Packaging visionaries get their just rewards 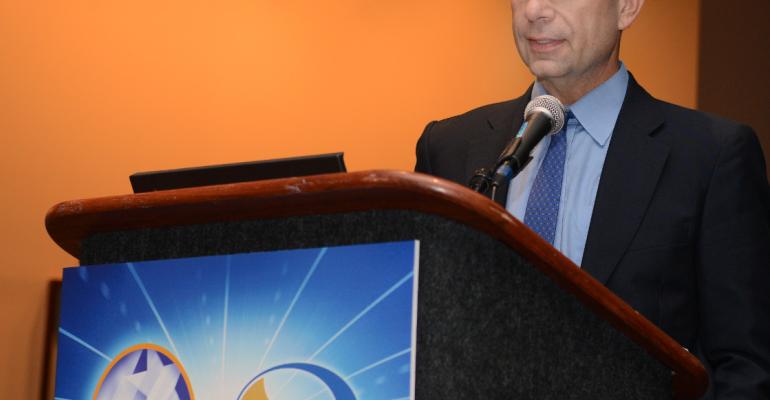 Oliver Campbell from Dell, giving his acceptance speech during the 2013 Visionary Awards ceremony.

“First, I would like to thank the Academy…Always wanted to say that… :)” That’s Oliver having a bit of fun when I asked him what it meant to him to win a Gold Award in our inaugural Visionary Awards competition last year.

But then he got quite serious in talking about how humbled and honored he was to be recognized as a Visionary. “This award demonstrates that sustainability and innovation have a major role to play in creating packaging that’s good for people, good for business and good for the planet,” says Oliver Campbell, director of worldwide procurement for packaging & packaging engineering at Dell, who won in the Design & Development category. “I hope the award inspires others to do the same.”

For Nick, who was on the team that won the Gold in the Production & Operations category, validation that they were on the right track was what gave him the most satisfaction. The team included dozens of people from Graco Inc., along with its customer Summit Brewing Co. Together they successfully installed an innovative on-demand hot-melt adhesive dispensing system for sealing cases in the brewery.

“We were in a unique position applying for this award. Our company is over 85 years old, and we're experts in fluid handling and dispensing equipment—but packaging was a new industry initiative for us. We were literally starting from scratch with both product and sales channel development with a goal of building a sustainable business in hot-melt dispensing for case and carton sealing,” says Nick Long, global product marketing manager for Advanced Fluid Dispense with the Applied Fluid Technologies Div. of Graco Inc.

“Having a panel of peers recognize the innovation and contribution to the industry was a rewarding experience,” Nick continues. “It validated that the effort we put in resulted in a product that resonated with the industry—that we had something that could really change the game. Of course we were able to leverage the award as a sales tool over the course of 2013 and into 2014—the value there cannot be overstated—but, for me personally, the most rewarding part was just knowing that we were on the right path.”

Whether it’s for validation or inspiration, being recognized as a packaging visionary is personally and professionally gratifying. It’s time you got in on the action. I’m excited to announce that we’re starting off our second year of our Visionary Awards, grateful for the opportunity to celebrate the people of packaging who guide—or perhaps goad!—others to greatness.

Is this you? Is it someone you work with? Enter now at www.visionaryawards.net.

We’ll keep you updated throughout the competition’s progress—look for our #PackVision tweets in the next couple months—culminating with the exciting revelation of winners at a ceremony held in partnership with the Institute of Packaging Professionals. IoPP will present its AmeriStar Package Awards and UBM Canon's Packaging Group will present its Visionary Awards on June 10, 2014, during EastPack 2014 (June 10-12) in New York City.

Hope to see you there—perhaps accepting your award…

How Can Manufacturing Close the Generation Gap?
Apr 21, 2022