Automation products for the North American packaging machinery sector generated sales of nearly $0.75 billion dollars in 2002, with motion and motor control products accounting for the largest percentage of these sales. Linear actuation equipment and vision products contributed significant percentages, as well, according to a recent report from IMS Research, Austin, TX. 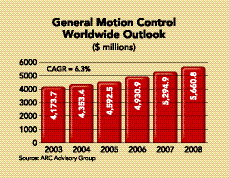 The IMS research indicates that growth in the industry is likely to be fairly consistent over the next five years, with a compound average annual growth rate for all products of 4.5 percent through 2007.

Worldwide outlook
The global general motion control market decreased significantly during 2001 and 2002 due to the low level of capital investments across most industries. But now, a more upbeat view of the market's future is emerging with a noteworthy increase in orders during 2003, according to a new study from ARC Advisory Group. That study pegs worldwide compound average growth rate (CAGR) at 6.3 percent over the next five years. The food and beverage industry, which was one of the stars during the bleak years, is expected to continue its stride as investments in consumer goods manufacturing remains bright.