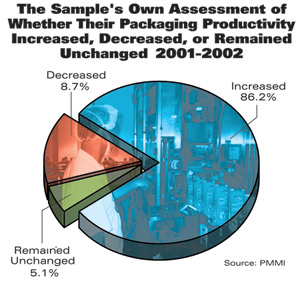 By any of several measures, packaging productivity rose significantly last year, according the biennial Productivity Trends Indicator study from the Packaging Machinery Manufacturers Institute. This reflects not only the dramatic improvements in output and efficiency derived from new machinery technology, but also the results of the greater emphasis that end users are now placing on all aspects of productivity measurement and strategies for enhancement. 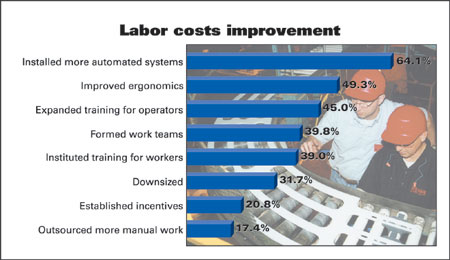 Packaging multifactor productivity considers the factors of employee benefits and wages, as well as packaging material usage and costs, and capital inputs such as machinery, energy and other related costs. As a result, this measure is more profit-directed. Based on the survey data, packaging multifactor productivity rose by 6.8 percent in 2002, reflecting largely the retarding effects of higher wage and benefit costs and higher material and energy costs. This measure, which differs in terms of specific input variables and method of calculation, is far less complex and more specialized in its focus exclusively on packaging. 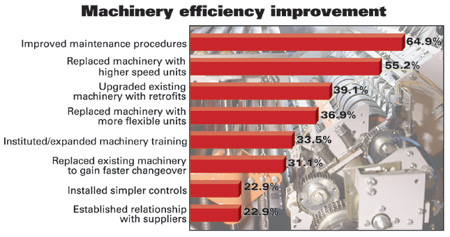 The study notes that 89.1 percent of the respondents measure their company's productivity on a systematic basis and take deliberate steps to improve their productivity. This sizable majority points to the importance assigned to the issue, especially because of the strong impact that productivity exerts on a company's profitability.

Consequently, the report explains, packaging professionals are expending greater efforts to eke out whatever gains they can. It has become widely accepted that, no matter how much incremental improvement is made in packaging productivity from one period to the next, further deliberate measures will net even more profit gains. But the key here seems to be "deliberate."

The survey shows that 54.6 percent of the packagers reported that their productivity increased, while only 7.6 indicated a decline, and 37.8 witnessed no change from the prior year. Not surprisingly, almost the identical number of respondents who reported an increase in packaging productivity also indicated that their company had either initiated or continued to pursue concerted efforts aimed at improving packaging productivity.

The four general areas where these action-oriented companies sought productivity improvement included labor costs and related issues (94.6 percent); machinery and equipment issues and efficiency (92 percent); packaging materials and container costs and issues (86.2 percent); and systems operations and performance measurement (83.1 percent). (See the accompanying charts for detailed numbers.) The methods by which these areas were addressed are as follows:

Labor costs: Companies installed machinery and systems with a higher degree of automation, possibly as a means of reducing the labor force, but also to better utilize line operators' time. Training was instituted or expanded, with the intent of improving operators' skills and abilities as related to machinery, controls and systems. The increasing reliance that packaging managers are placing on computer controls and more sophisticated systems has clearly brought a need for more in-depth training. 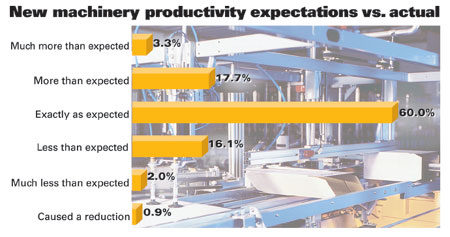 Also, a high number of packagers said they made attempts to improve worker ergonomics. Such voluntary attention reveals an awareness by management of the inherent benefits of ergonomically attuned machinery. As such, worker ergonomics is given justifiable attention in the selection of new equipment. A further consideration, companies reported that they established and nurtured work teams, and a resounding 91.4 percent of them claim that the work teams have helped increase productivity. Other measures mentioned in the survey included downsizing staff; establishing worker incentives; and outsourcing more of the manual work. While some companies did this as a means of survival, others used this as a strategic step. 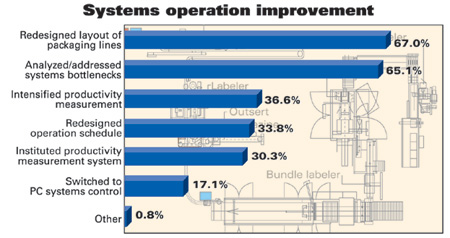 Machinery costs and efficiencies: The survey findings show that attention to packaging machinery efficiency and related costs offers the single best opportunity for achieving measurable productivity gains, both now and in the future. Nearly 80 percent of the packagers reported that the new machinery they had installed improved productivity exactly as expected or better than expected. In fact, in rating the effect that new machinery had on productivity, more than three-fourths of the firms that had purchased new equipment gave that investment decision high marks. Companies replaced existing machinery with higher-speed units and also invested in new machinery with greater flexibility for changeovers. Maintenance procedures were improved in order to minimize downtime, recognized as one of the most negative impacts on productivity.

Packagers instituted or expanded training for operators (also mentioned under labor costs), since the high-tech nature of current control systems and their operation presents a daunting challenge to untrained operators. As a corollary to that issue, existing equipment was retrofitted with state-of-the-art components; simpler controls were installed; and online diagnostics capabilities were initiated.

Packaging material and container costs: Any change in packaging material and containers can exert a profound impact on the plant's rate of multifactor productivity. Companies renegotiated material purchase contracts in order to lock in lower prices and ensure better service and availability; the volatile pricing situation in 2002 probably spurred contract renegotiations. Packaging was redesigned, ranging from subtle changes intended to cut costs, reduce waste, smooth the flow through machinery or reduce the steps in the packaging process, to a complete change involving a different type of container or new materials. Nearly half of the packagers who redesigned claimed that they did so expressly to improve productivity. Respondents said they took measures to reduce scrap, waste and rejects; changed to lower-cost or higher-quality materials that machine better; reduced material waste through better engineering; and changed to a lighter-gauge material. Lower costs for the new material or container and additional support from the supplier had the most positive impact. However, some packagers reported a negative impact from a materials change.

Systems operation and performance: Companies also addressed productivity enhancement from an industrial engineering standpoint, emphasizing efficiency measurement and organization, and through a systems engineering approach, addressing the packaging line layout. Two thirds of the packagers undertook a redesign of one or more lines in 2002. An essential step in the redesign or restructuring of a line involves the addition, reduction or rearrangement of shifts in order to improve labor efficiency and output gains. Productivity measurement systems were implemented by many companies that almost invariably led to immediate productivity gains. Others expanded upon existing measurements. Systems integration for tighter control and continuous monitoring was cited by a small number of packagers.

The best potential for yet further improvements in the packaging operation comes from addressing machinery efficiency, according to 46.4 percent of the survey respondents, followed by operator training (16 percent). 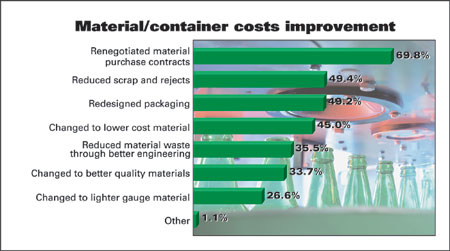 More than 1,000 respondents participated in this latest study. The research was compiled and written by Industrial Research Associates. The 2000 study, released in the fall of 2001, concluded that the technology driving productivity enhancement is still in its infancy, considering how much progress was made in just the past 10 years. Therefore, the prospects for further gains are immense, particularly in the area of packaging operations. 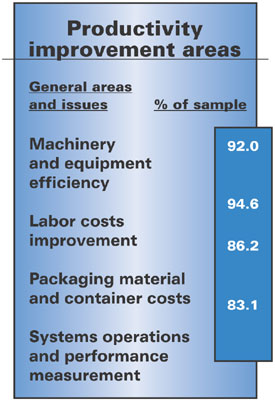 Respondents to the survey were asked which methods would offer the greatest potential for further gains in productivity. Nearly half of the packagers voted for machinery and equipment issues, precisely the same as in the prior study of 2000 results. Ranking a distant second was attention to systems operations, voted on by 20 percent of the sample. Coming in third was training for operators and other line personnel. The findings point solidly at the packaging machinery manufacturers, to whom the packagers look for better and more efficient machines that will, by themselves, increase productivity. Although the end-users acknowledge the great strides made by machinery manufacturers to this point, more than three-fourths admit they are not completely satisfied with the machinery currently available. Their complaints focused on high costs and inadequate technical support and follow-up.

Although the issue of productivity has been studied and discussed since its inception early in the 20th century, the report states, it has only been during the last decade that the concerted emphasis placed on productivity measurement and improvement has brought it to the forefront of world attention.