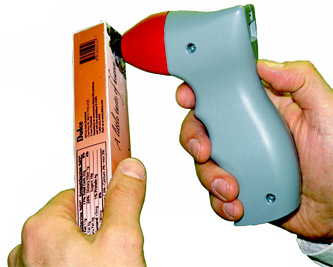 Product counterfeiting includes goods designed to mimic products or services provided by well-known brands or manufacturers. The counterfeiters set out to deceive consumers that the product they are buying is the real thing, when in fact it is an inferior imitation or an item that has not been authorised for sale by the brand owner. This definition includes look-alike products that aim to confuse the consumer by using brand names and packaging that look very similar to the authentic products.

Generic products are not included in this report. A generic product is a commercial product not protected by a registered trademark, or an entire group or class of products. An example is cola. There are competing brands of cola, such as Coke and Pepsi, but cola is also sold by supermarkets under their own private brands. Sometimes a proprietary product becomes available for other companies to supply. An example is a drug whose patent lapses.

Many tricks cheat brand owners
Parallel trading is driven by different prices in different geographic markets. A genuine product is brought from one market into another market without the brand owner’s agreement and often undercutting its distribution network. Sometimes this is done to avoid paying higher taxes. The Internet has created a global market and made it harder for brand owners to control where their goods are sold. Many people who do not want a counterfeit product will purchase a genuine item at a discount.

One of the food industry’s main concerns is the integrity of the supply chain. Tamper-evident packaging reassures consumers that an item has not been opened before purchase; it is the largest sector for brand protection. Product theft can be pilfering from a factory or warehouse, robbery during transportation, stealing from a stockroom or shoplifting by the public. Track and trace, tamper-evident packaging and security tags protect brands from product theft. 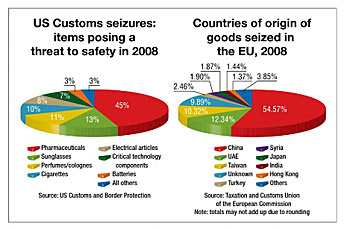 Global costs hard to estimate
The Intl Anti-Counterfeiting Directory (IACD) is published by the Counterfeiting Intelligence Bureau (CIB), a specialized division of the Intl Chamber of Commerce (ICC). The 2009 edition of IACD says that one of the most widely quoted statistics on counterfeiting is the CIB estimate that global counterfeiting is 5 to 7 percent of international trade, equivalent to more than $500 billion. This is larger than the gross domestic product (GDP) of more than 200 countries. No one really knows the exact value of counterfeit products worldwide, so people make estimates based on Customs seizures in the U.S. and the European Union, the primary destinations for fake products.

Most fake products are made in Asia. Organizations such as U.S. Customs and Border Protecction and U.S. Immigration and Customs Enforcement keep statistics on the number of articles seized each year. Along with statistics from local police raids and estimated losses from specific industry sectors, this data is the basis for estimates of the global value of counterfeiting.

Product seizures on the rise
According to January 2009 figures from U.S. Customs and Border Protection, the domestic value of goods seized for intellectual property rights (IPR) violations increased from $196.7 million in fiscal year 2007 to $272.7 million in fiscal year 2008, an increase of 38.6 percent. The total number of seizures increased by 9 percent from 13,657 in 2007 to 14,992 in 2008. Footwear was 38 percent of all seizures, or $102 million. Next came accessories (handbags, wallets and backpacks) at 11 percent and $29.6 million, pharmaceuticals at 10 percent  and $28.1 million, and apparel at 9 percent and $25.1 million (Figure E.1). Accessories, perfumes and colognes, and pharmaceuticals increased 100 percent from the previous year, but the largest rise was in the number of cigarettes seized: up 1,004 percent above 2007.

Pharmaceuticals was the largest sector among commodities where the authorities see potential threats to health and safety; next came sunglasses then perfumes and colognes.

The brand protection market, which includes the investment made by brand owners to protect themselves against product counterfeiting, parallel trading and other threats, is just a fraction of even the most conservative estimates of the total losses.

RFID, which currently has a relatively small market share, is expected to lead the technology sectors with a compounded annual growth rate of 26.9 percent in the next five years. Other technologies considered as a segment including 2D bar codes such as Datamatrix and QR codes, is projected to have 13.7 percent growth. Security printing, which together with substates, inks and coatings, and accounts for 60 percent of the total market, is expected to be slightly higher at 14.6 percent. Some competition also is expected to arise from new optical technologies, such as micro-optical arrays.

Examining the brand protection market’s geographical distribution, the study predicts that Asia has the largest share, with 30.9 percent. North America and Europe will account for 25.8 percent and 24.1 percent respectively.

Common measures to improve security
Brand owners and packagers employ a variety of both overt and covert measures on their packaging to ensure product security. The number of techniques used frequently is determined by a number of factors, such as product value, threat to human safety and sophistication of counterfeiters in a particular market.

Most brand owners are reluctant to reveal all methods employed, but they may rely on any combination of the methods listed here: