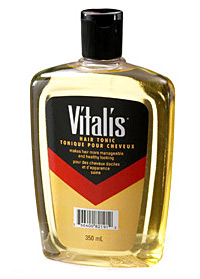 Hair care is one of the trendiest product categories in the world. Inextricably tied to fashion, exclusivity, and runway-strutting mojo, the stuff that people put into their hair is primped, preened, and styled as much as hair itself.

Then there’s Vitalis Hair Tonic. Considered in the Eisenhower era to be as fundamental a part of a man’s grooming regimen as soap, this heavy hair lotion is an intense artifact of a bygone time. With men’s’ hairstyles having evolved through at least 47 major epochs of fashion since the wet look of the 1950s, most people automatically assume that Vitalis Tonic went extinct decades ago.

We sure did. So imagine our surprise when we saw a whole row of this iconic decanter of gold hair elixir sitting proudly on the shelf – top shelf, mind you – of a large regional-chain grocery store.

Apparently rumors of its death are highly exaggerated. Look around on the internet - you can order Vitalis hair tonic from many places, including Amazon.com.

Oh sure, Vitalis has a whole line of more contemporary products, including shampoos, gels, and hairsprays. And the design of those other packages gives an appropriate nod to the energy-drink vibe of today’s men’s grooming products. But at the core of it all remains the classic Tonic.