Any way you slice them, the delicious smell of fresh-baked loaves, baguettes and French boules of bread from Maple Leaf Bakery are hard to resist. The growing bakery produces all sorts of breads, rolls and even frozen pizza dough, in assorted flavors, textures, shapes and sizes, sold across the country under the California Goldminer, Sourdough and Eurofresh Crust Breads brands. 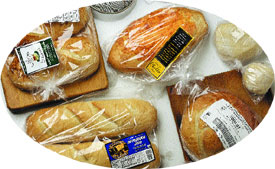 of Toronto-based food processor Maple Leaf Foods, produces and par-bakes the bread products to be "finished off" in the oven by in-store bakeries and restaurant and foodservice outlets across the U.S.

Today, the bakery enjoys less labor, improved ergonomics, less pallet-handling damage and tighter, more uniform pallet loads. In addition, line speeds have plumped up 3 percent to 5 percent, thanks to a set of four efficient, economical EZY-150 automatic palletizers from Wyard Industries. A fifth such palletizing system will be added to the plant this month. Handling & Packaging Automation, which represents Wyard, integrated all of the new equipment, supervised the installations, assisted with project scheduling, provided concept and equipment layout engineering and coordinated duties with the many equipment suppliers.

Last spring, Maple Leaf also installed a pair of case-erecting/bag-insertion systems on the plant's mezzanine level that include a pair of new Marq HME-MF case erectors and two new Model 202 case liner/bag inserters from OK Intl., for bread that's bulk-shipped in film-lined cases. All of this equipment was furnished through Associated Packaging. A few months later, Maple Leaf installed the Wyard palletizers and a new, FA-55 conveyorized automatic pallet wrapper from Orion, provided through Associated Packaging. Other new equipment on the lines includes empty-case handling and overhead conveyors from Hytrol and full-case conveyors from Ermanco. And there's more.

Maple Leaf wanted equipment that could be installed easily, quickly and with little if any downtime, Sautner explains. "We look to Associated Packaging for our packaging and automation needs, so again we contacted them for assistance on this project. They also suggested that we consult with Handling & Packaging Automation's Jim Gabriel, who is very knowledgeable in putting together auto-CAD projects and designing effective line layouts."

Change was needed
The par-baked bread is often so big that only a dozen loaves can fit into a shipping case. Therefore, cube space in a trailer is at a premium, Sautner tells PD. "We have to maximize space in trailers, because the bread is lightweight but large and takes up a lot of room. Before, we had people stacking cases on pallets in trucks as high as ninety-four or even one hundred inches, which is very difficult to do by hand. Our loads are also shipped by air, which can be quite costly." Not only was the palletizing job labor-intensive, but the operators also had to work in a refrigerated packing environment. "We had to find an alternative palletizing and loading method," Sautner says.

The bakery considered automatic palletizers for some time, but ruled them out for cost reasons. "With the new EZY and other systems, we cut labor from having fifteen people on the lines before to six," he tells PD. "Automating gave us the chance to reroute employees on the bread-packing lines to other areas within the plant. So the new equipment was a good value."

Easy to operate, the EZY-150 comes with a programmable user touchscreen monitor interface that displays current operational status, fault conditions, pack-pattern selection and warnings for low pallets and pallet presence in the staging area. Photoeyes, including pallet lift and in-load-position sensors, are incorporated throughout the system. Handling components include a pallet-dispenser lift, a drag-chain loading conveyor and a heavy-duty unloading conveyor.

Equipped with integrated case-handling and pattern-forming conveyors, pneumatic actuators and gentle, low-pressure/high-friction case-handling clamps or "hands" that release pneumatically, the EZY-150 is regulated by an Allen-Bradley SLC 5/03 programmable logic controller.

After the breads are partially baked, cooled and flash-frozen, they're case-packed in short runs that vary day-to-day by product, quantity and case configuration. Thus, the new equipment had to be versatile. Product changeovers can occur two or three times per shift. The new equipment can be easily changed from one pack pattern and case size to another with the push of a button on the PLC. Says Sautner, "Once we set case dimensions and configurations and give them a number, we can make a change in less than one minute." 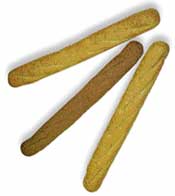 The palletizers were customized with an extended mast height to accommodate the 90-in.-plus-tall pallet load heights. Each system has a payload of about 200 lb. The systems are able to stack loads in a choice of hundreds of different pallet patterns, though Maple Leaf uses about 20 patterns, stacking eight to 11 cases per layer and seven to 10 layers per load, for up to 110 cases/load.

Bagging, casing, palletizing
The packing procedure line-to-line is basically the same, though there are some differences. After the bread is par-baked, cooled and frozen for 33 minutes, it's discharged from the freezer and travels to the refrigerated packing area. Meanwhile, on the mezzanine level, the Marq HME-MF case erectors automatically form and bottom-tape shipping cases on a just-in-time (JIT) basis, Sautner says. The machines can erect as many as 16,000 cases in a twenty-hour timeframe.

The erected cases proceed to the oversized bag inserters, which make bags from a roll of gusseted polyethylene film tubing (from several sources), cut bags to length and bottom-seal and place each bag into an incoming case before cuffing the bag over the case edges. The lined cases then convey down to the first-floor packing area, ready for filling.

Maple Leaf uses 14 to 18 shipping case sizes in various configurations and calipers. The majority of cases are provided by Smurfit-Stone Container in Roanoke, including a 275# test, double-wall corrugated, with a 48 ECT.

While this occurs, the par-baked bread travels on zero-pressure conveyors to the five packaging lines. There, the bread is sent through a new Loma IQ2 metal detector installed on each line that detects metal contaminants and creates a "detection log" that helps identify any patterns in metal contamination to trace the source. Afterward, a number of different things can occur depending on the line. On three lines, bread bound for supermarkets and in-store bakeries in bulk quantities conveys a bit further and drops into the waiting cases at the end of a conveyor.

On one of the small-loaf lines that PD toured, the bread is loaded in multiples into clear film bags (from several vendors) and case-packed by line operators. Sautner says these manual steps will soon be automated.

The case is then weighed on a Weigh-Tronix scale and discharged onto another conveyor to be tape-sealed on a Belcor semi-automatic Model 252 top taper before being ink-jet-coded by a Little David MicroJet printer from Loveshaw. The coded cases are labeled by a Paragon Expresse corner-wrap labeler, two of which are new, with product ID, a UPC bar code, final destination, Maple Leaf's logo and case contents. Palletizing is next.

Hands-off operation
Palletizing on the lines is basically operatorless. To start the sequence, an operator enters a choice of pallet pattern program numbers and presses the auto-start button. Once a load conveys to the palletizer, Sautner says, it isn't touched again until it's inside the freezer.

Changing pack patterns and case sizes is quick and painless, he says–a matter of pushing a button on the PLC controls. "We like the ease of operation and also the all-automatic pallet dispensing system."

Cases enter the infeed on each palletizer as a pallet is automatically positioned onto the loading platform. The cases move onto a 10-ft-long metering conveyor that uses rubber-coated rollers to separate cases transported to the station conveyor.

Each case passes from the metering conveyor to the station conveyor and is counted by a photoeye that monitors flow and enables the palletizer to associate each case with an orientation and load configuration. The station conveyor's steel rollers convey cases in between the case-gripping "hands" that pneumatically grip two or three cases at a time and place them on the pallet sitting on the turntable. The programmable pallet turner then can turn the load if necessary to accommodate specific pack patterns.

The PLC-regulated, pneumatically actuated case-turning arm swings out to change the case orientation. Should the stack pattern require spacing between cases, stops will engage and properly space the cases.

Loads are then forklifted to the nearby Orion FA 55 rotary turntable-support stretch wrapper, which uses the Insta-Thread™ high-performance film-delivery system.

Wrapped in PE stretch film from Pinnacle, the load conveys through an air-operated curtain door to a freezer equipped with an Orion pallet-roller accumulating conveyor, outfitted with low-temperature drives.

Benefits stack up
Output has soared. "The palletizers were a definite improvement," Sautner sums up. "We used to pack 5,000 cases a day. We've cut labor by more than half and now pack at least 17,000 cases a day. Everything is streamlined."