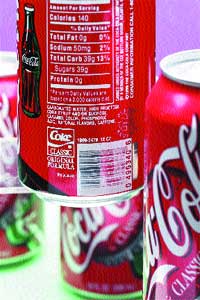 In 1971, a group of young people clad in peasant shirts and Nehru jackets gathered on a hilltop in Italy, holding glass bottles of Coke and singing "I'd like to buy the world a Coke," creating a legendary TV advertisement for the globally expanding Coca-Cola Corp. Today, all around the world, in nearly 200 countries, people are buying their own servings of Coke, or Diet Coke, or Coca-Cola Classic, or any other one of the company's 230 brands. In fact, the carbonated beverage leader relates that every 10 seconds, 126,000 people reach for one of their products, today sold primarily in cans or plastic bottles.

In the U.S., Coca-Cola holds a 36.2-percent volume share of the carbonated soft-drink market, which in '01 totaled more than $61 billion in retail sales. Given such massive volumes, it should come as no surprise that just satisfying the refreshment requirements of Coca-Cola drinkers in an area as limited as Chicago and its outlying suburbs is a monumental undertaking. A trusted business partner in this task is Chicago-based Rexam Beverage Can Americas (Rexam BCA), the largest sector of Rexam PLC. Headquartered in London, Rexam PLC is the fourth-largest consumer packaging company in the world.

Rexam BCA quenches the thirst of Chicago-area Coca-Cola franchise bottlers for decorated aluminum can bodies from a three-line, 275,000-sq-ft manufacturing plant in Chicago. The facility, opened in '82 and expanded in '95, boasts an output of more than 1.8 billion 12-oz aluminum soft drink cans per year. Half of this volume is shipped to Coca-Cola bottlers in nearby areas that include Alsip and Niles, IL, and Indianapolis, IN.

Relates sales manager for Rexam BCA Chicago Robert McKinley, along with the cans' ability to run problem-free on filling lines, speed of turnaround–from design to spec to can manufacturing–is also of primary importance to Coca-Cola bottlers. "Where the beverage can industry is unique is in how fast we can turn around a customer's desired brand image from design to beverage package production," he says.

Enabling Rexam BCA to provide one of the quickest response times in the industry, Chicago plant manager Dave Lewis told Packaging Digest during a recent visit, is the company's graphic art and technical center, combined with the dedication of its manufacturing plant employees, who work with equipment selected to run well and fast.

While this article explains the plant's speedy palletizing and warehousing capabilities, as well as its complete production line, the article on page 78 offers insight on the genesis of the Coca-Cola Classic can design.

Palletizer stacks gently, but quickly
Original to the plant and expanded upon since, three high-level palletizers from Goldco Intl. are the linchpins for an end-of-line system that yields nearly 35 to 40 truckloads/day of decorated aluminum cans. The palletizers, reaching 20 ft off the ground and capable of speeds from three to 10 pallets/min, quickly form pallets holding more than 8,000 cans, while gently handling the lightweight containers.

Notes Lewis, the equipment was selected for both its speed and its automated features. "Palletizers have evolved over the years," he says. "Where once they required more manual operation, they now have progressed to the point where they are completely automatic. The operator merely has to oversee the machine."

During operation, decorated cans are conveyed upward to the palletizer's second-story platform, where they are gathered in groups of approximately 380 on the machine's Airliner™, a laned air table that produces properly nested, void-free patterns. A mirror above the table allows operators to do a visual inspection of cans to ensure container integrity.

On the ground level, forklift operators feed the palletizer with 44 x 56-in. plastic pallets, which are automatically sequenced by the machine. When needed, a pallet is raised to the level of the accumulation table, and a stagger arm sweeps a pallet-layer worth of cans onto the pallet. A patented four-sided squaring assembly then squares the layer to ensure a tight, even fit.

Via Goldco's servo-driven Autoserter™ "top-drop" layer pad placement system, a plastic separator sheet is placed on top of the layer. The pallet then descends to bring the separator sheet level with the air table, allowing another layer to be swept on. This process repeats itself until the pallet is 21 layers high, at which time it is released from the palletizer and conveyed to an area where operators cap it with a plastic top frame.

Strapper secures the load
Weighing about 400 lb and consisting of more than 8,000 empty cans, the finished pallet load is especially susceptible to abrupt movements. Ensuring its stability is the job of two 40-pallet/hr Cyklop strappers, which concurrently apply straps to each load. Rexam BCA Chicago operates five of the machines: one for each line, one that serves all three lines and applies the second set of straps, and one for backup.

When a pallet is conveyed to the first strapper, a platen descends onto its top frame and holds the load in place, while a plastic strap winds its way around the pallet by way of channels. The strap is then pulled tight and secured by dry heat. Two straps are added to the pallet's longer edge before the pallet is released and conveyed to an inspection area where the proper job ticket is added. A second strapper then adds two to three more straps.

AGVs ease pallet movement
Moving the pallets from the strapping area to the facility's 150,000-sq-ft warehouse is the job of two Automated Guided Vehicle systems (AGVs) from HK Systems. Traveling along magnets embedded in the warehouse floor, and directed by HK's Eagle II™ wireless navigation technology, the AGVs, holding one pallet per trip, convey their loads to a specified staging area. From there, forklift operators pick up the pallets and place them, two at a time, in the warehouse stacks.

On the day of PD's visit, Rexam BCA Chicago's 125-million-can capacity warehouse held row upon row of finished cans ready for filling. According to Lewis, the facility was stocking up in preparation for its busiest months of May and June.

Tracking the location of the orders in the warehouse comes under the purview of the plant's shipping supervisor, who is aided by a temporary software system that follows the movement of live inventory. Notes Lewis, future plans for the warehouse include the installation of a SAP system, creating a "visual warehouse."

Can production
Downstream of the palletizing and storage operations is where the Coca-Cola Classic cans are brought to life from aluminum sheet. The containers, which are standard, die-necked, two-piece cans with a 202 neck diameter, a 211body width and a 413 height, begin production in the same way as all cans produced at the plant.

First, an ASC double-arm uncoiler feeds aluminum sheet from either ARCO Aluminum or Alcoa into a can stock lubricator, also from ASC. Next, the aluminum is fed into a Minster multi-out cupping press that punches the sheets into cups, which are then shaped into cans by a number of Standun bodymakers from Sequa Can Machinery. After shaping, can rims are trimmed by a Belvac can trimmer, and can bottoms are formed using a Pride domer.

Removal of the previously applied lubricant from the formed cans is done by a five-stage washer from Cincinnati Industrial Machinery. The washer also applies a chemical coating to the exterior of the cans, adding easy-handling characteristics.

After washing, cans are conveyed to Rutherford decorators for printing, and are then varnished with a coating from PPG that gives them gloss and shine, as well as extra protection. An initial bake begins the varnish-curing process, as cans are moved through a Ross pin oven.

To ensure mobility of the cans through the balance of the line, as well as through customers' filling lines, Rexam BCA applies a rim coating to the bottom of the can using equipment from Belvac. Next, the cans' inside surfaces are sprayed, using machinery built in-house, with a coating formulated to protect the beverage in the can from the aluminum. An Inside Bake Oven, also from Ross, provides the final cure, baking the inside spray at temperatures up to 400 deg F.

The last portion of the production process involves reducing the diameter of the can's neck to a 202 size. First, wax is applied to the can to provide lubrication, and then the can is sent through a company-built necker flanger that works the metal and then flanges the rim over to accommodate the can end (also supplied by Rexam BCA).

Quality checks for finished cans consist of analysis by several camera systems. These include the Pressco Extractor, which provides a 180-degree inspection of the can's outside surface; the Pressco Interrogator, inspecting the inside of the can; and a Reynolds light tester from Alcoa, used to detect pinholes and other defects in the can.