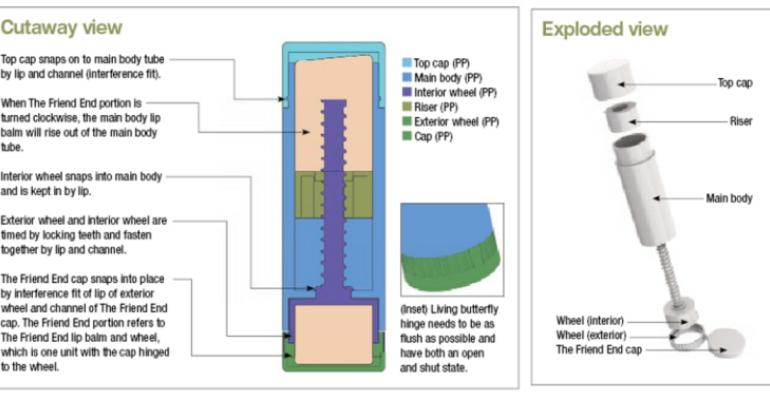 The Friend End is similar to a typical lip balm tube, where the main compartment holds the product and users twist the bottom to raise and lower the solid lip salve. But the bottom flips open to reveal a second pot of balm for hygienic sharing.

Balm Chicky Inc. founders Abby Schwalb and Elizabeth Moskow didn't take no for an answer when one packaging supplier after another said the package they envisioned wasn't possible or they weren't interested in making it. The two partners knew their idea for The Friend End—a lip balm cylinder with a second stash of balm stored in the base—solved an unmet consumer need.

"The Friend End design idea stemmed from a simple act that so many of us balm users encounter—pulling a tube of lip balm out of your pocket or bag and having a friend, co-worker or someone else ask if they can borrow your balm for their own chapped lips," Schwalb says. "We've noticed that, like yawning, using lip balm is almost a contagious act and so lip balm borrowing runs rampant."

Most people hand it over, some reluctantly, because they don't want to appear selfish or uncaring. But being nice might not be best after all. What they're most likely sharing are germs, especially during cold and flu season. Moskow explains, "The skin on our lips is very thin and when lips are dry—the time we're most likely to use balm—they often have small cracks or tears in the skin membrane. Germs more readily enter the body through these dry lips, making people more susceptible to germs and infection." 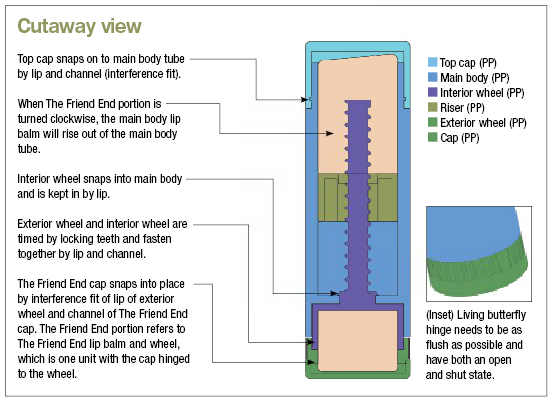 The Friend End is a simple, hygienic solution. It's similar to a typical lip balm tube, where the main compartment holds the product and users twist the bottom to raise and lower the solid lip salve. But the bottom of this tube flips open to reveal a second small pot of balm inside the base, enough for about 20 uses.

When someone asks to borrow your lip balm, you could, without hesitation, turn it upside down, flick open The Friend End and hand them the tube. This way, you can share lip relief with your friends while keeping the main stick pristine for your lips only. 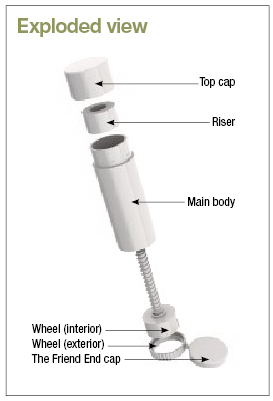 Finding the right friends
Commercializing The Friend End has taken about two and a half years. Schwalb and Moskow first had the idea back in August 2008; then registered their company in 2009. The plan is to launch their own branded product this spring, Balm Chicky Balm Balm (inspired by the ‘70s adult film genre), as well as to license The Friend End to other lip balm or cosmetic companies.

With no prior experience in packaging, the partners learned as they went, making tweaks along the way. "We hardly knew what injection molding was two years ago," Schwalb recalls. "We've done all of our own research via communicating with plastics companies, filling companies, engineers and filling tray manufacturers. It's been a very grassroots process."

The pair fielded disappointments along with the thrills, as they unexpectedly faced brick walls when they approached a number of established U.S.-based suppliers. "No one wanted to risk working with a new company—and they weren't interested in innovation," Schwalb says. "We were shocked that, rather than helping us figure out how it could be done, we were told over and over why it could not. From salesmen or reps not following up, to being blatantly lied to, we were surprised that, in this type of U.S. economy, more companies weren't concerned with customer service or taking any initiative into a new arena that could prove to be wildly successful."

Still believing The Friend End was viable, the team hired Seattle, Wash.-based freelance engineer Jeff McCasky of McCaskey Design and Development to do CAD drawings. Used in a Design Intent document, the drawings show the package's functional design through multiple views, including exploded and cutaway (see both on page 23). Using McCasky's CAD model, they had a prototype made so they had a physical sample to show potential manufacturers.

Although Schwalb and Moskow wanted to make the product and package here at home, they eventually had to broaden their horizons to find a willing partner to make the unusual tube. They met a number of Asian injection molding companies at the 2009 HBA Global Expo and started what turned out to be a long and enlightening process.

"After a year of continued talks, letdowns and poor options, I received an e-mail from one of the Chinese companies we had met at HBA," Moskow says. "They were willing, able and now more English friendly to engage in a partnership to produce our mold for a reasonable price—almost a tenth of what any U.S. company was quoting us."
As of press time (mid-January 2011), the Shanghai supplier, Wuxi Sunmart Science and Technology Co. Ltd., was just finishing the injection molds, with plans to start tube production shortly thereafter.

Double the pleasure
Product formulation, filling, labeling and final packaging operations will be done in the U.S. at a contract filler. Balm Chicky Inc. was close to deciding which one of two finalists at press time. But the production process will likely be the same:
• Empty PP tubes will be inserted face up in a titanium holding tray (most probably custom made).
• The liquid balm, formulated in 100kg kettles, will be poured over the tray to flood the tubes.
• Once the product sets (dries), excess balm will be scraped off and returned to the kettle.
• Tubes will then be flipped over, and The Friend End filled the same way.
• Double-filled tubes will be capped (both ends), then labeled, overwrapped and packed 24 or 30 to a case. 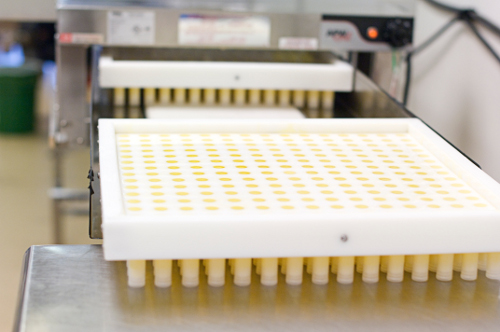 Schwalb explains why they decided to package the tubes singly and simply: "We thought about having an external box as with other prestige products, but both of us are conscious of the impact Balm Chicky has to our environment and didn't want to generate additional waste through excess packaging. Also, since The Friend End feature is such a profound marketing tool, we didn't want to enclose and hide the concept in a box."

License to kill
No joke: April 1, 2011, is the target launch date for Balm Chicky Balm Balm. It will be sold for a suggested retail price of $7 per tube in prestige cosmetic stores, kiosks and upscale boutiques in Portland, OR, to start, with hopes to distribute across the country as soon as possible. Their plan is to make The Friend End a household name for everyday balm users or for anyone who is concerned about personal hygiene and keeping their own balm end sanitary.

Additionally, Balm Chicky Inc. is actively seeking an exclusive licensee for The Friend End, and is open to other licensing options "if the fit is right," Moskow says. The concept could easily be used with other products, too, such as medicated brands and ski/surf/sport products.

"We really want to let other companies know that The Friend End technology is a sure-fire way to bring attention and increased sales to your brand," Schwalb says. "Differentiation is the name of the game in the cosmetics world and it's not often that a package feature is not only different, but also serves an important function."