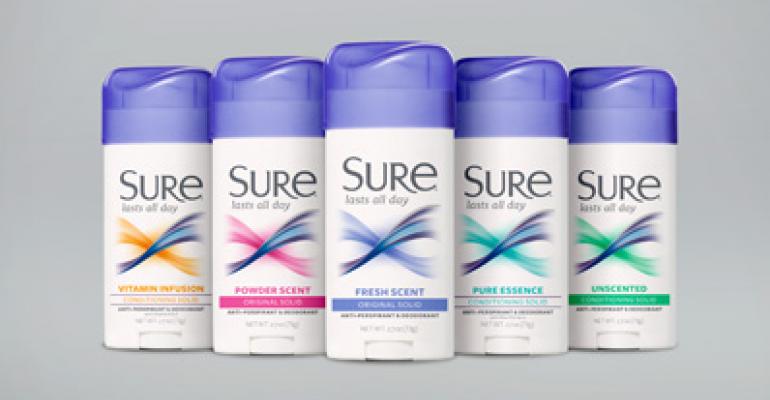 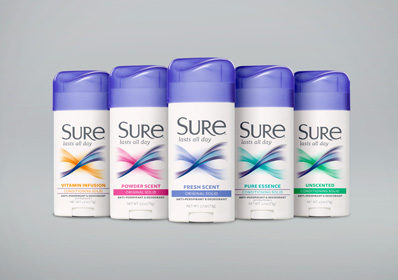 Since SURE deodorant was first introduced as a unisex product back in 1973 (anyone remember their jingle: Raise Your Hand if You're Sure?), the competitive set has gotten quite extensive and equally complicated. Now owned by Idelle Labs, the brand is being refocused to appeal to women with the promise of, "Lasts All Day." New York-based Beardwood&Co., the brand and innovation firm, was tapped by Idelle Labs to develop a new identity as well as structural and graphic packaging to rekindle brand awareness and communicate its benefits to consumers on shelf.


"We began by focusing on the brand benefit: powerful antiperspirant/deodorant protection that a consumer doesn't have to smell, feel or think about," says Ryan Lynch, managing partner, Beardwood&Co. "The challenge was to create feminine appeal balanced with the strength and protection that are at the core of the brand's positioning," he adds.

The Beardwood design team, led by Sarah Williams, partner/creative director, then went to work on creating a balance of white space and color with cool tones that pop, yet are sophisticated. Central to the identity is a new logo and infinity symbol that consumers in focus groups agreed signified that the product really works. The logo's strong, modern typeface provides increased legibility and recognition while its dark color pops in contrast to the white package structure. A new custom closure and graphics in a purple color palette help it stand out in a crowded category. Bright pastel hues identify the fragrances for the 5 skus while further expressing the positive attitude and trusted protection. "The custom cap and purple color act as a beacon on shelf while also communicating a premium image," says Williams.

"We're confident that our new identity and packaging for SURE will be a winner on shelf and will not only bring back former customers, but will encourage trial by new users as well," says Rick Cutler, senior director, North America, Idelle Labs.