HomePharma & MedicalPharmaceutical PackagingHeadache-powder packs face off for charities
Recent
Pharma & Medical
What’s Happening with Chemical Recycling for Plastic Packaging?
Nov 29, 2022
To Attach or Not to Attach Thy Cap, That Is the Sustainable Question
Nov 29, 2022
Smart, Connected CPG Operations: a Roadmap for the Digital Future
Nov 28, 2022
Stabilization Technology Delivers Sustainable HDPE for Blow Molding
Nov 28, 2022
Do You Regret Some of Your Sustainable Packaging Decisions?
Nov 23, 2022
Best in New Food and Beverage Packaging
Nov 23, 2022
Breaking News in Flexible Packaging
Nov 23, 2022
Who’s Really Moving the Needle on Sustainability?
Nov 23, 2022

Headache-powder packs face off for charities 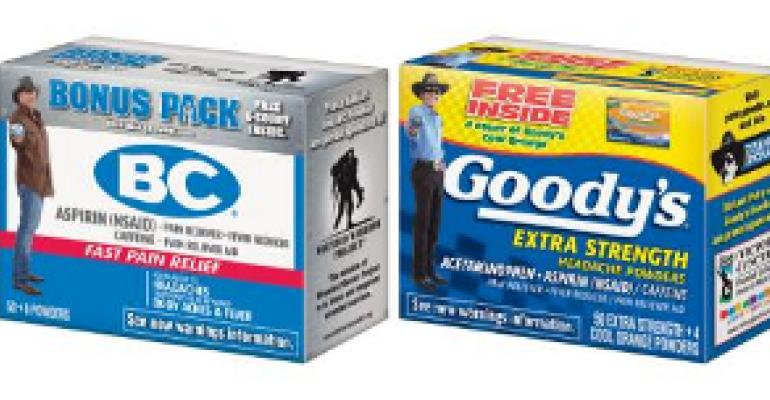 Fans of BC and Goody&#039;s powders will notice new packages on the shelves branded with familiar faces and charity logos. The new packaging showcases the support of two charities personally selected by country music superstar Trace Adkins and racing lege

Fans of BC and Goody's powders will notice new packages on the shelves branded with familiar faces and charity logos. The new packaging showcases the support of two charities personally selected by country music superstar Trace Adkins and racing legend and NASCAR Hall of Famer Richard Petty.

For a limited time, consumers will find Trace Adkins and Wounded Warrior Project (WWP) on select boxes of BC, and Richard Petty and Victory Junction on select boxes of Goody's. With each purchase made between Jan. 1 and Mar. 31 of these specially-marked boxes of BC or Goody's, fans of Richard Petty and Trace Adkins will be helping to give back to the organization affiliated with each man and each brand.

The release of the new packages of BC Powder and Goody's Headache Powders is a part of the Pick A Powder campaign sponsored by BC and Goody's in which Adkins and Petty have been competing in a friendly rivalry since the summer of 2010. For the campaign, the two celebrities have gone head-to-head in each other's "worlds" to see which one of them experiences the most pain and which brand-between BC Powder and Goody's Headache Powders-has the most loyal users around the country.

"With this charity component of the Pick A Powder campaign, now the loyal fans of BC and Goody's can team up with Team Trace and Team Richard to help the two charities and benefit wounded service members and chronically ill children across the country," said Traci Plate, Powders Brand Manager, GlaxoSmithKline. "This is also a great opportunity for fans of the powders as well as fans of Richard and Trace to purchase limited-edition branded items for keepsakes."

According to Wounded Warrior Project, more than 40,000 of our nation's armed forces have been physically wounded during the current military conflicts. Hundreds of thousands more are estimated to be recovering from invisible wounds of war, including post-traumatic stress disorder, major depression, and traumatic brain injury.

"This is a wonderful partnership between BC Powder, Trace Adkins, and Wounded Warrior Project, and a great way for consumers to support our injured servicemen and women," says Adam Silva, chief development officer, Wounded Warrior Project. "Trace Adkins has been a long-time supporter of WWP. Fans of his and ours can now use their purchases to voice their support and make a difference in the lives of our wounded warriors."

Victory Junction is a year-round facility located in Randleman, NC, that is committed to providing children with serious and/or ongoing health issues an opportunity to attend camp and enjoy inspiring and rewarding experiences just like any other child. The organization holds a special place for Richard Petty because it was founded by Kyle and Pattie Petty in honor of Richard's late grandson and former NASCAR driver, Adam Petty, who had the dream to start a camp. Today Adam's dream lives on in the children who attend Victory Junction as well as the donors and volunteers who help fund and support these life changing experiences.

"It is an honor for our organization to be a part of this campaign in partnership with Goody's Headache Powder and one of our biggest supporters, my grandfather, Richard Petty," says Austin Petty, evp, Victory Junction. "Victory Junction strives to make a positive and lasting impact in the lives of so many children who need us and now Goody's users can have that same impact for our children for years to come. Camp supports Team Richard all the way!"

Adkins and Petty have both recorded messages in support of the charities that can be found on the Pick A Powder campaign website. During the first weekend of April at the Goody's Fast Relief 500 in Martinsville, their respective charities will be presented with a check from BC and Goody's to continue their work and missions.