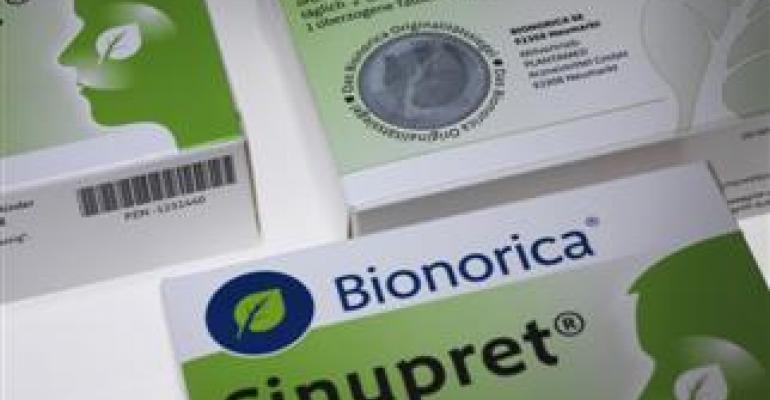 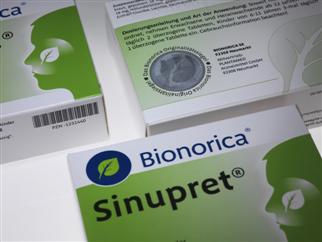 Anyone who buys Sinupret sinusitis tablets from pharmaceuticals producer Bionorica will now see on the folding carton a three-dimensional, optically variable, embossed mark, which can be seen in relief when the carton is tilted. In view of the fact that the herbal medicament was so often copied, Bionorica engaged the Munich company Giesecke & Devrient, which specialises in printing bank notes, to design this tangible security feature for Sinupret. Artur Theis, a subsidiary of the Edelmann Group, developed the production process for the new packaging. The mark is printed and embossed by Braun Pharmadruck - also an Edelmann subsidiary - in Bitterfeld. Sinupret, one of the most popular products on the cold treatments market, is just the start: by the end of 2011, Bionorica intends to emboss the packagings of all its product ranges with the new quality seal. "We want to provide the best possible safeguards for pharmacies and users", says company head Michael Popp.

Producers who have problems with counterfeiters must make their products uniquely identifiable. This is especially true in the pharmaceuticals sector. "The danger of counterfeit medicines is growing", says Ulrike Holzgrabe of the German Pharmaceutical Society (DphG). Although producers of pharmaceuticals suffer losses amounting to billions of euros each year through product piracy, this is not the main problem, for counterfeit medicines threaten the health or even the lives of unsuspecting patients.

The Internet is a weak spot

According to EU figures, in 2009 the German customs authorities seized counterfeit medicines to the value of 11.5 million euros - 30 percent more than in the previous year. Moreover, a World Health Organisation (WHO) study claims that even in supposedly safe regions such as Europe and the USA, up to 10 percent of all medicaments are counterfeit. In Germany, according to Holzgrabe, the proportion of such counterfeit products is about five percent. "But this is just the tip of the iceberg", she suspects. Mail order business offers criminals the greatest opportunities. This sector is booming, especially in Germany. Marketing research firm ACNielsen estimates that sales of non-prescription drugs increased by a quarter last year. According to the consumer research consultancy company GfK, one in four Germans now obtain medicaments through this channel. At the same time, it is apparently becoming harder for consumers to distinguish between reputable mail order pharmacies and illegal traders. Test purchases by the Central Laboratory of German Pharmacists confirm counterfeiting rates of 50 percent for medicines sold by, for example, illegal Internet pharmacies.

"Producers of pharmaceuticals are therefore more willing to look at methods of providing better security against counterfeiting", says Holzgrabe. The companies have two aims: firstly, consumers should be able verify that they have received an original product; and secondly, experts should be able to identify counterfeits when they carry out checks. The most active companies include not only medicinal plant specialist Bionorica but also Bayer Healthcare, whose products are among the most frequently counterfeited worldwide. The company therefore explains on its website (www.vorsicht-faelschung.de) how patients can distinguish between original Bayer preparations and imitations. In future, Bayer Healthcare will also provide its medicament packagings with counterfeit-proof features. The Leverkusen-based company has also engaged Artur Theis for this project. "Our task is to make the security features suitable for a folding carton production line, and then for series production", explains Ulrich Dörstelmann, head of the counterfeiting security department at the Edelmann subsidiary.

Based on banknote printing

In Germany, Artur Theis is regarded as the specialist for uncopyable folding cartons. The conditions in its Wuppertal plant, which has been converted into a pure counterfeiting security facility, are the same as those in a banknote printing works: there is strict access control to the production section, the security zones are taboo for most of the personnel, and all processes are exactly documented and archived. The degree of meticulousness is so far unique in the German packaging industry. The result of the cooperation with Bayer Healthcare is, says Dörstelmann, a sort of lenticular image that cannot be imitated by counterfeiters. "We combine printing and embossing technology and use UV security inks."

The EU, however, requires yet another step to be taken by the pharmaceuticals industry to ensure greater patient safety. Industry Commissar Günter Verheugen announced that in 2011 there will be a standard procedure at EU level in the fight against the counterfeiting of medicines. In 2008 the Commission proposed that medicament packagings should be protected by a security mark, and that in future it should be possible to retrace their path from the counter back to the factory. The WHO is also a strong supporter of counterfeit-proof labelling. Producers of pharmaceuticals are therefore pushing for the introduction of an electronic proof of origin in the form of a track and trace system, with the help of which the complete supply chain can be monitored.

In order to test and demonstrate coding and identification solutions, the European Federation of Pharmaceutical Industries and Associations (EFPIA) launched a pilot project in Sweden in September 2009. For several weeks, medicament packagings for 25 pharmacies in the Stockholm region were provided with a two-dimensional data matrix code. This can hold more information than a simple bar code. In the Swedish project, it contained an article number, a batch number, a use-by date and a serial number. At the pharmacy, the code was scanned and compared immediately with an entry in a database. The whole process took only a few seconds, so that counterfeits were immediately identified. Only after this security check did the customer receive the medicament. About 100,000 medicament packagings were tested using this system - with great success, as the EFPIA reported.

Experts therefore confidently expect the track and trace system to be implemented throughout Europe in the near future. "The EU's pharmaceuticals package could become law in 2010", says Dörstelmann. Manufacturers of machinery and systems are well prepared for a switchover. Optima Group Pharma, for example, based in the Swabian town of Schwäbisch Hall, specialises in filling and sealing syringes and vials. It already offers, on request, coordinated track and trace solutions for producers of pharmaceuticals. "Ready-to-use syringes are stored and transported in special syringe nests in plastic boxes referred to as tubs. Our machines label the containers, so that they can be traced at any time", explains company spokesman Henning Felix. Bosch Packaging Technology, which supplies filling, processing and packaging technology for the pharmaceuticals industry, also has printing and tracing equipment in its portfolio. Bosch product manager Daniel Sanwald explains the function of the printing module as follows: Each minute, up to 400 folding cartons are transported on a conveyor belt at high-speed through a printer, which labels each carton with a data matrix code containing a production number, use-by date and serial number. A camera subsequently checks and verifies the code. The data are finally stored on a high-capacity central server, from which they can always be called up. If a product that cannot be identified in this way turns up in a pharmacy, it must be a counterfeit. "If track and trace becomes mandatory, thousands of production lines will have to be retooled. We can see enormous market potential for our technology", says Sanwald. At interpack 2011, the most important event in the worldwide packaging sector, manufacturers of machinery and systems will present their track and trace solutions from 12 to 18 May 2011.

A security offensive by producers of pharmaceuticals would also increase demand for high quality packaging materials producers. In order to cut costs during the economic crisis, many companies bought packagings and packaging components for their medicaments in China. The disadvantage is that these products are often of poorer quality, so that dosage sprays, catheters or pumps, for example, may not function correctly or may break more easily. "All those who subscribe to patient safety, and who want to send a clear signal that quality is a top priority, will no longer use these products in future", says Peter Rösch, head of sales at atomiser pump manufacturer Aero Pump situated in Hochheim am Main. He can see a large market for his company's quality products: "We put a high priority on dimensional accuracy and precision, and we invest heavily in quality assurance and innovation", says Rösch. Aero Pump will also present its innovations at interpack.

It is unlikely that pharmaceuticals counterfeiters will be attracted by medicaments that have been provided with a security mark, a code and a top quality packaging. However, there are still many obstacles on the path to obtaining maximum patent protection. An enormous investment is required in order to retool packaging lines, and this could prevent pharmaceuticals companies from acting quickly. Even if the EU rapidly approves its pharmaceuticals package, the implementation process could take years. Another aspect that has yet to be clarified is where all the data associated with a pan-European track and trace system should be stored. Will there be several geographically dispersed servers or one central system? "And then someone must be the owner. This raises the question of who trusts who?", says Bosch manager Sanwald.