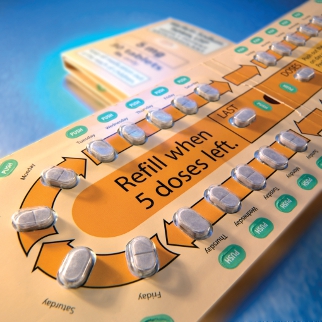 Not taking their medications as prescribed, a.k.a. non-adherence, costs Americans dearly. In July 2008, the Journal of Managed Care Pharmacy cited poor adherence in the U.S. as the primary cause for 125,000 deaths annually and an estimated 10 to 25 percent of hospital and nursing home admissions.

So how can we improve adherence?

A new white paper from the Healthcare Compliance Packaging Council (HCPC) compiles the results of eight separate studies conducted over the past two decades that support the use of compliance-prompting, calendarized packaging as a successful tool for improving patient adherence. (See "8 studies; 1 conclusion" below.) The white paper—which also identifies passive, active and interactive packaging solutions available today—can be downloaded for free at www.hcpconline.org.

Walter Berghahn, HCPC executive director, and president of SmartRmeds for Life, says, "We've collected these results in one comprehensive document that supports greater use of compliance-prompting packaging to improve patient adherence and improve health outcomes. At a time when healthcare costs are out of control, here is a simple solution that can have significant impact on cost reduction."

Packaging Digest recently talked with Berghahn about the state of the compliance-prompting packaging market and how it can be improved.

Q. What types of compliance-prompting packages are currently available?
A: Probably too many to list. But if we define it as a package with graphics, text or other features that prompt patients to take their medication, we can include:

Q: What percentage of Rx medicines are now packed in compliance-prompting packs?
A: The best I can do here is extrapolate, since there are no hard figures.

Currently we dispense 3.4 billion scrips a year in the U.S. Approximately 12 million women use birth control pills in the U.S. x 12 months so 144 million packs. Walmart's use of MWV's ShellPak is estimated at 130 million packs from various sources.

Companies like Anderson [now AndersonBrecon], Catalent, Sharp, BurgoPak, StoraEnzo, Keystone, Intini, Rondo and Nosco all have commercial applications of their proprietary-designed compliance formats in both branded and generic pharmaceutical applications. If each of them only has 3 to 4 million units annually—which I think is low—that would add another 25 to 30 million units. So...solid known numbers of 275 million between birth control and Wal-Mart. The rest could be another 60 to 70 million, but I don't have any figures to support this.

One other point: Bar-coded blisters, Hospital Unit Dose (HUD), are used in more than 20 percent of hospitals in the U.S. While lacking the calendarized feature of many compliance packs, the sole purpose of this format is to assist in the accurate administration of medications in an institutional setting with the goal of reducing errors (right patient, right drug, right dose, right time)—a key form of compliance.

As well, the growth of the 28- to 30-count "bingo" blister cards in long-term care settings continues—to, again, reduce errors and manage complex regimens. I don't know the percentage of LTCs, nursing homes and such that use these, but I can't recall being in one within the last five years that didn't. Not sure what this adds to the doses managed but it would be significant and it would take the nationally recognized number for blisters up significantly. I think estimates are still 8 to 10 percent of doses in blisters.

Q: What is holding back broader conversion of Rx meds into compliance-prompting packs?
A: Have you got a while? In broad topics, the hurdles are child resistance (CR), the manufacturers, pharmacies and insurance reimbursement.

CR has been overcome for the most part. Any company designing a compliance pack is targeting an F 1 CR rating. This increases cost and increases complexity for senior users. It is what it is. I don't expect that the CPSC is going to change their requirements and I don't think they should. But I think CR caps get a cheap ride. We all know (including the CPSC) that CR caps, once opened, are often not resealed, leaving the entire contents available to kids-and yet we rate a package's safety on the single opening event. With most CR blister packs kids have to defeat the CR feature again and again to access additional doses. That time lapse increases the likelihood that a parent or adult could intervene. With a pharmacy vial, one loose cap and up to 90 doses are immediately available-but that is a discussion for another day.

Starting with manufacturers: Despite the evidence that shows compliance prompting packaging could increase sales by 8 to 14 percent conservatively (that would do it for me), they are reluctant to move more products into compliance format for several reasons: (1) capital equipment costs—they would need to invest in unique lines to produce compliance formats; (2) output—these lines will have reduced output (throughput) compared to a bottle line; (3) costs—for established drugs with established reimbursement rates, there is no money for additional packaging. I don't think pharma engineers can convince their management that this investment will pay off.

Also, and this is a weird one, I seriously wonder if there isn't a concern over liability. Imagine you are Pfizer or Merck and you select a compliance format for a major product. It produces better compliance rates and, hence, better outcomes for the product. If you don't select this for other products, do you create implied liability? That is, you know a package form increases compliance and you elect not to use it.

At the pharmacy level, it is more straightforward. We have a well-established practice of manually filling in the pharmacy and using bottles/vials. Some scrips are filled in central locations and delivered in bottles ready for dispense. It is amazingly difficult to break this paradigm. As well, pharmacists do complain that compliance forms take up more room on pharmacy shelf. This one I've never understood since pharmacies receive shipments on a daily basis. Also, compliance forms would actually reduce inventory.

On the insurance front, reimbursement is generally related to 60- or 90-day scrips. Most compliance formats are based on 30 days. Reimbursement rates are established for any currently prescribed drugs and getting additional funds for packaging would take some work.

Q: How can these challenges be overcome? What's the tipping point?
A: This could be an article on its own. I don't expect the pharma manufacturers or pharmacies to change their minds and adopt compliance forms broadly but, at the end of the day, these folks will do what their customers tell them to do. The healthcare community has the power to change the situation simply by asking or demanding change in the delivered form of pharmaceuticals.

I firmly believe that more and more pharmaceutical packaging will take place closer to the consumer and be delivered in the form required by the particular end user-unit dose, bingo card, compliance and such.

* The HCPC did not fund, suggest, influence, participate or otherwise contribute to any of the quoted data or studies.

1. 1984: Modulus Inc. Hormone Replacement Therapy
In a Sept. 1984 study by Walter Leonard, MD, and Dawn Leonard, RN, BSN, the researchers found that 50 women who received their prescriptions in amber vials were only 30 percent compliant while the 50 women using calendarized blister cards were 82 percent compliant.

2. 1991: Unit Dose Packaging and Elderly Patient Compliance
A study published in the New Zealand Medical Journal in 1991 revealed that the 45 elderly patients using compliance-prompting calendar-packs exhibited an 86.7 percent compliance rate compared to the 39 seniors using amber vials (the control group), who had a 66.7 percent compliance rate at the start of the program. After the patients were discharged, those using calendarized packaging continued to lead in compliance.

3. 1992: A Project to Increase Medication Compliance and Reduce Costs in Domiciliaries
In this study, bulk medications were put up in compliance-prompting formats for assisted-living facilities in Alabama. The conclusion drawn at the end of this study was that "results indicated significant improvements in average compliance" ...while "overall average compliance improved from 85 percent to 95 percent."

5. 1996: "Use of Blister Packaging to Improve Patient Medication Compliance in the Treatment of Depression"
SmithKline Beecham Inc. studied 150 patients diagnosed with depression among 43 different sites throughout Canada for 12 weeks. The control group received their prescription in amber vials. The research group was provided with compliance-prompting blisters. Prior to the distribution of the differing packaging, the baseline Beck Depression Inventory (BDI) index for both groups was 27.5. At 24 weeks, the Mean BDI for control group measured 13.1, while the mean BDI for the research group was 11.0.

6. 2008: "Impact of Innovative Packaging on Adherence and Treatment Outcome in Elderly Patients with Hypertension"
Published in the Jan/Feb 2008 issue of Journal of the American Pharmacists Assn., a study conducted by Ohio State University compared compliance rates of the anti-hypertensive drug Prinivil administered to 88 patients 65+ years of age. The study group, 48 participants, received Prinivil in blister packs with compliance-prompting features. The other 40, the control group, received Prinivil in traditional pharmacy vials. Over the next 12 months, the percent of on-time refills of the control group was only 66.1 percent, while the study group's percent of on-time refills was 80.4 percent. Dramatic improvements in diastolic and systolic blood pressure were also measured in the study group. The change in DBP (diastolic) of the control group was 17 percent and SBP (systolic) was 40 percent. For the study group, DBP was 50 percent and SBP was 57 percent.

7. 2011: Adherence Packaging Solutions Drive Substantial Gains in Patient Persistency
Results from an April 2011 independent study, announced by drug packaging provider Catalent Pharma Solutions, showed that unit-dose packaging was associated with a 17-point increase in patient persistency to a drug over 12 months, as compared to conventional 30-count bottle packaging. Persistency rates were defined as the percentage of patients who remained compliant or restarted therapy over the 12-month tracking cycle. The study used data on approximately 200,000 qualified patients from SDI, a provider of anonymous patient-based prescription data for U.S. retail pharmacies.

8. 2011: "A Pharmacoepidemiologic Analysis of the Impact of Calendar Packaging on Adherence to Self-Administered Medications for Long-Term Use"
Published in Clinical Therapeutics in May 2011, this study showed that MWV's new Shellpak calendar packaging improved prescription refill adherence and persistence for daily, self-administered, long-term medication use.

The study group involved 76,321 new users and 249,040 current users, aged 18 to 75 years, who filled prescriptions for oral lisinopril or enalapril (control group) at a mass-merchandise study pharmacy during one year before and after the switch of lisinopril packaging from vials to calendarized blister packaging.