Product recalls in the U.S. decline in 4Q2011—except for food, which skyrockets 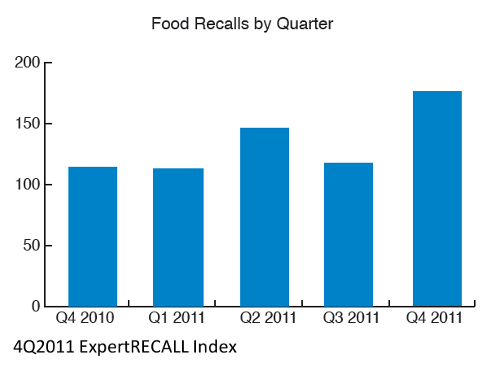 Food recalls across the nation increased 50 percent in the fourth quarter of 2011 and affected more than 80 percent more units compared with the previous three-month period, according to the quarterly ExpertRECALL Index released on Feb 14, 2012. Conversely, the ExpertRECALL Index found that consumer product, pharmaceutical and medical device recalls decreased compared with previous quarters.

"Despite the drop in several other categories, the sharp increase in food product recalls is cause for concern," says  Mike Rozembajgier, vp of recalls at Stericycle ExpertRECALL. "Food recalls are challenging because they affect all consumers. Ensuring consumer safety during food recalls is complicated further when food is repackaged for storage or put in re-sealable containers, eliminating any chance of identifying the food in our homes as having been recalled."

"Another issue is that with so many recalls being initiated, consumers suffering from ‘recall fatigue' may pay less attention to recall announcements than they should," adds Rozembajgier. "In this current environment, manufacturers and retailers must take extra care to ensure that consumers are receiving the right messages about recalls and that they are encouraged to respond appropriately."

"While the number of pharmaceutical recalls dropped during the fourth quarter, this trend can be deceiving. In fact, the decrease in documented recall events are a stark contrast to the surge in the number of units affected," says  Rozembajgier. "This should worry manufacturers and retailers responsible for getting potentially dangerous products off the shelves, and serve as a good example of just how complicated a recall can be, and why effective recall management is critical to public health and safety."

According to FDA Enforcement reports, medical device recalls decreased by more than 60 percent in the fourth quarter, affecting 57 percent fewer units compared with the previous quarter.