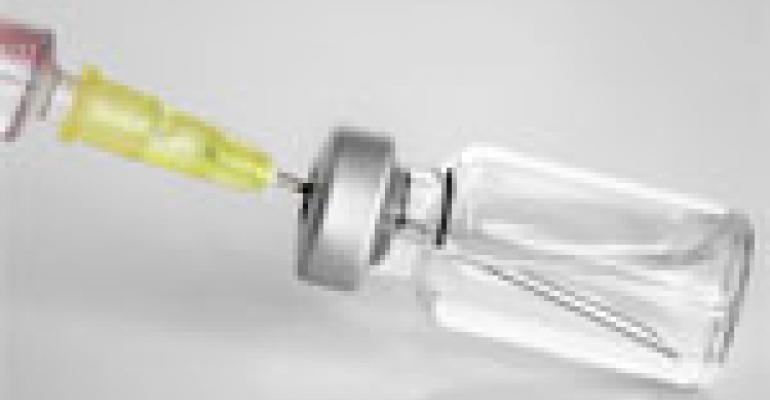 As if Merck does not have enough problems with vaccine production, the drugmaker apparently distributed charred bits of plastic shrink wrap in vials of various vaccines - including Gardasil for preventing HPV infection, Varivax for chicken pox, Pneumovax for pneumococcal disease, Zostavax for shingles and MMR II for measles, mumps and rubella, according to blog in Pharmalot.

In 2008, the FDA issued a warning letter about manufacturing problems at Merck's West Point, Pa., plant (read here). Since then, FDA inspection reports have cited more problems: the presence of metal particles in certain products, cracks in vaccine vials and delays in Merck's reporting adverse event from products made at the plant to the FDA, Dow Jones writes.

The drugmaker maintains most problems have been resolved, but there were no subsequent health problems and the FDA has not issued another warning letter. Dow Jones, by the way, obtained the inspection reports, known as Form 483s, from the FDA under the Freedom of Information Act. "We do have a complex operation," James Robinson, vp of vaccines product and technical operations, tells Dow Jones. "What we are seeing is that the severity and criticality of observations (by the FDA) are declining. What we've seen in the last few inspections tells us we're on the right track."

The problems are crucial to Merck, which is struggling to replenish its pharma product portfolio and jumpstart the vaccine business. Through the first half of the year, vaccine sales accounted for nearly 7 percent of $23.7 billion in revenue (look here). But vaccine production has been troubled for some time.

Over the past couple of years, Merck has struggled to maintain supplies of Vaqta for hepatitis A, ProQuad for MMR, Zostavax for shingles and Recombivax for hepatitis B. And a year ago, Merck was finally able to restore production of all pediatric vaccines for the first time since 2007.

But how did pieces of protective shrink wrap find their way into incoming glass vials? The shrink wrap was not removed during washing and was subsequently charred during a heat-based sterilization process, according to an FDA inspection report in April, Dow Jones writes, adding that some vials made their to customers.

Since November 2009, Merck has submitted to the FDA at least 12 reports of charred shrink wrap found in vaccines, according to the FDA report. Eight arose from consumer complaints, and four stemmed from internal sample testing. Merck responded by switching from shrink-wrap to plastic or cardboard trays for incoming vials for a majority of its products, Robinson tells Dow Jones.

In May, Merck sent a letter to doctors advising them to look for brown particles in its vaccines as well as in vials of Antivenin, a treatment for black-widow spider bites. The drugmaker said small pieces of the shrink wrap, which it called an "inert carbon material," can stick to the inside of product vials and turn brown during the sterilization process. Merck said the particles could lead to injection-site reactions, but should not affect sterility or potency. The drugmaker insists the particles were observed in very rare cases - less than one in six million vials overall.

In August 2010, an FDA inspector accused Merck of not reporting to the agency certain adverse events associated with patient use of its drugs within the required 15 calendar days (here is the report). Robinson said Merck is working to improve its on-time reporting of adverse events, and that it currently exceeds the industry average. Some adverse events are reported late because they take longer to investigate

In February 2009, an inspector found metal particles in certain products, as well as cracked vials. The report said Merck should have done more to investigate and address the causes of these problems). Also, Merck had received complaints from doctors regarding bubbling and foaming in vials of certain vaccines. Robinson tells Dow Jones these problems have been resolved.