While the majority of global consumers still perceive store brands to be the same as or better than national brands, a one year trend analysis indicates that their positive perceptions toward store brands may be starting to decline slightly. This is the latest finding from a study conducted by Ipsos Marketing, Consumer Goods.

Consumers from around the world were asked to compare store brands to national brands on a host of attributes. On key dimensions, including providing good value for the money, meeting their needs, offering convenience, being good for their families, and offering products their family requests, over 80 percent of global consumers indicated that store brands are the same as or better than national brands.

However, compared to the same study conducted a year prior, store brand ratings declined somewhat, most notably in the areas of being environmentally-friendly, high-quality, trustworthy, unique and innovative. Taste, efficacy of household products and packaging appeal slipped as well.

Consumers' perceptions of store brands in nearly all countries surveyed showed a decline compared to the year before, with Mexico and Argentina being notable exceptions to the trend.

"Our data indicates that store brands still pose a strong challenge to national brands, but perhaps consumers are becoming a little bit more discerning about the benefits delivered by national brands," says Gill Aitchison, president, Ipsos Marketing, Global Shopper & Retail Research. "We see that store brands, which initially distinguished themselves as being a low-cost alternative and evolved to offering what many consumers perceive as products comparable to national brands, are showing signs of vulnerability." 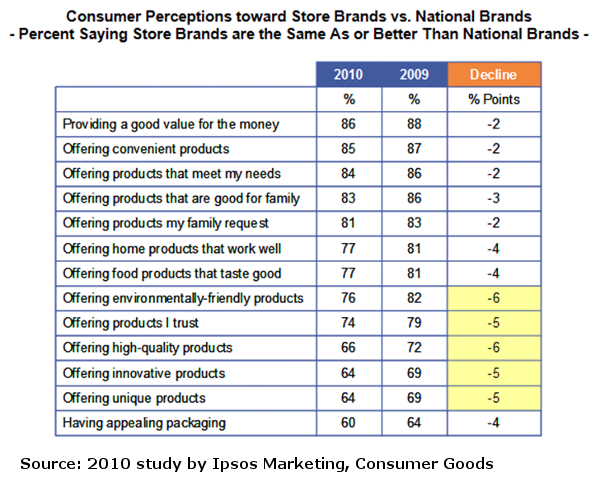 The attitudes toward store brands align with a decline in private label unit share in the U.S. According to the Times and Trends report released by the SymphonyIRI Group in May 2011, "...dollar share growth [among private label in the U.S.] is slowing, and unit share has taken a negative turn." This slowdown occurred during the time period August, 2010 through May 2011. The Ipsos survey was conducted in the midst of this slowdown in December of 2010.

Aitchison concludes, "National brands must be cautious when they see changes in attitudes and behavior toward store brands. These changes stem in part from shifts in the economy and the economy is still very volatile. However, the strategies that many manufacturers implemented for their national brands seem to have led to some success against store brands. National brands should continue to focus on the benefits where they are most differentiated from store brands, namely packaging, innovation and uniqueness—which, in turn, will help drive trust and quality perceptions."

These are the findings from a study conducted by Ipsos Marketing, Consumer Goods via the Ipsos Global @dvisor International Omnibus, an online survey of citizens around the world. A total of 17,146 adults were interviewed between December 10th and December 20th, 2010. Their answers to the same question were compared to those of 19,555 adults interviewed between November 4th, 2009 and January 13th, 2010 in the same countries. The countries included Argentina, Australia, Belgium, Brazil, Canada, China, France, Great Britain, Germany, Hungary, India, Italy, Japan, Mexico, Poland, Russia, South Korea, Spain, Sweden, Turkey and the United States of America.
Complimentary access to the data in this report for each of the 21 countries is available upon request from Ipsos Marketing, Consumer Goods.