In today's European flexible-packaging scene, how many converters have installed six new presses over the past six years? That's the boast of Polish company Grupa Kety SA. Situated on two sites in the south of Poland (near Kraków) and quoted on the Polish stock exchange, the company has changed dramatically since the immediate Post-Communist era. And, despite continuing investment by global flex-pack makers launching Polish-based manufacturing, it now claims to be the leader in its home market and is seeking to increase its already extensive exports by looking to the west of Europe. 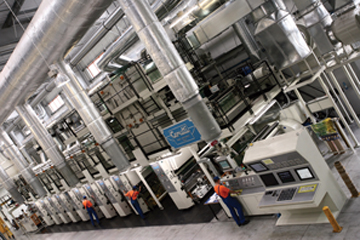 Grupa Kety has installed six new presses over the last six years to the tune of $55 million, including four new rotogravure and two flexographic presses.

“We're definitely the leader in flexible packaging in Poland with a 25-percent share,” claims Mariusz Biesik, commercial director of the Flexible Packaging Segment. “And I'm pleased to say we have taken share away from the multinational converters.” The converter says it has the capacity to manufacture 20,000 metric tons/yr.

How has this been achieved? “The scope of our clients has increase,” he explains. “When overseas competition moved in, we prioritized and focused much more. And we started to look at widening our exports and adding value to our production. We do focus on the multinationals, which now account for more than fifty percent of total home sales. Our clients include such well-known names as Nestlé, Kraft Foods, Dr Oetker and Unilever.”

But perhaps where Kety differs the most from global converters manufacturing in Poland is the attention it pays to domestic customers. “Half of our home market is with these smaller companies,” Biesik adds. “They gain from our work with the multinationals. By developing and learning new specifications and technology, we can then apply solutions for the regional leaders. Almost eighty percent of our production goes to the food market (food concentrates, especially) with the rest mainly to the pharma and chemical fields.”

Exports account for about a third of production. “Eight or nine years ago, only aluminium foil was exported,” recalls Wojciech Kosowski, export manager. “Today, export turnover is ten times higher, and the products are becoming more and more converted and of higher value.” He adds: “Most go to places such as the Czech Republic, Slovakia, Hungary, Ukraine, Russia and the Baltic states, but we also now have customers in Scandinavia, Germany, France and Italy. We have agents in Western European countries. And quality and service are a given in both Eastern and Western countries.”

The company produces all its gravure-cylinder requirements from the Kety plant. The armory comprises two galvanizing machines (the latest installed in 2003) and six engravers [three from Max Daetwyler (www.daetwyler.com ), the newest added last year]. Manager of the packaging plant Antoni Niemiec says, proudly, “We produce 1,300 cylinders every month on average.”

Following a serious fire in January 2006 in the Kety factory, the company refurbished its press armory, renovating two older 10-color presses. It also installed a nine-color Cerutti with Eltromat (www.eltro.com) print-quality inspection with an insetting option. “Even with the fire, our turnover last year was a few percent higher than the previous year, thanks to enormous efforts of the Grupa Kety employees,” Biesik notes. The plant operates on a three-shift system and employs 600 people across the two locations. 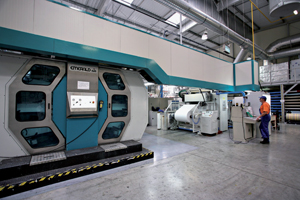 Although it’s a gravure shop, Grupa Kety has not neglected flexo with its two Uteco Converting Emerald CI presses.

“We're very satisfied with the latest Cerutti presses,” says Wojciech Ociepka, plant engineering and development manager for the Flexible Packaging Segment. Like the others, the Model 960/2 uses a trolley system for job changes and is equipped with independent drives. According to Niemiec, a complete changeover takes about an hour. Two new Nordmeccanica (www.nordmeccanica.com) laminators were installed at Kety last year. One of the Duplex systems is a universal solvent/solventless machine, and the other operates only with solventless adhesives. The slitter/rewinder section comprises 15 machines, among them two new automatic models from domestic Polish supplier Jurmet Machinery (www.jurmet.com.pl), and one Uteco Converting (www.uteco.com) system.

As far as substrates used are concerned, aluminum-foil rolling was the company's original entry point into packaging back in the 1950s. It has three mills in Kety, modernized five years ago when computer controls were added. Coiled 0.5-mm-thick aluminium is rolled to a 6-micron thickness. Polyethylene film is sourced from its Alupol plant. All other films (i.e. polyester and oriented polypropylene) are supplied. Some metallized materials are produced at Alupol in its own Galileo Vacuum Systems (www.galileovacuum.com) metallizer.

“Our metallized films often replace aluminum foil for certain less demanding applications. Just because we roll our own aluminum doesn't mean we want to use it at any cost,” Kosowki explains. “We're also in close discussions with ExxonMobil Chemical Films (www.oppfilms.com) as to how to implement their much more sophisticated new metallized films.”

At the turn of the Millennium, the 100-percent Kety-owned Alupol plant was built in a special economic zone in Tychy, Poland, taking advantage of tax breaks geared to encourage investment in the old coal mining area and bringing jobs to the region. It is an impressive investment, with the company very much still in the process of ramping up capacity. Since the fire at Kety, the group is keen to make sure it is able to meet demand without putting all its eggs in one basket. “We have learned a lot from the fire, with a contingency plan, backup facilities and two separate independent production sites,” Biesik says. 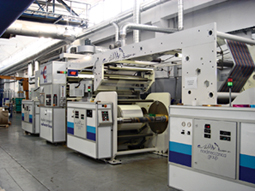 Recent lamination investments include two Nordmeccanica Duplex systems—a universal solvent/solventless machine and one that operates only with solventless adhesives.

Grupa Kety's Alupol facility in Tychy comprises three adjoining buildings. The first was built to house the nonprinting (primarily laminating) sector of the group. Included are two polyethylene-film lines and a Polytype Converting (www.polytype.com) tandem extrusion/coater/laminator. Installed in 2000, it is still believed to be the only equipment in Poland capable of handling four-layer materials in-line. “It is designed for the production of packaging for the soups and spices business,” Biesik adds. Typical constructions are paper/PE/foil/PE. The Alupol 1 plant has four other laminators including a Nordmeccanica Triplex solventless laminator and a Bobst Rotomec Duplex Universal. It is in the Alupol 1 plant that some of the most interesting slitting/rewinding operations take place. There are six systems, including three slitters from Kampf (www.kampfusa.com).

Last year, the group made the decision to invest in laser scoring/cutting equipment, deciding on Micro Laser Technology (www.microlasertech.de) systems from Germany. The first to be delivered is for transverse-web operation. We say how the company had cleverly adapted a Jurmet slitter/rewinder to allow a central section fitted with four laser heads—each operating in a square—to be located between unwind and rewind. During our visit, the equipment was being trialed, scoring the top layer of a triplex film for easy opening.

Since 2004, a huge investment in printing presses has been made at the Alupol 2 site. Last November, another Cerutti 960/2 10-color press was installed, featuring four independent-zone drying chambers to handle water-based applications and paper coatings. The Cerutti features Eltromat control and, depending on material type, speeds range from 650 to 1,100 fpm.

Aupol 2 also houses the company's flexographic-printing department and the Galileo metallizer. The flexo armory comprises two eight-color Uteco Converting Emerald CI presses, and CTP-flexo plates are made in this plant. Between this plant and the new Alupol 3 construction are sited two Babcock Power Environmental (www.babcockpower.com) thermal oxidizers—again a recent investment.

Within the new plant is yet another new 10-color Cerutti 960/2 press with space for one more in the same printing hall. Already in place in an area destined for more slitter/rewinders is a new 53-in.-wide Jurmet system fitted with another MLT longitudinal laser cutter.

While Kety has clearly settled on being a gravure-printing house, Kosowski says hope lies ahead for its flexo operation. “The flexo presses are to develop different buinesses, for example, frozen foods, washing powders, healthcare products and aluminum foil for sweets.”

There's more investment by Grupa Kety on the way, such as another Windmoeller & Hoelscher (www.whcorp.com) blown-film line (94.5-in. wide) at Alupol later thi syear and three more slitter/rewinders. Perhaps most significant is a expansion in the print-cylinder department at Kety where a galvanizing line and Max Daetwyler laser-engraving equipment are likely. Predictions for major increases in profit point to an exceptional future for Grupa Kety.