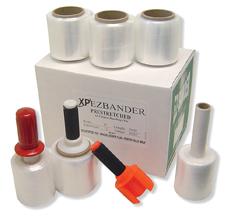 The XP EZ Bander is a new prestretched banding film that joins a line of narrow-width bundling films. Targeting the narrow-width stretch-wrap market, XP EZ Bander is designed to combat volatile prices and low distributor margins, the co. states. The prestretched film promises to give a good look to wrapped products. Stiffer and stronger than conventional films that are oriented and prestretched, the film is said to give greater holding force and eliminate the need to stretch the film during application, the co. reports. The film affords stiffness and is available on rolls with extended-core disposable handles.