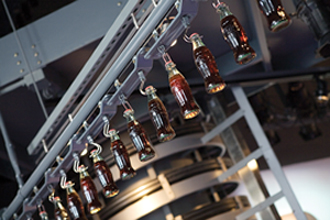 The new World of Coca-Cola showcase in Atlanta is putting the wonders of automation on display for public consumption. At the new tourist facility, which officially opened on May 24, 2007, visitors can see depalletizing and packaging robots, a clean-in-place (CIP) system, machine-vision systems and blending/filling operations in action.

“The new World of Coca-Cola is a physical expression of everything Coca-Cola is,” Coca-Cola chairman and CEO Neville Isdell said at the opening ceremonies for the new center. The building holds three theaters, more than 1,000 Coca-Cola artifacts never seen by the public and Bottle Works, a fully-functioning bottling line.

Visitors get an up-close, behind-the-scenes look at how Coca-Cola is made and packaged. At Bottle Works, guests have the opportunity to wander through the bottling plant via a glass tunnel. A “ghost” image appears on the walls to explain what's happening behind the glass.

The tour starts with the clean-in-place unit that sends a sanitizer and 180-deg-F water to all the equipment in the bottling line to clean the interiors of pipes and machinery when Coke is not being made. Visitors then see where the water is filtered and cleaned with a multibarrier treatment system to ensure its quality. The next step is the syrup tank, which stores up to 1,000 gal of syrup—enough to make approximately 104,000 8-oz bottles of Coke.

Moving through the process, visitors may see a packaging robot unique to Bottle Works that unloads empty bottles and puts them into production to be filled and stacks simulation bottles as they come off the line. A machine-vision system in the bottle inspector then takes a picture of every bottle to examine its interior for defects. Any bottle that does not meet quality standards is rejected, and the rest move on to be rinsed.

The bottle rinser fills bottles with de-ionized, filtered air, which breaks the static charge and removes any particles that may cling to the bottles. A blender, or proportioner, is next on the tour, showing where the syrup and treated water are mixed together in accurately measured ratios. Filtered carbon dioxide is added here as well to create the finished beverage. The bottles move on to a laser coder, which dates and codes the bottles, and then they head to a fill-level inspector and capper. The final stage of the tour is the quality-assurance lab, where randomly selected bottles of Coke are tested for taste, amount of sweetener and CO2 and application of the cap.

Some parts of Bottle Works cannot be found in a typical bottling plant. This bottling line was designed to fill 20 bottles every minute, making it easier for visitors to observe the process, but some bottling plants have lines that are capable of filling more than 2,200 cans a minute. Even at a slow rate of speed, Bottle Works produces more Coke than is needed at the new World of Coca-Cola. At certain times of the day, visitors may see bottles being emptied and a caramel-colored liquid being recirculated as the line is in simulation mode.

GE Fanuc (www.gefanuc.com) provided software and services to support a comprehensive plant-intelligence solution for Bottle Works. The system includes all of the functional elements found in Coca-Cola's most advanced bottling plants globally. 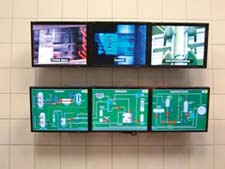 Six LCD displays in a quality lab are part of the plant-intelligence system at Bottle Works.

Behind the scenes, the GE Fanuc professional services team uses a modular production-management solution that provides critical process and quality information to supervisors and technicians responsible for operation of the bottling line in a high-availability environment. “The chief requirement of the system was very high availability, because the plant at the new World of Coca-Cola is open ten hours a day, 363 days a year,” says Dan McGuire, senior project manager for GE Fanuc global professional services. “Built-in iFix redundancy is a key component and advantage.”

A unique feature of the Bottle Works implementation is redundant Proficy HMI/SCADA–iFix systems driving six 20-in. LCD displays located in the quality lab and more than 100 ft from their servers. A typical installation would need six computers and complicated scripting to orchestrate the displays. But by using a standard display adapter from Matrox Electronic Systems (www.matrox.com), CAT5-based transmitter/receivers by Magenta Research (www.magenta-research.com), and simple scripting in iFix, the team dramatically reduced the cost, complexity and ongoing maintenance of the system. Redundancy built into iFix, and common cabling, supports quick failover of the SCADA system and displays, if needed. 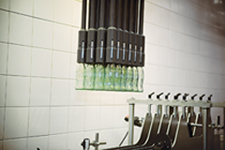 Geneology module tracks and reports all process and filling operations.

Quality lab technicians and operators rely on a unique six-screen process control visualization that can be seen by guests touring Bottle Works. The system monitors and reports data from the shop floor, including information regarding the direct filtration system, which provides clean water used in the formulation of the product, as well as the water for the CIP system. In addition, a Fanuc robot takes the bottles from pallets and placing them on the line. (GE Fanuc is a joint venture between General Electric and Fanuc LTD of Japan.)

GE Fanuc worked closely with Rovisys (www.rovisys.com), an integrator headquartered in Aurora, OH, responsible for development of the Proficy HMI/SCADA–iFix graphics used. Says Joe Maukonen, director of manufacturing IT for Rovisys. “Our job was to determine how best to depict the activities represented by iFix. We made them dynamic and easy to work with.”

To find more about the new World of Coca-Cola, visit www.woccatlanta.com.

This story is courtesy of Control Engineering Magazine.