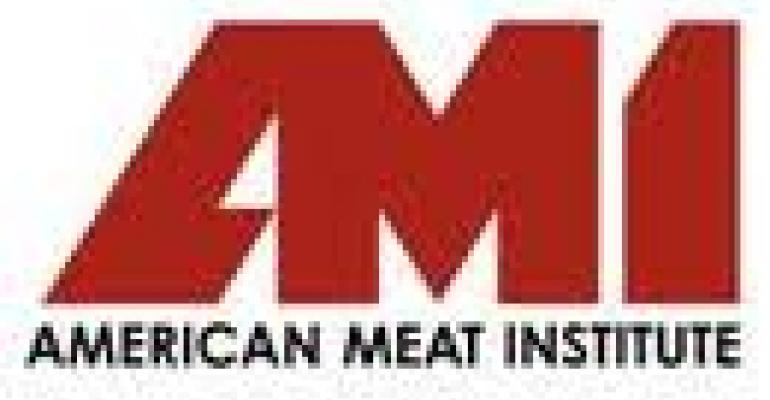 A USDA Agricultural Marketing Service (AMS) March 12 proposed rule on country-of-origin labeling (COOL) for meat and poultry products that claims to bring the U.S. into compliance with its obligations under the World Trade Organization (WTO) is fa

r more burdensome than the original 2009 rule now in effect and should be withdrawn, according to American Meat Institute (AMI) comments filed yesterday. Current COOL rules prompted a complaint to the WTO by Canada and Mexico and a ruling that the U.S. is indeed violating its WTO obligations.

"Usually, the sequel gets bad reviews and that is certainly the case here," AMI Senior Vice President of Regulatory Affairs and General Counsel Mark Dopp said in discussing the comments. "Reading this proposed rule is like watching ‘Godzilla 13', but sadly, it's not fantasy. It's a real, bureaucratic proposal that will give consumers information they aren't truly seeking for a higher price and put companies out of business in the process. It will also irritate trade relations even further."

In its comments, AMI detailed how many member companies will be significantly and adversely affected by the proposal. In 2009, meat and poultry processors and retailers were required to apply country-of-origin labels to packages at an estimated cost of as much as $500 million to the meat sector in the first year alone due to costly segregation of livestock, record-keeping and new packaging.

The 2009 rule simplified an earlier 2003 proposal that would have required labels to detail the countries where various production steps, like birthing, raising and processing, occurred rather than just the nation where the product was finished and packaged. Champions of the 2003 version argued that consumers wanted this type of labeling despite ample research showing it was both low on consumers' priority list of product attributes and that consumers were unwilling to pay more for labeled products. Proponents of the 2003 version also made clear that they sought a rule that would protect the U.S. meat and poultry industry and hinder free meat trade with other nations.

"In effect, the proposal seeks to replicate, in large part, the rule that AMS proposed in 2003," AMI wrote. "This proposal, however, is more problematic than the 2003 version in that, unlike 2003, it would require covered commodities that are eligible to be identified as U.S. origin and also to bear labeling declaring the production steps. In essence, the proposal would force every supplier and every retailer to change its labeling information and systems." Specifically, under the proposal, products now called ‘Product of the U.S.' would be forced to be relabeled as "Born, raised and slaughtered in the U.S.'"

AMI also told USDA/AMS that if the existing mandatory COOL rules are amended according to the proposal, there is a virtual certainty that several meat packing establishments will ultimately close because of the costs they will be forced to incur in order to implement the proposal's requirements. "In effect, the agency is picking winners and losers in the marketplace in order to provide information to consumers that recent research shows they care little about and do not wish to pay for," AMI said. Operations on the northern and southern borders would be impacted most severely because their business are premised on free trade in meat and livestock across international borders, and the new rule would have a particularly burdensome impact on them in terms of segregation and labeling, which suggests that the U.S. government is essentially picking winners and losers in the international marketplace.

Finally, the Institute said this proposal will not satisfy WTO concerns despite USDA's claims to the contrary, noting that the WTO's Appellate Body (AB) ruling read, in part, "...In reaching its finding of detrimental impact, the Panel found that it is the recordkeeping and verification requirements that "necessitate" segregation, and that create an incentive for US producers to process exclusively domestic livestock and a disincentive to process imported livestock. That is, the Panel found that the recordkeeping and verification requirements imposed under the COOL measure lead to the detrimental impact on imported livestock in the US market...."

"The proposal not only does not address this fundamental problem, it requires even more segregation, thereby enhancing the discrimination and detrimental impact on imported livestock, all while causing United States plants and businesses, including livestock producers, to close," AMI wrote.

Just as AMI submitted its comments yesterday, Canadian Agriculture Minister Gerry Ritz completed his visit to Washington, where he met with Agriculture Secretary Tom Vilsack to signal his nation's dissatisfaction with USDA's purported "fix". In a press release about Ritz's visit, Agriculture Canada said, "The proposed changes will not bring the U.S. into compliance with WTO obligations and will further increase the discrimination against exports of cattle and hogs from Canada, increasing damages to the Canadian Industry."