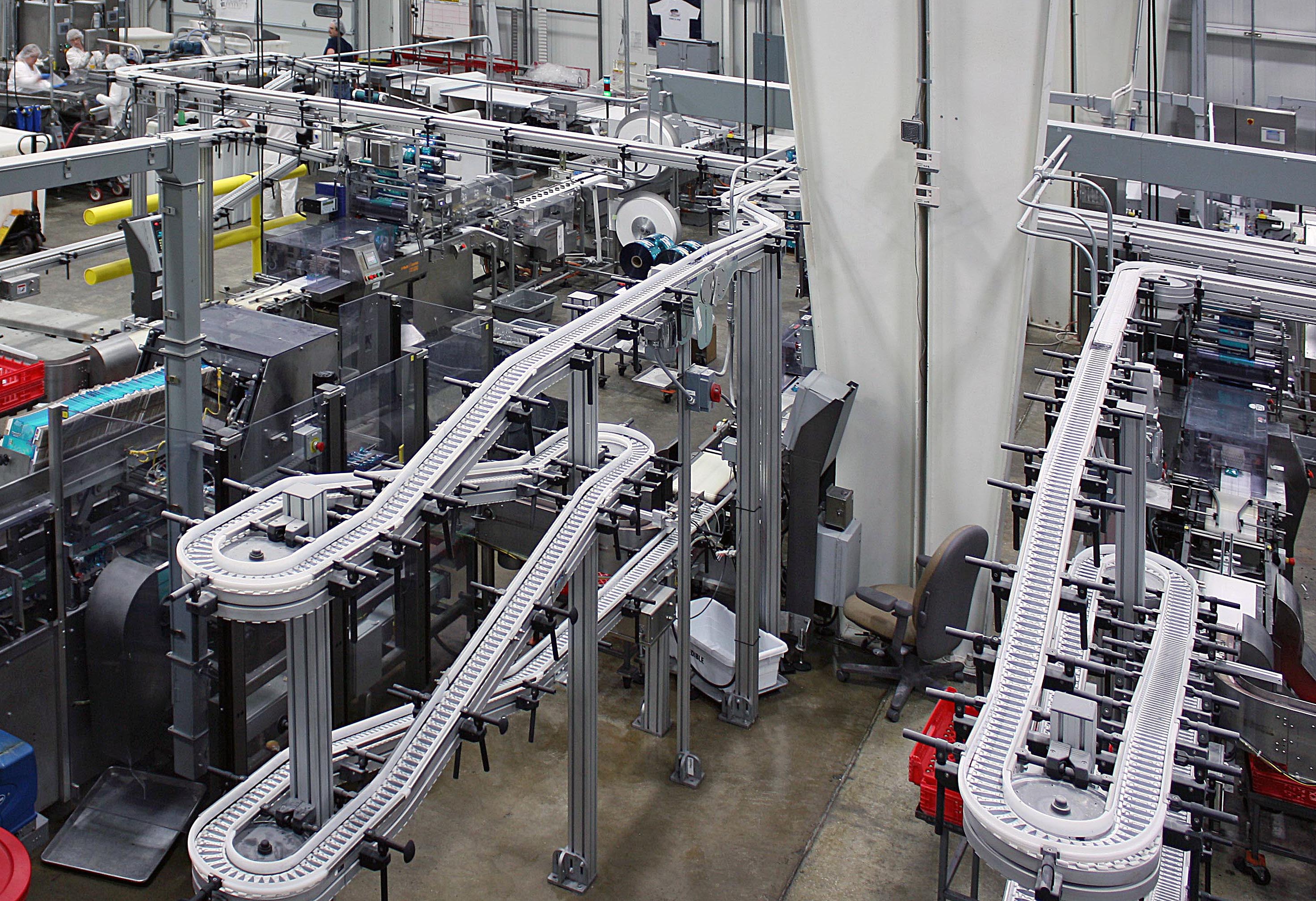 However, Oak State found it increasingly challenging to stay ahead of food product marketers' demand for changes and adjustments to packaging styles in response to shifting consumer demands.

Oak State certainly had the physical capabilities to meet any demand. Its plant featured advanced packaging equipment, including robotics, wrapping machines and other automation for cartoning and case packing. The challenge came when Oak State's customers switched from one style to another, for example, increasing demand for convenience-style packaging, or a shift from 2- or 3-pack cartons to open-pack trays.

It was difficult to add or convert production lines because the space for product conveying was quite limited. Production line changeovers were also challenging because of space limitations (caused mainly by the fact that, during busy times, the available space fills quickly with packing equipment), tight clearances and small areas in which to work.

Match limitations and requirements
Oak State needed to increase flexibility to maintain profitable production levels, but it didn't want to walk away from its investment in existing conveyor technology. And while Oak State also wanted to keep its conveyor line footprint small to allow possible future expansion, it didn't want to expand the physical plant area just to accommodate more packing equipment.

Oak State was pleased with every aspect of that system, including NCC's traffic control concepts that prevented collisions between product, which cause m 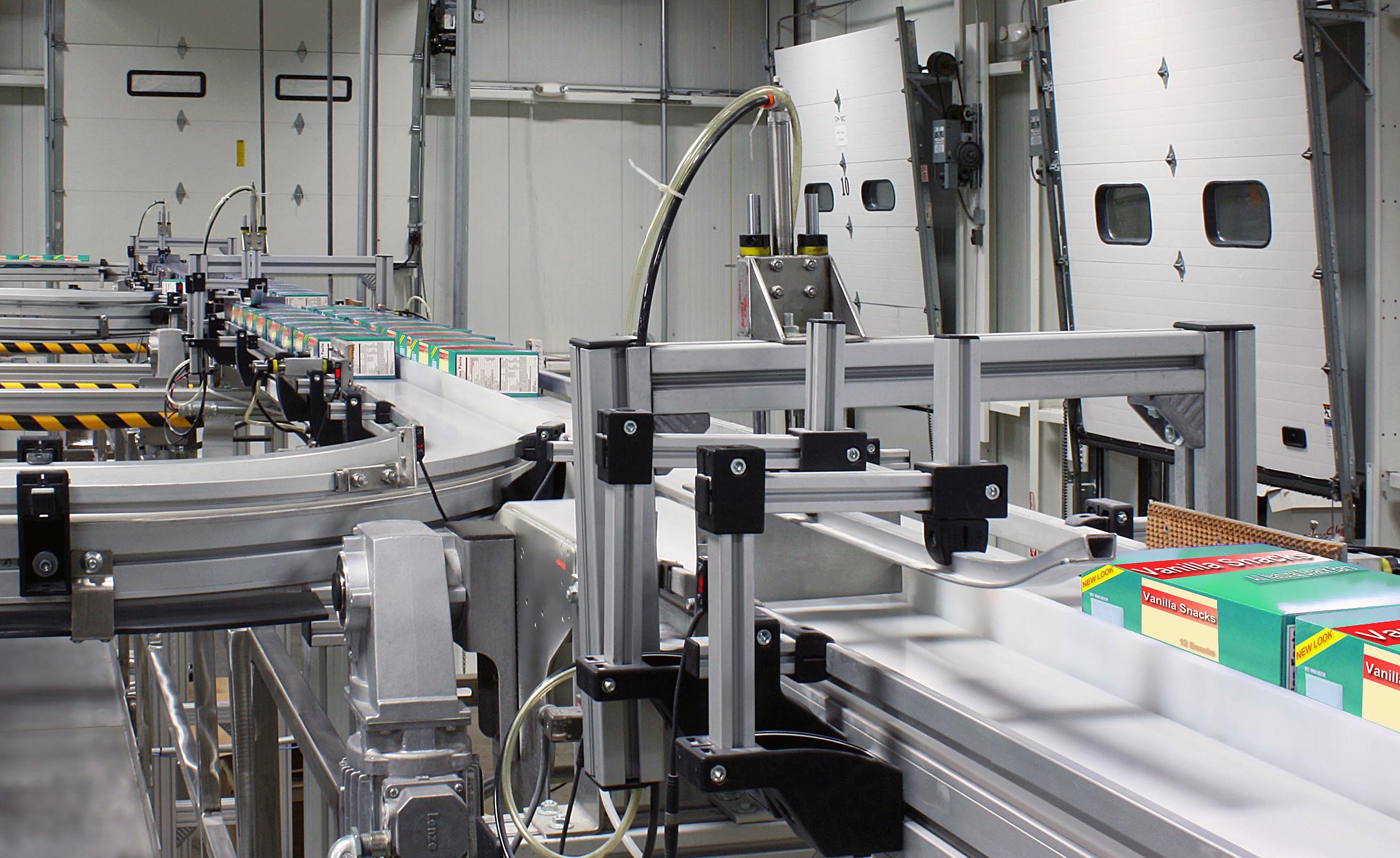 arring and damage, and details like brush cleaners to keep icing off conveyor chains. With this success in mind, Oak State turned to NCC with a more ambitious goal: modular improvements to the area running grocery or convenience orders.

Oak State's goal was to feature several production legs that could be switched quickly from one style to another, and easily expanded if necessary.

There were also deadline considerations. "We needed a fabricator that offered rapid delivery and the capability to perform prefabrication prior to the installation," says Diana Craigmile, senior project engineer at Oak State. "NCC had already proven its ability to meet tight deadlines. Because of our customer demands, we needed to get the new production area up and running within 12 weeks."

Finally, from an integration point of view, Oak State needed a simple and easy-to-run system that minimized potential logistical headaches like elevators, 90-degree turns, interfaces between short conveyors and intermingling of cartons on an overhead line.

The overhead line avoids employee crossovers during packing and assembly, which invite collisions and safety hazards, and maximizes access to the work area for maintenance and for materials delivery. The overhead layout allows Oak State to eliminate all crossovers and create full-floor access for everyone.

NCC integrators blended modular VarioFlow 90 and S160 conveyors to create a full-featured system for efficient transport of food products in wrapped sleeves, plastic trays and cartons, all within existing space limits. To ensure a well-coordinated system in a relatively small space, designers included both inclining and declining conveyors, alpine conveyors and overhead transport, thus ensuring that packing and other machines would work efficiently alongside or underneath the conveyors.

One of the most critical needs for Oak State was to smoothly merge the flow of cartons from up to four lines onto a single descending VarioFlow alpine conveyor, while avoiding time-consuming and costly "traffic jams" that could also damage packages.

The fact that all this had to be done overhead, along a catwalk, added to the challenge. Oak State and NCC responded to the challenge by devising a "batch" or "slug" system in which cartons were released to the main conveyor in groups of 10 at a time. Batching the cartons together in small groups made it easy to mesh conveyor speeds and time the process so that one slug of cartons at a time could be fed onto the descending conveyor and sent to the case packing and palletizing area.

Another key to success was the VarioFlow assisted curve concept. Fiting a large amount of conveyor footage into a small space necessitated sharp 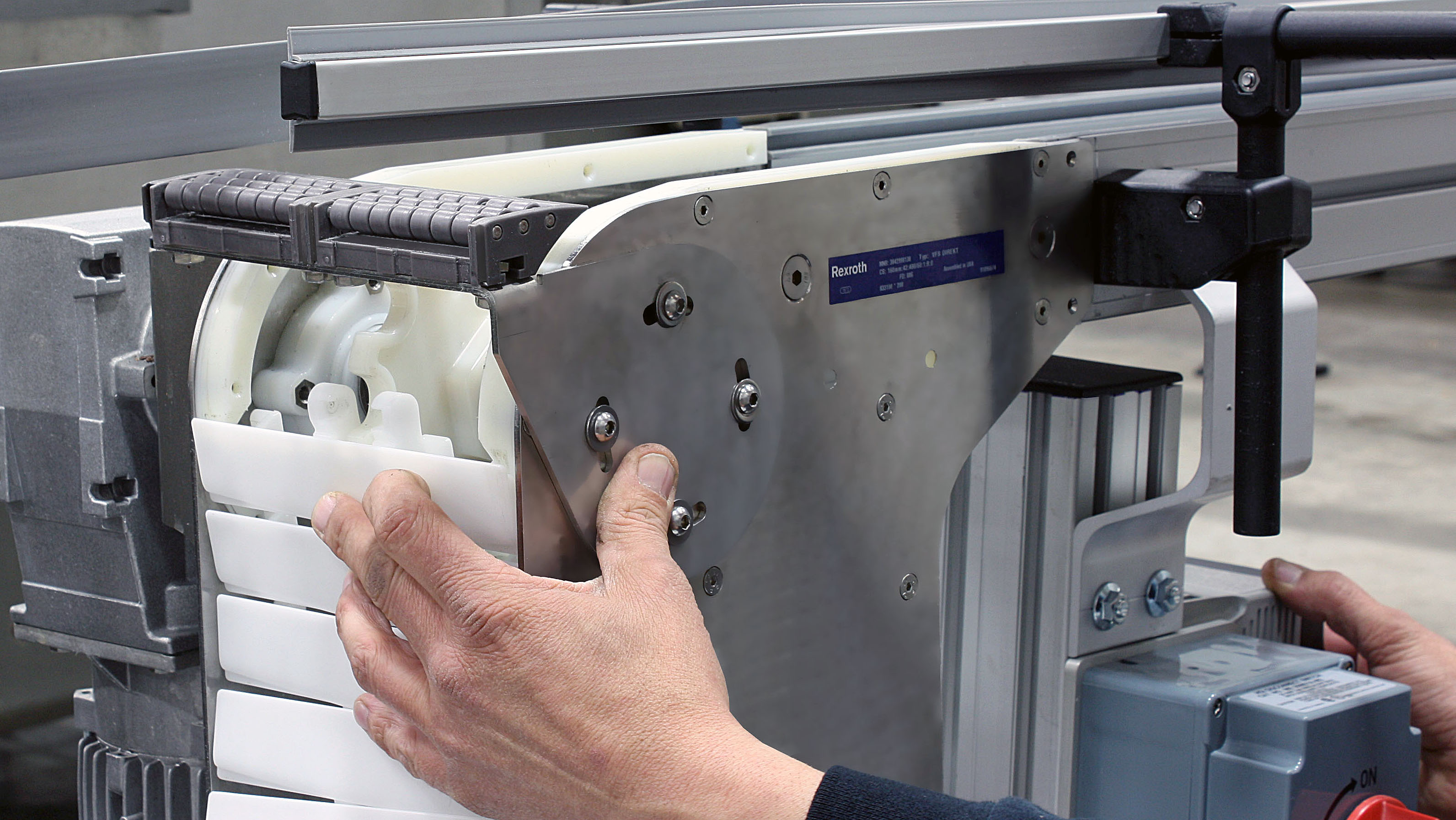 curves, which can mean excessive wear, friction and heat on conveyor chains, shortening their life. VarioFlow curves employ small wheels that interact with the chain, keeping it moving and safely away from contacting the inner sides of the extrusion in which the chain runs. The resulting decrease in friction both protects the chain and reduces energy usage by making it easier to drive packages through curves.

A key element of the project was to use existing conveyors wherever possible to minimize costs. By modifying and re-using existing equipment, Oak State saved an estimated $100,000 versus purchasing all-new components.
"Oak State knew that we could integrate existing equipment into the new system as well as provide the latest modular components," says Kevin Mauger, president, NCC Automated Systems. "Re-use of existing conveyors wherever possible also helped us complete the installation quickly and on-schedule."

Overall, the line upgrade enabled Oak State to increase capacity by 20 percent, partly through the addition of an additional wrapper leg to the line.

That schedule was very tight. Counting lead time for pre-fabrication and delivery, Oak State needed the switchover to be completed quickly, including only four weeks for actual installation within the plant. More importantly, production interruptions had to be kept to a minimum while the operation proceeded.

NCC responded with an innovative parallel approach, in which new conveyors were built right next to existing, running ones. Individual lengths of conveyor were then switched over one at a time, minimizing interruptions and allowing the tight deadline to be met. Within four weeks, Oak State was more ready than ever before to take on future challenges and increased orders.

Ready for the future
The benefits of the new VarioFlow-based conveyor system goes beyond expanded capacity and higher throughput. Damage to packages is reduced by streamlined flow and the batch-based merging approach. Smoother conveyor operation means reduced energy use. Maintenance needs are lower, due to longer chain life and the fact that modular construction makes it easier to reach key components.

Cleaning belts and wiping down conveyor frames, for example, is much more convenient because maintenance staff can easily remove belts and uncouple segments of conveyor. "Reduced downtime and maintenance time are two of the biggest differences we've seen since the new conveyors were installed," says Craigmile. "It's especially important, because space is limited and, in the past, it could be difficult to get to the components that we needed to clean or service." Oak State estimates an improvement in throughput of about 20 percent.

Most importantly, the flexibility of the new conveyor lines means that Oak State is poised to respond almost immediately to changes in customer ordering patterns and preferences. That includes potential expansion to meet increased demand and increases in production line speed to meet tighter deadlines. Reconfiguring a line now only takes one or two hours, as opposed to days. Oak State is generally provided with production forecasts, but changes on short notice happen all the time, so the ability to perform rapid adjustments is essential.

The new system is likely to bring continued benefits to Oak State, in terms of flexibility and expandability, for as long as consumers continue to enjoy snack foods and desserts.