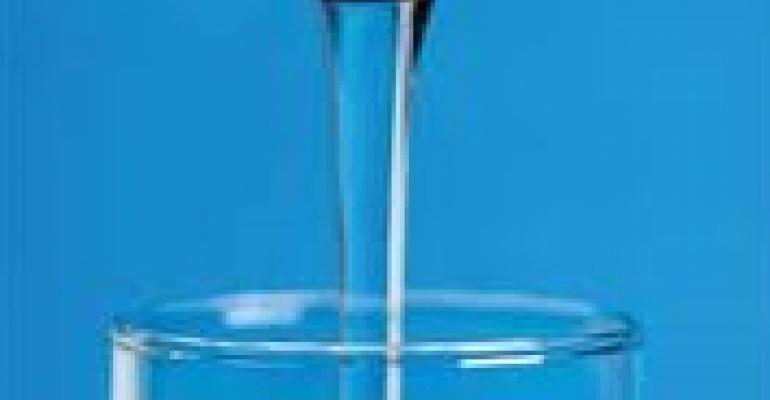 (costing 6 cents an ounce) or, instead, sip from the drinking fountain (free),
you will be taking part in another debate that touches on the fate of humankind.

Because the next time you grab a bottle from a case in the fridge (costing a
penny an ounce) or fill a glass from the tap (a penny for 5 gallons) you will be
choosing between dollars and cents, essential hydration and environmental waste,
and personal health and public health.

Let your wallet be your first guide, opponents of bottled water say.

"The bottled-water industry has really built a market on casting doubt on the
quality of tap water," said Kristin Urquiza, director of Think Outside the
Bottle, a campaign devised by Corporate Accountability International, a
Boston-based group. "But more and more people are saying, 'Wait a minute,
bottled water is costing thousands of times more than tap water.' "

"Sometimes it's a moment-by-moment choice, where you are in front of the
7-Eleven cooler and you grab a bottle of water because that's all you really
want instead of a carbonated beverage," said Tom Luria, spokesman for the
International Bottled Water Association. "That should be applauded by everyone,
just because of obesity and heart disease and other problems that come with
excessive calories."

As sales of bottled water took off during the past decade, so did a backlash
from environmental and consumer groups that encourage use of reusable bottles.

When sales dropped in 2008 and 2009, the industry blamed the recession, while
opponents claimed progress in turning the public against bottled water.

Today, sales are back on track, according to Luria. But not entirely, said
Urquiza, pointing to a continued lag last year in revenue for Nestle Waters
North America Inc., the largest U.S. bottler of water and the owner of several
brands, including Florida-based Zephyrhills.

Figures published by the Beverage Marketing Corp., a private research company,
show that the industry rebounded last year to sell 8.8 billion gallons, or
nearly as much as it sold in 2007, the peak year for sales.

That's not the sole result of any economic recovery; the personal-sized,
disposable bottle of water also got significantly cheaper.

"In the single-serve market -- the 1.5-liter-size containers and smaller -- that
segment had very aggressive pricing in 2010, and that's one of the factors that
helped drive the growth," said Gary Hemphill, Beverage Marketing's managing
director.

According to his research on gallons sold, sports-and-energy drinks and
ready-to-drink tea and coffee had the greatest gains last year, followed by
bottled water, which had an overall growth of 3.5 percent. Soda, still the
leading beverage product, continued a multiyear decline.

"The general movement of the consumer is toward healthier refreshments,"
Hemphill said. "In that spectrum, we think bottled water is positioned well for
growth."

Industry supporters and detractors spar regularly over the effects, good and
bad, of bottling water.

Industry supporters note that bottlers have switched to containers made with a
third less plastic, reducing them from 18.9 grams -- or the weight of about four
nickels -- to 12.7 grams.

Industry detractors say the rate of recycling bottles, according to government
figures, is a dismal 25 percent. Even Zephyrhills packaging notes "fewer than
25% of all plastic bottles actually are recycled. We need your help."

And the quest by bottled-water companies to tap new sources continues to stir
controversy.

In many respects, the choice of whether to drink bottled water touches on the
kinds of trade-offs Americans routinely face in their everyday lives.

A car with a big engine may be fun to drive but costs more at the pump and
contributes to a dependency on foreign oil. Setting the air conditioner at 70
degrees may feel comfortable but results in higher utility bills and in power
plants discharging more greenhouse gas.

According to Nestle spokeswoman Jane Lazgin, opting for bottled water is not
about saying no to tap water; it's about saying yes to a healthier alternative
to soft drinks.

"I don't want to knock tap water," Luria said. "Sometimes bottled water is
preferable. It tastes better, it looks better, it's cost-effective if purchased
at a big-box store."

But Emily Wurth, director of Food & Water Watch's water program, said
bottled-water marketing implies that tap water is unpleasant and unsafe when, by
contrast, not all bottled water is as clean and well-regulated as tap water.

"People who probably can't afford bottled water chose it anyway because the
marketing has made them fear for the safety of their tap water," Wurth said.

"We would be reverting to what a developing country is like, where those who are
affluent enough can purchase safe water," Wurth said.