Healthy Foods Not Necessarily More Expensive Than Less Healthy Ones

bles appear more expensive than less healthy foods when the price is measured by calories rather than by weight or by amount in an average serving. The price measure has a large effect on which foods are determined more expensive.

My ERS colleague Elizabeth Frazao and I wanted to look at other price measures as a beginning point in answering the question of whether price is a hurdle to making wiser food choices. We calculated price in three ways: price per calorie, price per edible weight, and price per average amount eaten. Price per edible weight is the price of the food after it is cooked, and the seeds, peels, skins, shells, and bones have been removed. Price per average amount is the price of the average amount consumed by adults who reported their food consumption in a national survey.

We assigned each of over 4,000 foods in the survey to one of the five USDA food groups (grains, dairy, fruit, vegetables, or protein foods); to mixed dishes (such as spaghetti and tomato sauce); or to the "less healthy" food category. To make it into a healthy food group 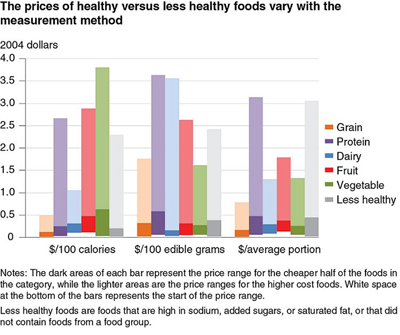 , a food had to contain specific minimums of at least one of the USDA food groups and had to fall below a maximum amount of saturated fat, added sugars, and sodium. Less healthy foods were defined as those high in sodium, added sugars, or saturated fats, or containing little to no amount of USDA's food groups. Less healthy foods included items such as many canned and dry soups, fruit-flavored yogurt, and sodas.

On the plate are amounts of various foods providing about 100 calories each. A price comparison based on calories would not tell the consumer how much it would cost to purchase the amount of these foods typically consumed.

We found that the price measure used has a large effect on which foods are more expensive. If we use price per calorie, fruits and vegetables tend to be more expensive than less healthy foods. In contrast, if we use price per edible weight or per average amount eaten, then grains, vegetables, fruits, and dairy foods are less expensive than most protein foods and less healthy foods.

We also estimated the cost of meeting individual food group recommendations as detailed on the ChooseMyPlate.gov website. The vegetable recommendation is the most expensive to meet - and it's because of the amount recommended. Check out more of the findings in our report, Are Healthy Foods Really More Expensive? It Depends on How You Measure the Price.