A new bulk glass system on one of its highest-speed packaging lines is helping MillerCoors reduce costs and waste at its giant Milwaukee, WI, brewery. The facility, which has eight packaging lines, occupies 90 acres and produces 10 million barrels (310 million gal) of beer every year. The plant produces Miller Genuine Draft, Miller Lite, Coors, Miller 64 and a variety of craft and specialty beers such a 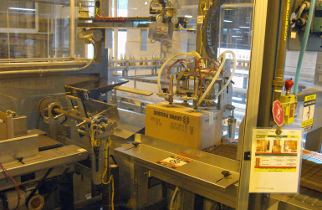 In this process, rather than bottles being inside of reshippers, the glass is shipped to MillerCoors stacked in bulk on a pallet with each layer separated by a slip sheet. A depalletizer pushes each layer of bottles onto a take-away conveyor. This eliminates manual handling of cases with all of the possibilities of personal injury, and there are no problems with damaged reshippers and case partitions. The other advantage that bulk glass has over the conventional method of receiving bottles in reshippers is cost savings in labor and logistics.

The line in Milwaukee, which runs 1,300 bottles per min, previously required multiple case unloaders and case packers, plus hundreds of feet of conveyor to convey the cases from the unloaders to the packers, not to mention all of the interlocks and transfers that can cause handling problems and the workers associated with this operation. MillerCoors replaced the case unloaders and packers, as well as the case conveyors, with a new packer cell that includes two new machines-a carton packer and a tray loader.

The other equipment on the line was not changed.

MillerCoors reliability engineer Chris Emanuel says, "There are enormous savings in receiving glass in bulk both for MillerCoors and for our glass supplier. Putting glass into cases in a box shop is extremely labor intensive compared to palletizing it automatically. And it's just as costly for us to handle cases here in our plant." 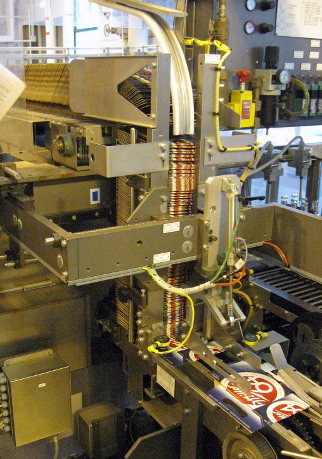 house space and record keeping, both at MillerCoors and in the glass supplier's warehouse, because each SKU requires its own labeled shippers and storage.

The line running bulk glass at MillerCoors is dedicated to 12-oz glass bottles of Miller Genuine Draft, Miller Lite and Miller 64. Bottles are conveyed from the labeler to the Autoflex AF15HS bottle packaging system from Graphic Packaging Intl. During PD's visit, the machine was loading bottles, which were supplied by O-I, into 6-pack basket carriers supplied by Graphic Packaging. Should MillerCoors desire, the machine can pack a wide range of glass and PET bottle sizes and shapes in various pack formats and basket styles.

The bottles are separated into two rows as they enter the machine and maintain the two-row configuration as they travel through the unit.

As part of the Autoflex operation, MillerCoors has installed an automatic decasing option for the 6-pack carrier baskets, also supplied by Graphic Packaging. Open-top cases containing 150 flat carrier baskets are conveyed to the decasing unit, where the case is inverted, vacuum arms lift off the case and the baskets drop onto a conveyor that delivers them to the Autoflex magazine. The decasing system provides approximately 10 minutes of accumulation and eliminates manual inversion and unloading of the carrier baskets. 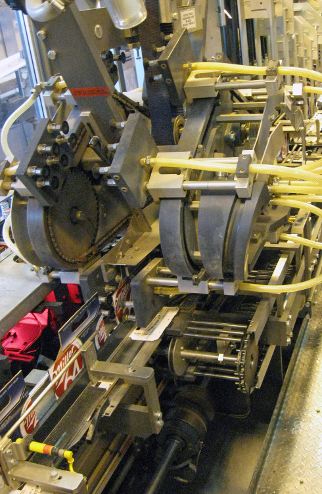 and the bottles on the other. The baskets discharge from the magazine into a vertical chute and are dispensed one at a time (similar to dealing cards from the bottom of a deck) onto the carton set-up conveyor. This conveyor transports them through rails that plow the main portion of the carrier vertical, while still keeping the bottom flaps flat on the conveyor.

Place carrier baskets automatically
The carriers pass through a servo-driven operation where vacuum cups open the basket, while the bottom flaps are still held flat. The opened baskets are transferred to vertical arms on a continuous carousel that raises the individual carriers high enough to fit over the tops of the bottles as they travel around the end of the machine to the side with the bottles.

On the bottle side of the Autoflex, starwheels meter the bottles into the machine to achieve the proper pack configuration-in this case three bottles in each of the two lanes. This can be changed if MillerCoors wants a different configuration.

The carousel lowers the open-bottom carriers, held in the vertical arms, down over the group of bottles being conveyed below. Once the basket has been placed over the bottles, the arm rises and the carousel travels around to the other side of the machine to pick up another basket.

As the bottles continue through the machine, the bottom flaps of the ba 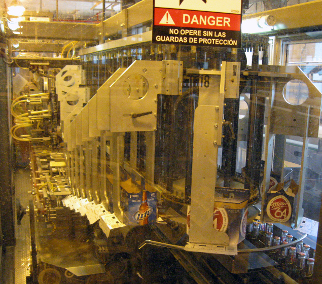 skets are plowed across the bottoms of the bottles and interlocking carton tabs on one flap are pushed into slots on the opposite flap. The system does not use glue.

The locks on the bottom of the carrier basket have a dark, printed registration mark that will only show if the base flaps are not engaged properly. The carriers pass over a vision system from Cognex Machine Vision Systems that looks for that mark.

If the lock-detection system sees the mark indicating an improperly locked basket, that basket will be automatically diverted onto a rework conveyor by the reject system incorporated into the Autoflex's integrated two-lane divider system.

As the loaded basket carriers leave the Autoflex machine, they travel through a lane divider/turner that orients them for the Kisters Innopac WP wraparound packer from KHS USA Inc., which is the next machine in line. During PD's visit, the packer was running corrugated wraparound cases containing four 6-pack basket carriers in a two-lane configuration with bottles arranged four across and six deep.

The machine can also run in 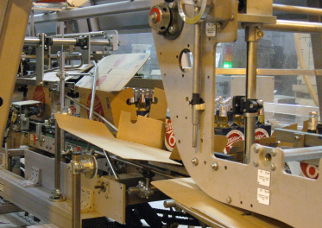 dividual loose bottles. If MillerCoors selects that option, the bottles from the packaging line bypass the Autoflex machine and enter the Kisters wraparound packer via a parallel transfer infeed. Partitions are inserted on a high-speed continuous basis.

During PD's visit, the machine was running complete wraparound cases in which the integral top was folded over and glued shut. It can also run trays. In either case, flat blanks are delivered into the machine from a high-capacity horizontal blank magazine and are conveyed up to the bottle-entry level.

Carrier baskets are separated into the proper grouping as they enter the machine-in this case four carriers. A flight bar attached to continuous overhead chains descends behind each grouping and pushes it onto the blank that has been delivered from below.

Pins attached to continuous chains that run beneath the conveyor bed then rise and push the cases through the forming operations. As the cases travel through the machine, stationary plows fold the side flaps, including the top which is part of one side flap, and a Nordson Corp. unit applies hot melt glue.

Conveyors for the new operations were provided by Sidel Inc., who also provided systems integration for the new equipment.

MillerCoors spends $65 million on new operations at its Canadian breweries 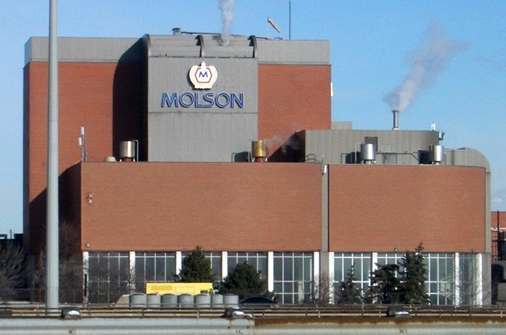 Coors operation in Canada) invested a combined $65 million on new beer packaging lines in its Canadian breweries. This included $52 million at Montreal to expand can production capacity and $13 million for a flexible packaging line at Toronto.

In Montreal, the company added a 355mL and 473mL can line, a 250mL can production operation and modernized two bottling and kegging lines. The largest investment by Molson Coors in its Canadian breweries in 2011, this was also the largest at the company's Montreal brewery in more than 25 years.

These enhancements in Montreal will enable Molson Coors to repatriate can production volumes destined for the Quebec market, while ensuring the competitiveness of company facilities in Montreal. The additional can production capacity will also allow for the production, exclusively in Montreal, of the new Coors Light Iced T, which launched across Canada in April 2012.

Additionally, setup of the new can line will make it possible to more rapidly achieve ambitious water and energy reduction targets set by Molson Coors, which has made responsible resource use a company priority. Indeed, the can line alone will enable Molson Coors to save 8.4 million liters of water in the coming year, the equivalent of 16 Olympic-sized pools of water.

Dave Perkins, president/CEO, Molson Coors Canada, says, "This major investment in the modernization of our [Montreal] brewery, the pride of Montreal for the past 25 years, speaks to our commitment to the future of Molson Coors in Quebec, but more importantly to our willingness to consistently raise our standards and ensure that our Montreal facility remains a model of innovation."

The new packaging line in Toronto is the only line offering such flexible production capacity for Molson Coors in Canada. It was installed in response to evolving consumer demand for a greater variety of packaging and will serve as an incubation line for innovative new formats. Its key differentiating feature is the option to add capabilities to fill and package a variety of different types of containers, allowing for a range of future packaging innovations.

The first new format to be produced on the new line in Toronto is the new Widemouth bottle made of 100 percent recyclable aluminum, which will be initially produced for Coors Light, Molson Canadian and Coors Light Iced T. The Widemouth feature offers a smoother and enhanced drinking experience. Great for outdoor occasions, the aluminum packaging can be resealed after opening, making it the suitable picnic, park or campsite companion.

Cathy Noonan, chief supply chain officer, Molson Coors Canada, says, "This major investment in the modernization of our [Toronto] brewery speaks to our commitment to innovation. We'll be able to develop new products more effectively, so we can focus on creating industry-leading packaging formats for our Canadian consumers."

The installation of these new lines follows other recent investments in the province, such as the addition of new fermentation tanks to the Molson Coors Toronto brewery in early 2011, translating into capital investments of nearly $90 million in Ontario alone since 2010.