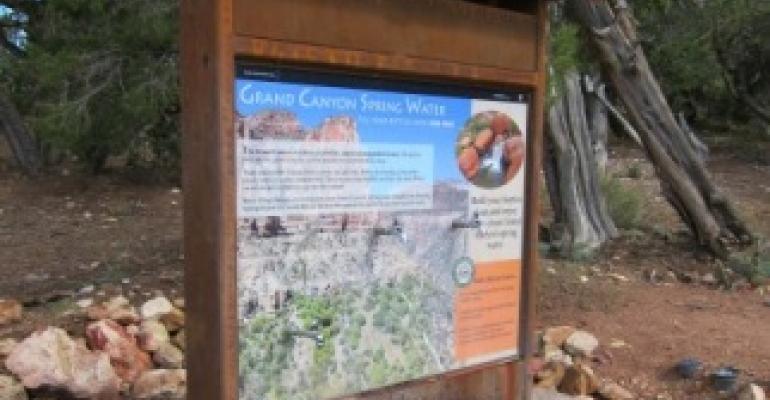 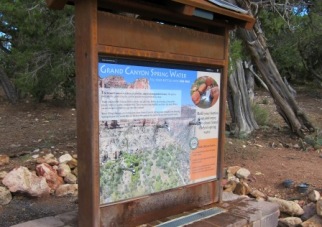 Those seemingly ubiquitous disposable plastic bottles, the ones that generated a storm of controversy over their proposed ban at Grand Canyon National Park, may now be banned by park superintendents nationwide.

But first superintendents must conduct a somewhat arduous series of extensive studies that include, among other things, review of the amount of waste that could be eliminated from the park; the costs of installing and maintaining water filling stations for visitors; the resulting impact on concessionaire and cooperative association revenues, and; consultation with the Park Service's Public Health Office.

Then, too, they must consider "contractual implications" to concessionaires, the cost and availability of BPA-free reusable containers, and signage so visitors can find water filling stations. Also, they need to take into consideration safety considerations for visitors who might resort to drinking water "from surface water sources with potential exposure to disease" or who neglect to carry enough water with them on hikes.
Notice of Director Jon Jarvis's decision on banning the bottles came Wednesday in a directive sent to all regional directors, who in turn distributed the policy memo down the line.

"Sustainability is a signature effort for the National Park Service. We must be a visible exemplar of sustainability, so it's important that we move our sustainability program forward as an organization. While superintendents need some discretion to tailor implementation to local situations, it is not the purview of any one park to set policy," director Jarvis says.

The directive comes little more than a month after the director was portrayed as bowing to corporate pressure for telling Grand Canyon officials to hold off on implementing a ban on the plastic bottles. According to a string of documents and emails obtained by Public Employees For Environmental Responsibility, Director Jarvis put the ban on hold after Coca Cola officials raised concerns with the National Park Foundation, which in turn contacted the director and his staff.

At the time, Park Service officials said they weren't bowing to corporate pressure but simply conducting due diligence on the impacts of such a ban. For instance, they said at the time, how might the safety of visitors to Southwestern parks such as the Grand Canyon, Arches, and Canyonlands be impacted by a ban?

"Jon Jarvis wants to get rid of water bottles in parks. That's the goal. We want to do this," agency spokesman David Barna told the Traveler early this month. "The issue with Grand Canyon is it's such a big park and it sets such a big precedent."

In his directive, Director Jarvis cited the Park Service's Green Parks Plan, which has a goal of reducing waste in the parks, in part by offering water bottle refilling stations in at least 75 percent of park visitor centers by 2016, the year the agency marks its centennial. That plan currently is under final review and is expected to be released early next year, he said.

As for banning disposable plastic bottles, Director Jarvis outlined three steps superintendents must take to implement a ban: "Complete a rigorous impact analysis including an assessment of the effects on visitor health and safety, submit a request in writing to their regional director, and receive the approval of their regional director."

In his correspondence to the field, Director Jarvis touched on the "symbolism" of banning the bottles from national parks, but also noted the potential consequences of such a move.

"Banning the sale of water bottles in national parks has great symbolism, but runs counter to our healthy food initiative as it eliminates the healthiest choice for bottled drinks, leaving sugary drinks as a primary alternative," he wrote. "A ban could pose challenges for diabetics and others with health issues who come to a park expecting bottled water to be readily available.

"For parks without access to running water, filling stations for reusable bottles are impractical. A ban could affect visitor safety; proper hydration is key to planning a safe two-hour hike or a multi-day backcountry excursion. Even reasonably priced reusable water bottles may be out of reach for some visitors, especially those with large families.

"For these reasons, the National Park Service will implement a disposable plastic water bottle recycling and reduction policy, with an option to eliminate sales on a park-by-park basis following an extensive review and with the prior approval of the regional director."

Under that policy, parks are encouraged to have "robust" recycling programs, use education to convince visitors to reduce their use of disposable plastic bottles, and, "where appropriate," institute bans on the bottles.

Operations in at least two parks, Zion and Hawaii Volcanoes, already have bottle bans in place. At Hawaii Volcanoes, where the cooperating association decided to stop selling disposable bottles, the association estimated it will gross $80,000 a year in reusable bottle sales and will net a profit. At Zion, concessionaire Xanterra Parks & Resorts, which came up with the idea of banning disposable water bottle sales, lost $25,000 in 2009-10, according to the memo. However, the move at Zion reduced the waste stream by roughly 5,000 pounds annually and cut energy consumption in the visitor center by about 10 percent during 2009-2010.

In his directive, Director Jarvis said that parks that already have implemented bottle bans may leave them in place, but going forward must still address in writing to their regional directors the studies into the impacts of such a ban.