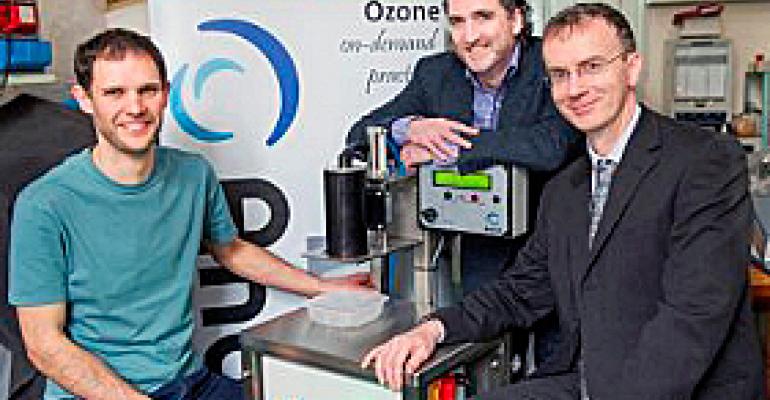 Scientists at the University of Glasgow, Scotland, have developed a new method to make package 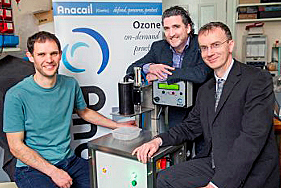 d food safer for consumers and more long-lived on the shelf by harnessing the germ-killing power of ozone. Dr Declan Diver and Dr Hugh Potts of the University's School of Physics and Astronomy have prototyped a system to rapidly, safely and temporarily turn some of the oxygen inside the sealed packaging into ozone, a very effective germicide.

Plasma generated by a retractable device held briefly against the surface of plastic or glass packaging splits the bonds between oxygen molecules (O2) inside the packaging which then reform as ozone (or O3). The ozone naturally returns to its original state after just a couple of hours - more than enough time for any mould, fungi or bacteria on the packaging's contents to be destroyed without adversely affecting its taste.

The product's effectiveness as a germ-killer also extends food's shelf-life by at least one extra day, which could go a significant way to cutting down on the seven million tonnes of food discarded in the UK each year.

The product is being brought to market by a University spinout company called Anacail, which means ‘shield', ‘preserve' or ‘protect' in Gaelic. Anacail was founded in January 2011 and has recently raised £750,000 of seed funding from leading technology commercialisation company, IP Group, and the Scottish Investment Bank, a division of Scottish Enterprise. Half of the funding is subject to satisfaction of certain technical and commercial milestones.

Anacail Chief Executive Officer Dr Ian Muirhead said: "We're very excited about the applications of our product. It's safe and easy to use, doesn't require any change in current packaging of food products to be effective, and it doesn't require any chemical additives - the sterilisation effect comes directly from oxygen already in the package which is treated by our plasma head.

"Although ozone can be harmful to humans, it has a very limited lifespan before it returns to oxygen and it doesn't leave behind any dangerous residues so it's perfectly safe to use in food decontamination. It's a very effective way to destroy or inhibit the growth of bacteria and viruses.

"We're currently seeking development partners to scale our product into full manufacture. Although we're initially concentrating on offering Anacail products to the food industry, the process could be equally useful in for the sterilisation of medical and dental equipment and perhaps even for use in the home."

The efficacy of Anacail's prototype has been proven at leading UK test labs including Campden BRI in Gloucestershire. Tests have shown an increase in shelf-life for products including bread and muffins, and a significant reduction of many pathogens in poultry including campylobacter, pseudomonas, and E.coli.

Scottish Enterprise, through its Enterprise High Growth Start Up unit, has supported Anacail from the beginning of the spin-out process; contributing to its business strategy and plan; making introductions to industry experts, key suppliers and sub-contractors; and offering advice on R&D grants and financial support for the CEO Designate. The latest round of funding from the Scottish Investment Bank demonstrates that SE's support will continue as the company develops its team, products and markets.