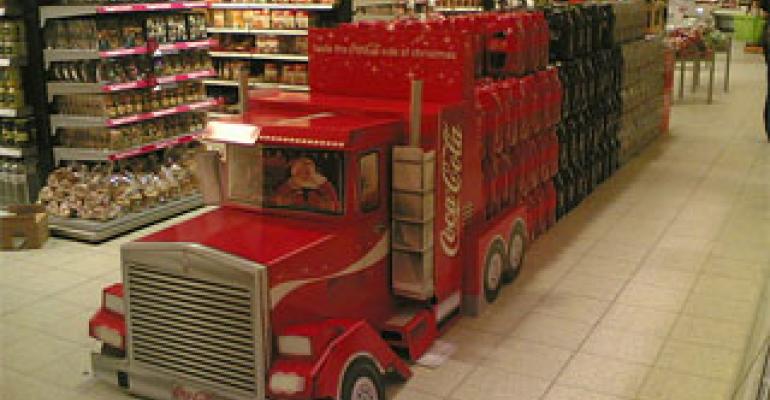 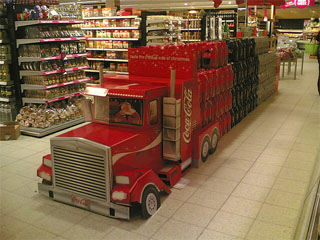 Those six-packs of Dasani water didn't wind up under the banana display by accident. Fifty-nine percent of grocery shoppers visit the produce section, where the sheathed yellow fruit is the most popular item, and health-conscious consumers might be tempted by Dasani's eco-friendly bottles.

Similarly, those 2-liters of Coca-Cola were set out by the precooked chicken to suggest to Mom or Dad they might want to take one home for a family meal.

And that Coke Zero by the beer cooler? That targets your designated driver.

A year after a corporate restructuring, the Coca-Cola Co., owner of these and more than 500 other beverage brands, has sharpened its sales and marketing efforts in a drive that executives say is making their business more competitive despite a lingering economic funk and rising commodity costs

.
Earlier this month, the Atlanta-based company announced an 8 percent increase in third-quarter profit, to $2.2 billion worldwide, and 15 percent growth year-to-date. Specifically in North America, its largest market, Coca-Cola boosted sales of its still and sparkling beverages even as it raised prices to retailers by 3 percent. The performance exceeded Wall Street expectations.

Retailers' needs
Meeting with analysts and reporters last month in Houston, executives repeatedly credited the integration in 2010 of the North American bottling and distribution operations of Coca-Cola Enterprises with eliminating redundancies in sales forces and enabling the company to work more efficiently with retailers in coordinating sales of multiple brands and package sizes.

For example, some accounts previously would have been called on by one representative for fountain drinks and another for cans or bottles; juice or water sales might be handled by someone else still, and all may have been more concerned with their individual performance than with meeting retailers' actual needs.

Now, with a single person handling each account, the two sides can determine optimal supply and brainstorm promotions.

"For every occasion," said Rick Kehr, a Houston-based vice president, "we have the right brand in the right package at the right price point."

'Points of inspiration'
Mel Landis, chief retail sales officer for what is now Coca-Cola Refreshments, told the gathering in Houston that the company strives to be its retail clients' "most valuable partner," in part by "leveraging one Coca-Cola voice."
He called that a "critical, critical change" -- and the same message was repeated at all levels, from the executives taking the podium to the young account representatives who led tours of the outlets they service.

Anyone who thinks that after 125 years Coke products simply sell themselves should note how strategically the beverages have moved beyond the soft-drink aisle.

CVS might have 7.5-ounce "slim cans" of Diet Coke near women's makeup, for example, while La Michoacana might line the bottom of its oft-visited meat counter with family-sized bottles of Coke. And convenience stores have joined restaurants in advertising discounts for combo-meal purchases.

The company calls these "points of inspiration." While the concept behind them isn't particularly novel -- it's the same reason stores stock chocolate syrup in the ice cream aisle -- Coca-Cola has fine-tuned the approach and raised its priority level.

This vision may come from the boardroom, but success depends on a sales force speaking a rigidly consistent message.

Competition
During a tour of several retail outlets in the Houston market, enthusiastic account reps armed with portable electronic devices and real-time sales data repeated the company's talking points and boasted of the results:
A Kroger had 58 "opportunities" for customers, from a football-themed display near the entrance -- 60 percent of all shopping trips take less than 20 minutes, after all -- to the fuel pumps in the parking lot. That compared with around 10 such inspiration points two years earlier. Account executive Bryan Hardy said Coca-Cola has a 52 percent share of beverage sales in the store.

A Family Dollar showed double-digit sales growth, said district sales manager Kali Isaac. That included an 80 percent jolt in the 12- to 20-ounce bottles and cans packaged for "immediate consumption" that make up nearly a quarter of sales in the store.

Sales were up, too, at a La Michoacana boasting 23 points of inspiration. Account manager Matthew Flores pointed out that many of them involve 2-liter bottles intended for large family purchases or 20-packs of cans that construction workers can take to job sites.

'Pretty fierce'
Dave Novosel, senior analyst at Gimme Credit, which provides research on corporate bonds, agreed that the challenges are daunting in an industry that is no longer defined as Coke vs. Pepsi. Think not just of sodas, but all the waters, teas, juices and energy drinks on the market.

"The competition is actually pretty fierce for the overall beverage dollar," said Novosel. "... It requires a lot of marketing and promotional support."

The gains from those efforts, in turn, have to be balanced against how much they cost. Further complicating things this year, the analyst said, the prices Coca-Cola pays for ingredients have risen more steeply than expected.
Still and all, Novosel called the company's earnings "very impressive."