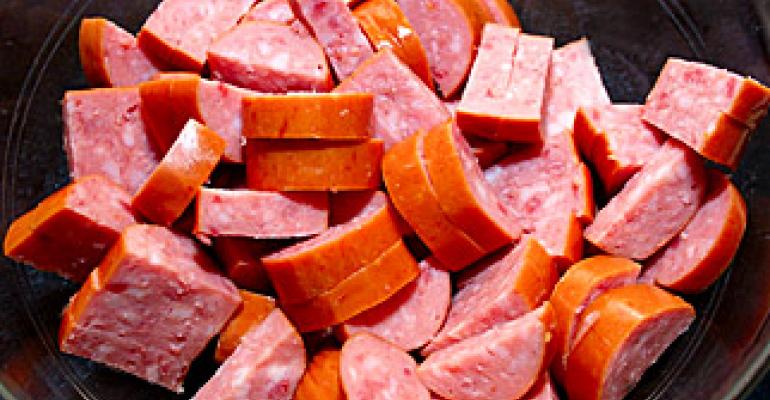 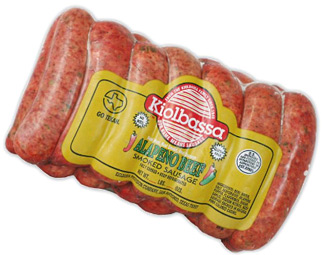 A new shrink-film packaging machine is paying off big for Kiolbassa Sausage Co., San Antonio, TX, in higher productivity and reduced labor and material costs. Kiolbassa, which started as a small meatpacking company in 1949, has grown to become a major Texas sausage manufacturer that produces more than 50 SKUs including beef, cheddar, mesquite and Polish style smoked sausage in 20- and 40-oz package sizes, as well as a 12-oz package of chorizo smoked sausage. The 20- and 40-packages contain seven and 14 links respectively.

“We had been putting the sausage links into bags that were then vacuum-packed and shrunk on a rotary chamber machine,” says president Michael Kiolbassa. “This worked well, but placing that many links in a bag could be difficult, and as we increased production, the labor requirements became prohibitive. We had been using a chamber machine, and Multivac approached us about installing one of their FormShrink machines.”

The proprietary Multivac FormShrink packaging process uses special high-shrink thermoforming films that shrink tightly when passed through a heating tunnel. This results in an attractive package with a second-skin appearance around the contours of the product. The process minimizes excess packaging and the “dog ears” often associated with shrink-bag packaging.

“We didn’t want to sacrifice the look we achieved with the bags, but the FormShrink uses printed film that is synchronized top and bottom, and the finished packages look just like the bags,” says Kiolbassa. “We ran the numbers, and it looked like the rollstock machine would save us a lot of money, so we decided to go ahead with it.” Kiolbassa installed the Multivac Model R-250 FormShrink machine in April of this year. 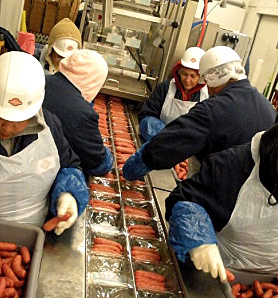 Top and bottom films are registered
Kiolbassa is using Form-Tite® film from Curwood for its packages. A coextrusion of nylon and EVOH, the film was developed in cooperation with Multivac to optimize the equipment’s performance. Features of the film include low curl plus high shrink and excellent formability to conform tightly to the product, creating an attractive package without dog ears. The film’s high-barrier properties and exceptional puncture resistance extend shelf life and minimize damage and waste throughout distribution.

The R-250 uses two rolls of Form-Tite film to form the package. Both rolls have similar nylon and EVOH construction, but the bottom roll, which forms the cavity for the product, is 100-microns thick, while the top roll, which is sealed across the tops of the packages, is 50-microns thick. The two rolls of film, both of which are flexo printed in eight colors, are registered during the operation to produce the final package.

Multiple steps
To produce the finished package, the intermittent-motion FormShrink machine incorporates a series of steps that start with a bottom-forming station and finish with the package discharge. To start with, a chain with grippers pulls film from the bottom roll mounted on the front of the machine. This chain maintains control of the film through the length of machine.

The formed cavities are then transported into the loading zone, where workers manually place the sausages into the pockets. Next the filled pockets enter the sealing and evacuating station, where a second chain with grippers pulls the top film off of the roll, which is mounted above the machine, and moves it precisely above the cavities. This chain is slaved to the primary chain to maintain precise synchronization of the bottom and top webs. Both chains are driven by Servostar® servodrives from Kollmorgen. The discharge conveyor from the FormShrink machine is driven by a Model Movitrac® servodrive from SEW-Eurodrive Inc.

Top and bottom film registration
Each roll of film is printed with each image slightly shorter than required and the film is stretched for each package to achieve exact registration of the webs. The amount of stretch required, which is determined by the result of the stretching on the previous package, is regulated by the controls on the machine.

After the air has been evacuated from the packages, heated seal bars descend and seal the top film to the bottom web of film. Because this is heat-shrink film, water cooled isolation plates descend onto the tops of the trays before the sealers come down to ensure that no premature shrinking of the top film takes place. The plates leave only the seal area exposed to the sealers.

The packages, which are still connected together by the top film, next enter the form cutter, where knives cut the packages apart. Because the packages are rectangular, there is no extra film between them, but the excess edge trim is cut off and wound onto an overhead roll. The packages then travel through a hot-water bath (which is not part of the FormShrink machine), where the film is shrunk tightly around them.

Each package size run on the FormShrink machine requires dedicated time and temperature setting for each step of the process, as well as other operating parameters. Once these have been established and entered, however, they are retained in memory and can be recalled and automatically entered into the machine by a keystroke. The FormShrink machine uses a Windows CE operating system on an industrial PC from Beckhoff Automation LLC. It also incorporates a Beckhoff HMI.

“With the FormShrink machine, you have to change the film for each product and change the cavities for each package size, so we had to revise our production schedules to have longer runs of each product and package. Bu Multivac had people here to help us, and the system is working really well now.”

Plant manger Ismail Jaber concurs. “We’re thrilled with the FormShrink machine,” he says. “It has surpassed our expectations. Both Multivac and Curwood had a crew here for several weeks, and they gave our people really intensive training. This is our busy season, so we’re running the machine 12 hr/day, six days/week, and we’ve had no problems.”