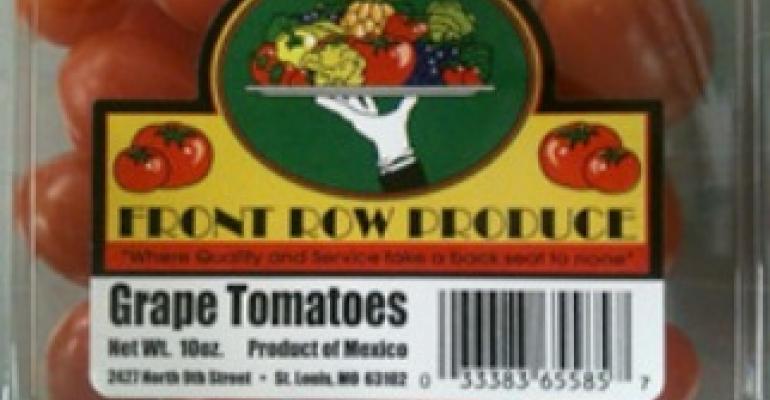 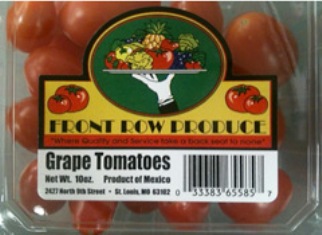 Front Row Produce of St. Louis, MO is recalling its 10oz pint and 10lb bulk grape tomatoes supplied by Rio Queen Citrus, Mission TX, because they have the potential to be contaminated with Salmonella, an organism which can cause serious and sometimes fatal infections in young children, frail or elderly people, and others with weakened immune systems. Healthy persons infected with Salmonella often experience fever, diarrhea (which may be bloody), nausea, vomiting and abdominal pain. In rare circumstances, infection with Salmonella can result in the organism getting into the bloodstream and producing more severe illnesses such as arterial infections (i.e., infected aneurysms), endocarditis and arthritis.

The recalled 10-ounce pint and 10-lb bulk grape tomatoes were distributed throughout Missouri and Illinois to foodservice distributors and retail stores.

The product for retail sale is packaged in a 10-ounce, clear plastic package marked with a Front Row Produce "Grape Tomatoes" label on the top of the package. Currently, the lot number does not appear on the clear plastic package but it does appear on the case label. The lot numbers on the cases containing the 10-ounce packages are 2310802, 2310405, or 2510401. The 10-lb bulk grape tomatoes are packaged for wholesale in a plain brown cardboard box labeled only with lot # 2310801.

As of 12/1/2011, all shipments of Front Row Produce Grape Tomatoes packaged in clear 10-ounce plastic packages sold in retail stores will now have a green lot number sticker placed on the bottom side of each package. The lot number will consist of a 7-digit number used to aid in identifying specific shipments of product. Any packages that do not contain this green sticker should be considered suspect and under recall.

No illnesses have been reported to date in connection with this problem.

The contamination was noted after random testing by Rio Queen Citrus, Mission TX, revealed the presence of Salmonella in some 20lb bulk containers.

Production of the product has been suspended while FDA and the company continue their investigation as to the source of the problem.