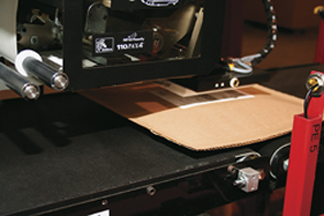 The distributor offers what it calls a Consumer Direct Fulfillment (CDF) service within its distribution channel, in which e-commerce retailers relay small, individual orders to Alliance for shipping directly to consumers. The CDF order volume handled by the company's distribution center has become vast—more than five million orders were shipped last year.

Because of the sheer volume of orders, Alliance requires speed and accuracy in shipping, and the labor involved in sorting, labeling, packing and shipping the orders has become intensive.

“In our CDF operation, a typical nonpeak day, calls for the processing and shipping 10,000 to 15,000 orders,” explains James Rink, vp of Alliance's Distribution and Fulfillment Group. “During the holiday season, the number is higher—a many as 50,000 orders per day,” he says. “It became clear that our largely manual pick-and-pack system was simply not sufficient to support these volumes cost-effectively or to provide our customers and their customers with better service.”

At the time, the laborious pick-and-pack method for CDF orders was handled on a batch basis, and staffers would place 36 items per pick into a tote. The batch was then sorted into individual orders that were transferred by cart to the packing area. There, workers would evaluate each order, hand-pack the items into an appropriately sized shipping case and place a “license-plate” on the outside of the case to identify the order. The cases were then conveyed to a shipping area where they were weighed and received manifest data and shipping labels.

E rrors began to cause costs to rise and created a surge in the company's order-return rates. Stymied by the high volumes and by processing complexity, the company's mostly manual packing operation couldn't keep up which led the company to re-evaluate and re-engineer the CDF distribution operation.

In an effort to increase speed and efficiency, Alliance deployed a sequenced-automation process to weigh, manifest and label the shipments by scanning the license plate on the outside of the packaged order. But if a worker disturbed the sequence for any reason, not only could the wrong label be applied to a package, the entire batch could be thrown out of sync, with no quick way to verify that the orders in the package exactly matched the labels on the outside.

“You can imagine the customer's dissatisfaction when they received the wrong shipment, or if a shipping label read Customer A instead of Customer B,” Rink points out. “Then we had to pay for the customer to return the item and then we had to consequently send the customer the correct item. We obviously had to do something to improve the accuracy of the CDF distribution process. Radio-frequency identification [RFID] labeling technology offered an innovative packaging solution.”

Alliance then initiatied an RFID pilot in 2005 to help streamline the order-fulfillment operation, with goals of increasing accuracy, efficiency and throughput, without taking up more warehouse space, which was already constrained. The company enlisted the help of Avery Dennison (www.rfid.averydennison.com) and Weber Marking Systems (www.webermarking.com) because, as Rink says, “they're two companies noted for their respective RFID knowledge.”

When it came time to specifying an RFID labeling solution, Rink says he found that “quarterbacking his team's learning curve and hardware selection path was much more difficult” than expected. Acting as the project's coordinator, he initially selected the discrete components for an RFID solution and implemented a limited-scope pilot test. The test proved that RFID tag read-rate performance was unacceptable—only about 80 percent. Rink speculates that this problem may have been caused by foil graphics commonly used on the covers of some DVDs and CDs. “Metallics are known to be problematic for UHF RFID readers,” he says. “But even after changing out the hardware, our read rates were still not approaching one-hundred-percent, which is where they needed to be.“

At that point, Alliance decided to partner with Avery Dennison and Weber Marking. Avery Dennison's Real-World™ RFID Testing Center in Atlanta helped launch the pilot off the ground by developing an extensive testing process to help ensure Alliance's application would perform to expectations in its actual distribution center environment. Both Avery Dennison and Weber Marking worked closely with Alliance to test the application at the 50,000-sq-ft Atlanta Technical Center (ATC). 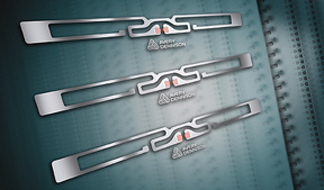 EPC-compliant RFID tag inlays, designed for high performance and high-volume labeling, are converted into labels and are enclosed with Alliance’s small orders.

Open to end users, label converters, system integrators, OEMs and companies evaluating new uses of RFID to improve their business operations, the ATC offers the opportunity to test the performance of RFID tags across a range of industrial environments, from static to fully dynamic. The Flowery Branch, GA, center has simulated distribution testing areas equipped with high-speed conveyors, portals, RFID printer/encoders and printer/applicators, RFID readers and intelligent software. Companies such as Alliance can consult with the center's RFID team and test a variety of product types, RFID tag types, tag orientation and positioning and carton orientation to find the best solution for specific applications.

Alliance visited the center to help implement an RFID- enabled system capable of validating the accuracy of its orders without a direct line of sight, Rink says. “Testing our solution at the ATC really kept us on track and turned the project around. The ATC is dedicated to offering customers a 'vendor-neutral' approach to RFID testing. We had access to many different combinations of RFID inlays and tags, labels as well as leading brands of printer/encoders and tag readers without having to purchase the hardware ourselves. We were able to evaluate several brands of products and supplies and compare their performance results. We gained confidence working with a team of experts who have helped other companies achieve success with RFID implementations. This helped us select an integrated solution that really works.”

Rink adds that Alliance found Avery Dennison's testing facility and its team-based, consultative approach to be a huge time saver. He brought with him “scores” of Alliance's most challenging entertainment products and packaging to be tested, including the foil-wrapped CDs and DVDs, knowing that an integrated system that performed well on the foil-wrapped products would be able to support the rest of the product lines.

An RFID solution was developed and installed as an integral part of an automated material-handling and conveying system designed and engineered by Alliance's system integrator Cornerstone Automation Systems (www.cornerstoneautosys.com).

Alliance also added two automatic cohesive pouchforming/cold-sealing machines to the lines from System Packaging (www.systempackaging.com) to handle orders containing one to four items, such as CDs and DVDs. This installation also sped up production, and was critical as such smaller orders constitute about 80 percent of the product orders the company processes. Alliance also re-engineered its conveying system for a more streamlined workflow by adding a new, automatic conveying system provided by Cornerstone.

The Alliance team ultimately selected Avery Dennison's AD-220 RFID tag inlay, which Weber Marking converts into labels. The EPC-compliant, general-purpose inlay is designed for high performance and high-volume labeling applications. Alliance also chose RFID printer/encoders from Zebra Technologies (www. rfid.zebra.com) and Speedway UHF RFID tag readers from Imprinj (www.impinj.com/rfid). The Speedway's high performance, coupled with antennas from Cushcraft (www.cushcraft.com), proved to be a winning combination, Rink reports. Once the components were selected, implementation of the RFID tracking system in Alliance's distribution center near Louisville, KY, took about six months. That was followed by a second installation in the company's facility in Coral Springs. Today, Alliance has two of the automated packaging and labeling lines up and running in the Kentucky facility and three lines operating in Florida.

The new process involves printing two labels for each order, using labels provided by Weber Marking. One of the labels is RFID-enabled and is supplied in fanform. Encoded with the order identification number, this RFID “smart” label doubles as the “e-retailer” invoice and can be imprinted with the e-retailer's logo.

The other label is a pressure-sensitive return-policy label, imprinted with Alliance's customer-return policy and return instructions.

The two labels accompany a picked order placed onto a chain-induction conveyor feeding one of two pouchforming/sealing machines.

A bottom web of the pouch material runs over the infeed table and carries the stacked products into the sealing station.

The upper roll of pouchstock joins the base web to form a protective pouch. As the pouch is formed around the items, it sandwiches them between the two webs, and the edges of material are sealed with a cohesive coating. 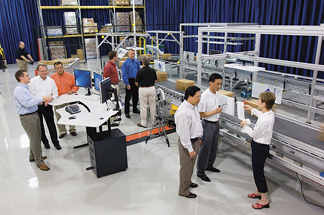 The finished package then emerges from the machine and is conveyed to the shipping area, where it first passes through small portals equipped with a fixed Speedway RFID tag reader that identifies and validates the shipment. The fixed read distance is a mere 6 in.

Packages that pass the RFID reader validation step then convey to a weighing area where they are weighed and the weight is recorded on a shipping manifest. Weigh scales were provided by Cornerstone as part of the pre-engineered system.

The package then receives a 436-in., p-s bar-coded shipping label supplied by Weber Marking on rolls. Otherwise known as the “license plate,” this outer shipping label is printed with specific product identification information on-demand and is applied by a Weber Marking Model 5200 printer/applicator equipped with a Zebra 110PAX4 print engine.

After the package exits the printer, the license plate label is scanned by a DataLogic (www.datalogic.com) DS 2200 laser line scanner with a built-in decoder to verify that the encoded RFID chip in the package matches the bar-coded product identification on the shipping label. If it does not, or fails to read accurately, the rejected package is pulled off the line and is manually checked and corrected before shipping. The validated packages finally proceed to a sorting area for shipping via various common carrier services.

Alliance utilizes a large number of labels daily with its new fulfillment process, and Rink credits Weber Marking with being able to replenish the label supplies on a timely basis. “Our storage space for consumables is extremely limited at the distribution centers, so we really appreciate this level of customer service.”

Implementing RFID in the closed-loop, internal CDF service has resulted in fewer shipping errors that have, in turn, produced dramatic cost savings. Implementing the RFID-enabled consumer-direct fulfillment system has significantly cut labor and shipping costs related to returned-order claims “beyond even our best expectations,” asserts Rink. “This, combined with the time and labor savings associated with the pouchforming machines, completely justifies our investment in the automated equipment.”

Rink also notes that the operators involved in processing the orders have adapted easily to the new system. “Their workflow is faster and less stressful, so the operators can be more productive,” he says. “They no longer have to manually fold invoice and return sheets and can verify that the contents of each package match the shipping label information with a simple scan of an RFID reader.”

The project was such a “box office” hit that Rinks says Alliance is now working on ways to process larger, direct-to-consumer orders involving four to 24 items each, using the RFID technology. Concludes Rink, “As we take further steps to integrate RFID into our fulfillment processes, we will thoroughly performance-test new applications at Avery Dennison RFID's Atlanta Technical Center.”