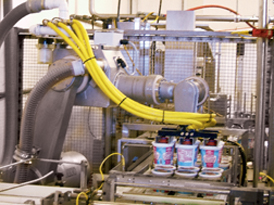 Dean Foods is one of the leading food and beverage companies in the U.S. Its Dairy Group is the largest processor and distributor of fresh milk and other dairy products in the U.S., with products sold under more than 50 local and regional brands and a wide array of private labels. The company's WhiteWave Foods subsidiary is the nation's leading organic foods company. Dean Foods also owns the fourth-largest dairy processor in Spain and the leading brand of organic dairy products in the United Kingdom.

Dean Foods' manufacturing plant in O'Fallon, IL, Pet Dairies, produces a wide variety of dairy products for some of the country's most widely recognized national dairy brands. When it found itself in need of automating part of its packaging line, plant personnel contacted Forte Automation Systems, Inc. (www.forteautomation.com), Rockford, IL, a Kuka Robotics Corp. (www.kukarobotics.com) system partner. The plant was using manual labor for case packing and palletizing, and it needed to automate these tedious and potentially dangerous tasks, so that it could reallocate its employees to more complex and safer tasks.

Forte reviewed the facility and recommended two Kuka robots. The case-packing portion of the line required strict adherence to hygiene guidelines, so Forte suggested the use of a Kuka KR 15 SL stainless-steel robot. The six-axis robot is made exclusively of stainless steel and, with its high IP rating, it is suitable for all applications with stringent requirements for hygiene, sterility and absence of particles, such as the food and beverage or medical industries. (IP stands for “Ingress Protection,” and an IP number is used to specify the environmental protection of enclosures around electronic equipment.)

The robot at Pet Dairies is positioned on a cottage-cheese packing line. After the cottage cheese is filled into individual tubs, they are conveyed to the case-packing area, where the Kuka KR 15 SL robot picks up six containers at a time and places them into six-pack corrugated trays. The robot can complete one tray every 3 sec—a rate of 120 tubs/min. 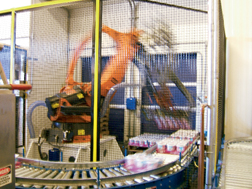 The packaged product passes through a metal detector and continues down the line to the palletizing area, where a palletizing robot picks up either three or five corrugated trays at a time and places them on the pallet. The system can complete a pallet in about 7 min.

The packaged product passes through a metal detector and continues down the line to the palletizing area, where Forte installed a Kuka KR 180 PA palletizing robot. The robot picks up either three or five corrugated trays at a time and places them on the pallet. The system can complete a pallet in about 7 min. Once a pallet is complete, a cooler door provided and installed by Forte is automatically opened, and the full pallet is conveyed to the cooler, where two full pallets can be staged. From the cooler, the pallets are placed in storage via forklift.

The Kuka KR 15 SL robot is a six-axis, articulated device with jointed-arm kinematics for all point-to-point and continuous-path controlled tasks. It is highly resistant to vibration and has an IP67 rating to withstand washdown. The Kuka KR 180 PA is a four-axis robot, whose third-axis linkage is made of carbon fiber composite material. This state-of-the-art material makes the robot lightweight without sacrificing high stiffness. This allows it to stack loads weighing up to 397 lb to heights up to 10.5 ft, at rates as high as 600 palletizing cycles/hr.

The robots' high performance reliability increased the dairy's efficiency, and the advantages of the stainless-steel robot helped the company maintain hygienic quality control.