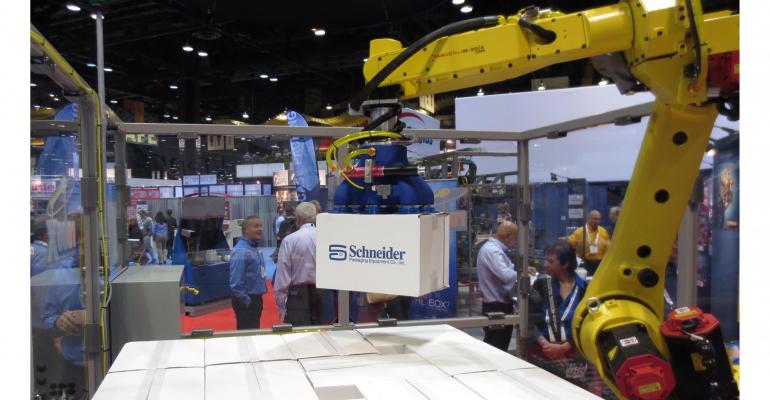 Some of the more revolutionary packaging robots and robotic systems on display at Pack Expo 2014 demonstrate how useful these systems have become. You’ll find two different kinds of “collaborative” robots, one robot that’s literally very cool, another that uses 3D-printed tooling and a palletizing robot that adapts to imperfections in the real-world. In short, robots’ skillsets are expanding on all fronts.

I went to Pack Expo 2014 in Chicago with a lot of anticipation, including the expectation of seeing more packaging robots than ever before. However, the amount of robotics that I saw over the four day run of the show and their functionality was staggering.

Robots were found everywhere throughout the halls and in greater numbers than ever before. They were there as standalone systems for palletizing and other functions and they were integrated into OEMs’ case packers and other packaging machines.

While my at-show reaction is based on unofficial observations across many years of past iterations of the exhibition, it turns out that’s more than an impression: A check of the Pack Expo website reveals some 116 exhibitors cited by the keyword search “robots” and another 46 under “robotics.” Even with overlap, that’s an impressive amount. This proliferation of robotics in packaging reflects a much broader growth curve for this kind of flexible automation: The Robotic Industries Association, the industry’s trade group, reported in late July that the North American robotics industry is off to its fastest start ever in 2014.

The robots at Pack Expo were faster, stronger, smarter, capable of working within an expanded work envelop and with higher lift capacity. Improvements in hardware and software have made them smarter and nimbler, and some—including three reported here—react to changing conditions in the real world.

I was also struck by a shift in mindset; as one expert told me, “instead of it being referred to as a robot, it is now considered a loader.” I think that speaks volumes about robots’ acceptance as a more integral and integrated part of packaging operations and starts to blur the distinction between robots and hard automation.

What this all means is that robot manufacturers and packaging equipment vendors will continue to respond and remain proactive to their customer needs—and that means there’s no slowing down the influx of robotics into packaging operations.

Enough of the background...Take a look at these systems as seen at the show in the following gallery of 5 trend-setting robots.  Use the red View Gallery button above to access the slideshow.