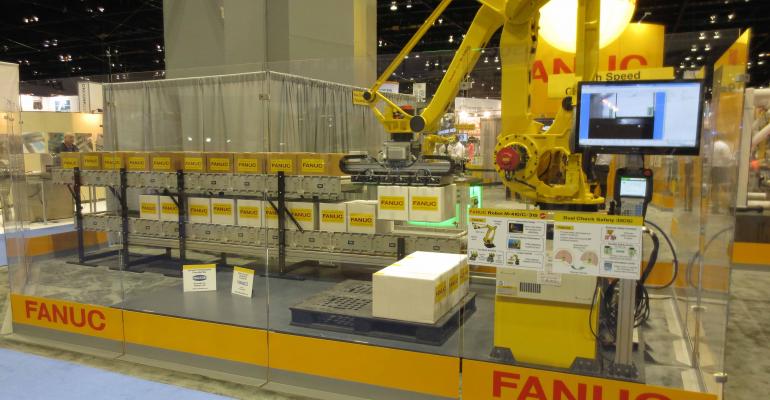 Start Slideshow ›
1. FANUC Robotics’ model M410-iC 315 palletizer was busy palletizing two or three boxes at a time into a neat pallet load before it purposely bumped the load to demonstrate that it could precisely relocate the skewed boxes and depalletize the load ahead of another round of pallet making.

NOTE: Use the Red Next button at the top to advance the slideshow.

1. Robots are nimbler and more adaptable in the imperfect environment of real-world installations: One of several impressive robots at the booth of FANUC Robotics was the model M410-iC 315 palletizer that was busy stacking boxes.

The robot could handle up to 315kg/695lb at a rate of 1,200 cycles an hour and was busy palletizing two or three boxes at a time at a rate of 50 per minute, according to Wesley Garrett, senior engineer, material handling.

What was especially remarkable about it was that it can adapt to changing conditions, which was demonstrated by having the robot bump a perfectly aligned pallet load it had just created. The M410 was able to adjust to the misalignment and depalletize the boxes without incident.

Now that’s a robot that can take better care of itself in an imperfect world.

2. Robot-human collaborative tasking is improved: Baxter the Collaborative Robot demonstrated the flexibility of a robot engineered to work with and alongside humans. As you can see, it is rather personable in doing so. Coinciding with Pack Expo, Rethink Robotics announced the availability of a new Robot Positioning System for which allows the robot to manage and adapt to dynamic (real-world) environments using its existing, embedded vision system.

The company has made 100 separate installs totaling 500 Baxter units in operation in the 18 months it has been available, with an estimated 30% or more of those in packaging operations.

For more on Baxter and its capabilities, see our online feature posted during Pack Expo.

3. Making robots more “pallet-able”: Robotic collaboration of a different kind was found at the booth of Yaskawa Motoman where the fully-loaded-with-robotics vendor demoed a pair of robots working collaboratively together, opening up new opportunities in palletizing for cross docking and other operations.  And it displayed its MH12 six-axis robot, shown.

4. 3D printing used in robotics: The compact RoBox palletizing system at Schneider Packaging Equipment combines the two major trends of smaller, more robust robotics—and with a longer reach—with that of 3D printing, used for the robot’s tooling. “We started 3D printing tooling about two years ago, the original reason was to reduce the number of parts and fasteners,” says Pete Squires, vice president. “Over that time, we have learned that 3D printing can be a cost-saving opportunity and can help to reduce weight. The tool we printed for this robot allowed us to reduce parts and simplify the tooling. We have been using more and more 3D printed tooling on our machines.”

The robot and programming provides the built-in flexibility to simplify the handling of multiple SKUs, often without the need for mechanical changeover.

5. Really cool, “unsuited” robots in a faux-snow wintry setting inside KUKA Robotics’ booth promoted the robots’ ability to withstand working in frigid temperatures. You can imagine the stress that frigid temperatures down to -30°C/-22°F puts on hydraulics and other components. One method to "temperature harden" robots has been to protect the key subassemblies with heated shrouds or “suits,” but those extraordinary means waste a lot of heat to the environment. Instead, KUKA QUANTEC PA arctic robots are suitably engineered to work optimally in those conditions in the refrigerated, frozen food and beverage markets with availability in 3 payloads of 120kg/265 lb, 180kg/399 lb and 240kg/529 lb.

You could say that robots are "coldly" going where no robots have gone before.