Experts provide guidance for robots and cobots in packaging 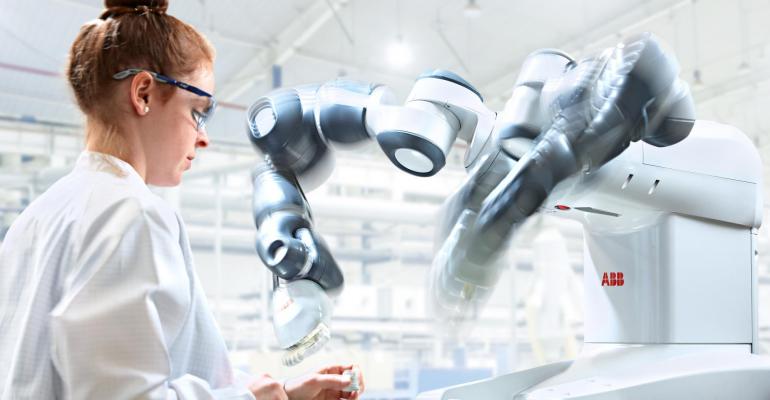 The market for robots and cobots is accelerating at a 50% yearly clip. Where do they best fit in packaging applications? YuMi cobot photo courtesy ABB Robotics.

When do robots make sense in packaging rather than hard automation? And when does a collaborative robot, or cobot, trump a robot? Three experts in packaging automation provide advice on robotics—plus a case study in which the first of three cobots had an ROI of less than two months.

The number of robot installations is accelerating: Between 2005 and 2008, the average annual number of robots sold was about 115,000 units, according to the International Federation of Robotics. Between 2010 and 2014, the number rose to about 171,000 units. This is an increase of about 48% and a clear sign of the significant rise in demand for industrial robots worldwide.

Just as dramatic in growth is the subsegment of robotics, collaborative robots, also known as cobots, which are growing at a slightly faster rate. The forecast for global cobots market is for a compound annual growth rate (CAGR) of just over 50% for the period 2014-2019, according to research firm Technavio.

This means there are more options for packagers and OEMs in the decision making process of considering and integrating robotics. For in addition to the question “When does robotics make sense in packaging over hard automation?” industry professionals may now also ask, “When does a cobot make sense?”

When do robots make better sense than hard automation?

Hard automation does not permit the user to have the flexibility to change the process, product nor improvements. If the customer wants to make a change, it is very costly in time and money.

Robotics offer the speed and flexibility to achieve changes in the product, process and implement new and continuous improvements.

Robotic systems are able to alternate among different products, product sizes and package configurations with minimal downtime, allowing manufacturers to respond to market demand in as close to real time as possible. Hard automation is typically dedicated to one type of product or product configuration, and is less adaptable to changing manufacturing conditions.

Mabie: When you need a reprogrammable automation solution that can handle more than one specific task, robotics makes better sense than dedicated, hard automation intended for single-purpose applications.

When does a cobot make sense?

Massoud: When there is interaction between a robot and human and can accelerate, improve and increase process efficiency and throughput. The combination and collaboration can have a net result that surpass the dedicated robot only or a human only.

Collaboration offers a new area that was not utilized before of a solo, not-so-dedicated robot nor as slow, weaker and imprecise as a human worker.

It is a new area where the robot by itself cannot achieve it 100% without too much expensive sensory and automation. Also the human by himself or herself cannot reach the throughput, speed and accuracy.  But together they complement each other and can reach new grounds.

Miller: Cobots, or collaborative robotic systems, make sense in a wide variety of scenarios, but from a macro sense it would be for applications where an elevated level of human-robot collaboration would provide an effective means to accomplish a task. By definition, a collaborative robot shares a workspace and works interactively with one or more humans.

Compared to conventional 6-axis industrial robots, collaborative robots move at slower speeds and have lower payloads, making them most appropriate for working with lower weight materials. A cobot would, therefore, be suited to assist a human in some sort of production or packaging environment that requires flexibility, but also some repetition and precision.

ABB introduced YuMi, its first collaborative robot,in April 2015. YuMi can operate in very close collaboration with humans due to its inherently safe design. It has a lightweight, yet rigid magnesium skeleton covered with a floating plastic casing, wrapped in soft padding to absorb impacts. YuMi is also compact, with human-like dimensions and movements, making human coworkers feel safe and comfortable. Potential packaging applications for YuMi include kitting of multiple components into packages, component assembly and packing of fragile materials.

Mabie: Unlike traditional industrial robots, collaborative robots are lightweight, flexible and can easily be moved and reprogrammed to solve new tasks, meeting the short-run production challenge faced by companies adjusting to ever more advanced processing in smaller batch sizes. With traditional robots, the capital costs for the robots themselves account for only 25 to 30% of the total system costs. The remaining costs are associated with robot programming, setup, and dedicated, shielded work cells. The “out of box experience” with a collaborative robot is typically less than an hour. That’s the time it takes to unpack the robot, mount it, and program the first simple task. Average payback period for UR robots is the fastest in the industry with only 195 days.

The term “collaborative” not only means that humans can collaborate directly with the robots potentially with no safety guarding between them. The way we see it, the term also addresses the ease of use; a robot is not truly collaborative if it’s not easy to work with. Our R&D team constantly works on improving what is already the most intuitive and accessible robotics user interface on the market today. You don’t need to be online to program a UR robot, it happens through the touchscreen on the teach pendant right next to the robot—or by simply grabbing the robot arm to demonstrate desired movement. In summary, a cobot is:

Next is a case study where the first of three cobots had an ROI of less than two months. 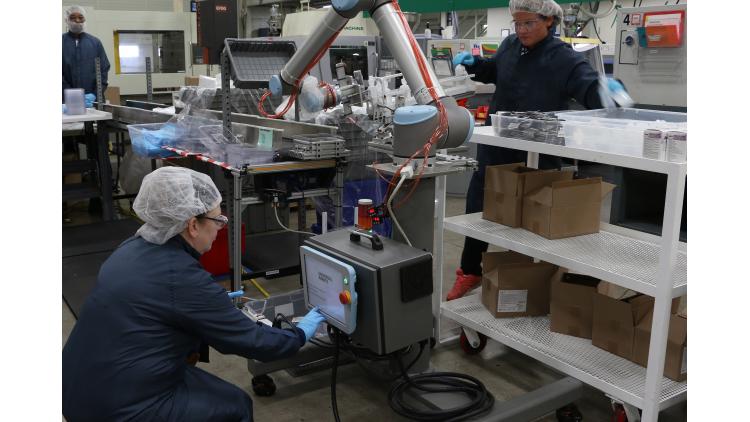 The collaborative UR robots work in tandem with employees at Dynamic Group, shown here in a kitting operation. Operators can easily interact with the robots through a touchscreen.

Cobots take over repetitive tasks, provide a 400% increase in production capacity for those applications.

Universal Robots’ Scott Mabie also provided us with a case study of a trio of cobots in a packaging environment at contract manufacturer Dynamic Group, Ramsey, MN. The UR robots work collaboratively alongside employees due to the built-in safety features that cause the robots to automatically stop operating when they encounter obstacles in their path.

Dynamic Group uses the cobots in three different applications: Two of them tend injection-molding machines while the third robot (seen in these images) is deployed in a kitting application. First, the UR10 robot picks up the bottom of a custom-made clamshell and then uses a vacuum gripper to pick up two sterile wipes along with some saline solution, placing these into the clamshell. Once items have been placed, the UR10 pushes the full clamshell onto a conveyor and repeats the cycle. 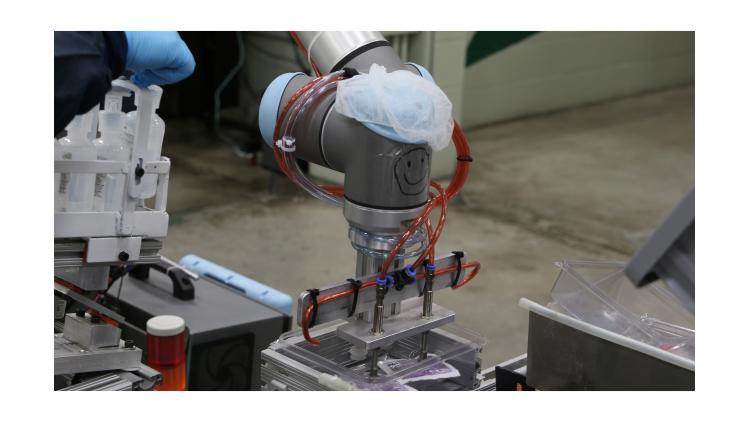 Equipped with a vacuum gripper, the UR10 robot picks up the bottom of a thermoform clamshell to be kitted with medical supplies.

Having the three collaborative robot arms from Universal Robots take over repetitive tasks have resulted in improved product consistency and a 400% increase in production capacity for those applications.

“The kitting task is a very fast paced and high volume application that was previously handled by six to seven employees. Now we’re able to run it with as little as two people,” says Joe McGillivray, Dynamic Group co-owner, who originally didn’t think his company could afford collaborative automation.

“When I started looking, I assumed I was talking hundreds of thousands of dollars per installation. I was surprised to find that we could afford a six-axis robot and a collaborative one at that,” McGillivray says. 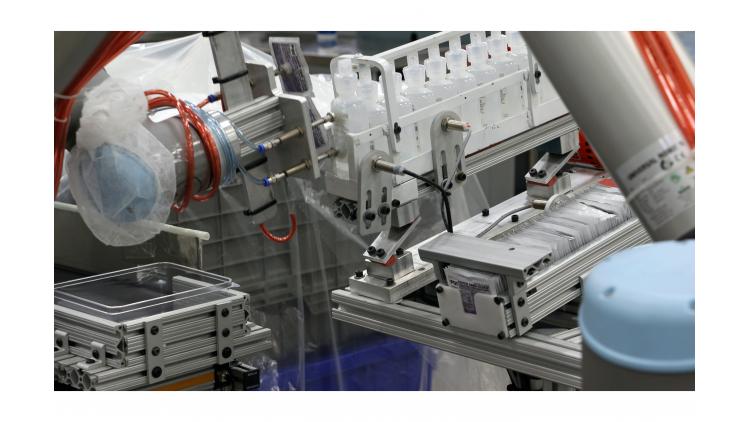 In the same cycle, the UR10 robot picks both the sanitary wipes and the saline solution, then places them into the clamshell.

“I also assumed that I would need a very expensive engineer to help me get these worked out. I’m not an engineer and within an hour of delivery, I had them set up and running basic programs," adds McGillivray. He estimates the return on investment on the initial system to be less than two months.

Some of the significant time and resource savings contributing to the fast ROI was the fact that the UR robots didn’t need safety guarding.

“While the robots’ safety features keep our employees protected, they’re allowed to literally interact with the robot. That’s a huge savings for us on time, needing to manufacture, and costs to manufacture safety enclosures. We’re also able to fit a lot more automation into a much smaller footprint,” says McGillivray.

Want to see packaging and automation technologies in action? Then attend WestPack 2016, Feb. 9-11, in Anaheim, CA.