How to Robotically Handle Trays for Parts Packaging 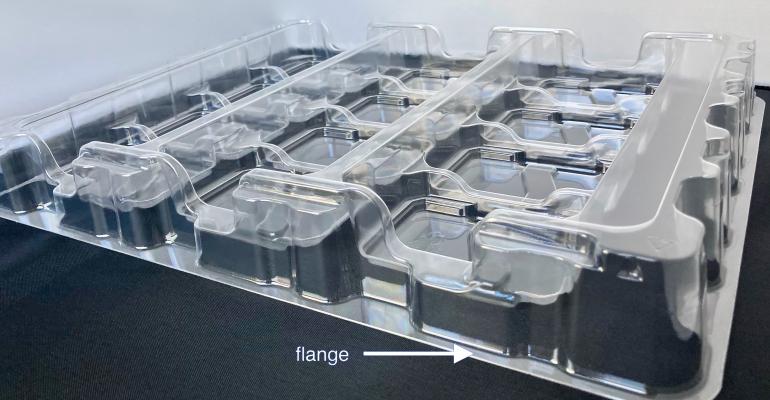 This tray shows Dordan's recommended 3/16-inch flange. But companies often request smaller flanges for their dunnage trays, which makes locating the tray via the flange so tricky. Variations as small as 10-thousandths of an inch can make or break the success of automated handling.
There’s one big pitfall in automating your work-in-process parts assembly with dunnage trays: Locating trays by the flange. Understand thermoforming basics to sidestep this common mistake and prevent costly downtime.

COVID-19 taught American manufacturing the value of localized supply chains. Prior to the pandemic, we were already witnessing a reshoring trend in manufacturing. This is because international supply chains, especially those rooted in regions with escalating geo-political and socio-economic tensions, pose risk to supply.

Social media puts grassroots pressure on international brands as consumers discover and rapidly distribute information relating to the social and environmental transgressions that exist in these various countries of origin. Consumers’ thirst for supply chain transparency provokes company stakeholders to reassess their risk mitigation strategies, which for decades has assumed a continuation of normalcy.

Market leaders are constructing localized supply chains to take advantage of Factory 4.0 and Industry 4.0 technologies, where fully automated factories reduce the costs of operations through continuous efficiency gains not possible with manual, international labor. Now, a groundswell of companies are looking to reconfigure their supply chains to reduce dependency on the many factors outside our control — such as a global pandemic.

Avoid the “flange pitfall” in automating with dunnage trays.

Used for work-in-process operations, dunnage trays are a simple but important component of complex, automated assembly environments. Yet they are often overlooked in the design of smart factories. These are thermoformed trays with multiple, custom cavities that hold, protect, and orient products for shipping and for transporting parts through assembly operations. Trays are fed into automation cells, where robots pick or place components for assembly.

Successful integration of dunnage trays into automated assembly equipment is largely based on how the equipment locates the trays; and how the robots locate the tray cavities for the pick-and-place operations. To ensure this is done right, it’s important to avoid one early pitfall: how trays are identified by the robot that locates the trays.

Too many times, companies enlist suppliers to design and manufacture dunnage trays only to discover that their assembly equipment has been built to locate thermoformed trays on literally their most frustratingly-inconsistent feature: the flange. This is a plastic surface around the edge of the formed sidewall of the tray at sheet level, and is fundamental to the thermoforming process — it allows the die to cut the formed part from the sheet without cutting into the tray itself. But it was not intended as a parameter for automated systems to locate the tray. 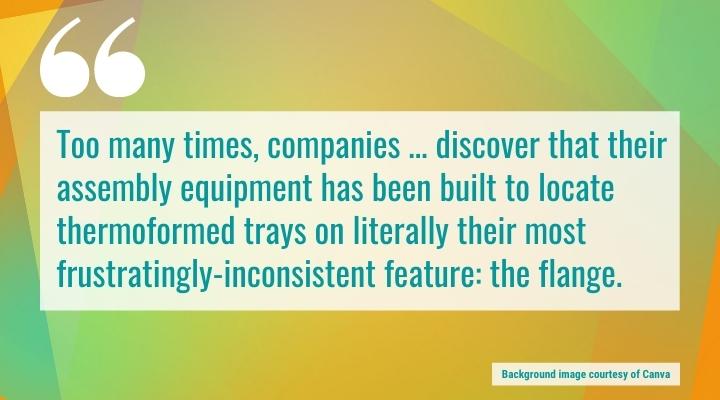 It is a major pitfall to instruct robotic grippers (or other end effectors) to locate trays based on the flange because the flange dimension must be constant and consistent. Yet this is extremely challenging, due to variances in the die cutting tolerances that are inherent in the thermoforming process.

Thermoforming can be reduced to two basic processes: the forming station and the cutting station. The form is the result of the heated plastics’ impression on the aluminum tool, which is rather consistent. The only variability here is fluctuation in the material temperature, which can impact the form. Therefore, this is continuously monitored throughout production to ensure that the plastic is in the ideal state to achieve a quality form.

Then, there is the die cutting stage: Once the part is formed, it indexes forward; but it isn’t completely cooled. It is in a sort of limbo, somewhere between being completely malleable in the form station, and completely fixed after cutting.

As the part cools while it moves into the cutting station, it shrinks. This shrinkage varies depending on the type of material, material density, and overall square inches of the formed part. Shrinkage is incorporated into the design of the die and tooling — but it isn’t an exact science. It is a calculation based on experience, and trial and error.

Another challenge to achieving extremely tight flange tolerances is how the plastic is pulled through the machine. Thin-gauge thermoforming uses plastic material in roll form. The plastic is guided into the machine on chains, where it is then pulled through the oven, form, and die cutting stations. Slight variances in material tension from one side of the sheet to the other can impact the orientation of the formed tray on the sheet itself. This variability is such that when the tray is brought into the die cutting station, it is not 100% lined-up with the die. This issue can be minimized with locating features in the thermoform tooling that mate with corresponding locating features in the die and guides the die over the formed part for cutting. Locators work to correct inconsistencies in the form orientation on the sheet that results from the tension of pulling the material through the machine.

When you conceptualize the orientation of the form in the die, think of it like framing a picture. In this case, the picture is the form, the frame is the die, and the extra space between the picture and frame is the flange. While you work to get the picture perfectly centered in the frame, the picture can be a bit too high, too low, too far to one side or the other. When automation requires that the picture always be centered in the frame, and when the thermoforming process itself has fundamental limitations to achieving this, beware: Regardless of the experience or skill of the thermoformer, the slightest inconsistencies in fit can cause entire assembly lines to go down.

In summary, the estimated shrinkage and attempted compensation through tooling and die design, married with the variable orientation of the form on the sheet for die cutting, makes it challenging to produce dunnage trays with extremely tight, and symmetrical, flange dimensions. This is problematic for successful integration of trays into automation equipment that locates its assembly operations by the flange.

The solution is simple.

The best solution for overcoming the pitfall of using flanges to locate trays is the simplest: Avoid doing it altogether. Instead, develop automation that instructs robotic systems to locate the dunnage tray by its form, using, for example, the form’s exterior sidewalls.

Doing so will save you countless headaches for having developed the most sophisticated smart factory, only to find that the smallest of details — how the robots locate the tray — impacts the success of your entire operation.

As more companies bring manufacturing operations back to America, dunnage trays will play a critical, though often overlooked, role in executing the technologies of Factory 4.0.