HomeMachinery & AutomationRoboticsHow Robotics Beef Up Food Packaging Automation
Recent
Machinery & Automation
Best in New Food and Beverage Packaging
May 17, 2022
What’s Next in Digital Printing of Beverage Cans
May 17, 2022
Breaking News in Flexible Packaging
May 16, 2022
New Thermoforming Machine Optimizes Mono-Material Processing in Modular Design
May 16, 2022
NFT Packaging Opens the Door to the Metaverse
May 13, 2022
Scientists Detect Microplastics in Human Blood
May 13, 2022
Ingredients-Printed Cups Maker Ready to Grow
May 12, 2022
New Retort Pouch Contains Minimum 30% PCR
May 11, 2022
Robotics
brought to you by 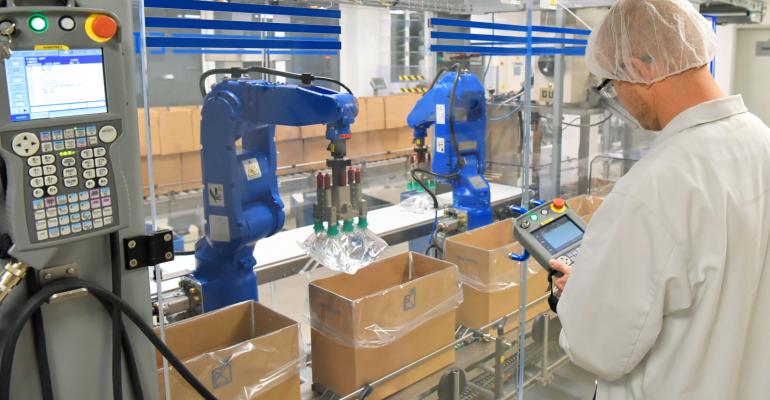 The number one operational improvement in the crosshairs of consumer packaged goods (CPG) companies in the food sector remains automation, particularly robotics. So much so that actual robotic usage continues to outperform end-user forecasts.

According to the Trends and Advances in Food Packaging and Processing report from PMMI, The Association for Packaging and Processing Technologies, in 2014, companies forecasted robotics would be operating in 82% of manufacturing plants in the US. In 2018, actual usage reached 88%. In 2019, the number of companies using robotics will tick up to 90%. In the next five years, nearly all manufacturers will likely be operating robotics somewhere on the plant floor.

Here are four recent improvements that are helping drive this wide-spread adoption:

1. Robotics today are more affordable than they have ever been.

The initial machine cost of robotics continues to decline, and installation and integration service costs are falling. Reduced programming costs have cut the average time to achieve return on investment (ROI) in the last decade. In addition, simplified programming and service routines are mitigating the need for retaining costly robotics experts as full-time employees.

2. Robots can be cleaned easily.

As technology has improved, robots can now perform in a range of environments while still conforming with the Food Safety Modernization Act (FSMA). Sanitation issues were once a deal-breaker for food. But new washdown compatible robots are available and popping up throughout the production line — to the extent that washdown-capable sanitary robots are also finding applications outside of food and beverage in industries that still require hygienic production environments, like pharma and medical device manufacturing.

Washdown-compatible robots provide tangible benefits to food producers by reducing operational costs, improving food safety, and eliminating tasks that pose an injury risk to human operators. The development of hygienic robotics has also drastically reduced the maintenance costs of robots operating in harsh industrial environments, by up to 60%.

Along with other technologies, such as vision systems, robots can process information at a greater rate and operate at far higher throughput levels than that of a human worker. Besides improved speed, robots offer a higher level of accuracy and repeatability. This not only improves the rate of production but also reduces downtime and waste caused by human errors, such as incorrect positioning of a product.

With developments in complimentary technologies, such as gripper technologies, the ability of robots to handle more fragile products and reduce damage has improved significantly. As this technology continues to grow, this will broaden the potential applications for robot usage. For example, engineers have developed a sensor small enough to be placed on the end of a glove that can accurately measure the direction and intensity of pressure. The sensor is so accurate that a robot equipped with it can safely contact a blueberry or raspberry without crushing it.