Meet Baxter, which is unlike any robot you’ve seen 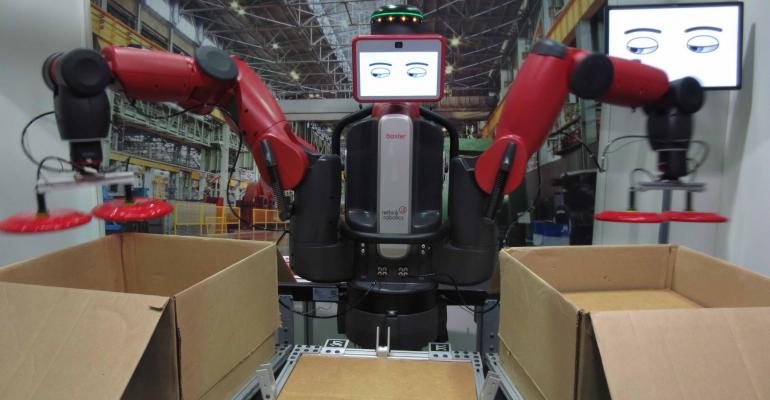 Baxter the Collaborative Robot can multitask.

When I first met Baxter the Collaborative Robot it was loading red discs into corrugated cases. Baxter was so unlike any other robot I’ve seen that it stopped me in my tracks. I wasn’t the only one Baxter affected in that way during Pack Expo at booth E-9804 of Rethink Robotics.

In short, Baxter costs $25k, is easily trained and retrained and is redeployable. It looks humanoid in an approachable way, which is by intent because Baxter is engineered to work in close proximity to human workers.

Some of Baxter’s other unique features:

Has 7 axes of movement per arm;

Requires no programming and is said to be trainable by line workers in minutes.

Baxter also has a pretty good memory and is capable of recalling and then performing more than 100 tasks.

The company has made 100 separate installs totaling 500 Baxter units in operation in the 18 months it has been available. Foellmer estimates that, conservatively, 30% or more of those involve packaging including for  pick-and-place operations for plastic parts.

Foellmer says packaging supplier Genco is a “heavy user” of Baxter including one application where the robot removes sealed trays of product from a rotary heat sealer. In a video, a Genco project engineer called the deployment “a fantastic experience. Baxter is a workforce multiplier.”

Coinciding with Pack Expo, Rethink Robotics announced the availability of a new Robot Positioning System, which allows the robot to manage and adapt to dynamic (real-world) environments using its existing, embedded vision system. Examples include common plant-floor variations that can occur, such as tables being bumped, fixtures being moved and more. The robot is now able to recognize the original locations of the “Landmark” markers, and, when those locations change slightly, can mark the new locations and adjust its movements accordingly.

On top of all that, Baxter is made in the U.S.