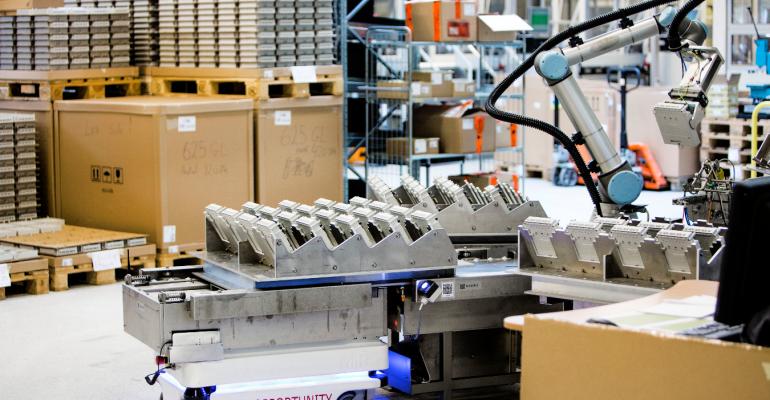 Mobile collaborative robots adapt easily to changes in production, making them a go-to solution for many manufacturers.

Move over automated guided vehicles (AGVs). Autonomous mobile robots (AMRs) are taking over for packaging line replenishment and other manufacturing tasks because of their easy adaptability to ever-present changes in production. Here’s what you need to know before adding them to your team.

In a recent Design News article “Boom in Robot Advances Expected Over Next Three Years,” analysts from research firm IDC report on a number of trends in robot development and deployment. For one, mobile robots are gaining traction over their stationary siblings, partly because of their ability to adjust as needed.

“The most interesting development is the growth of the mobile platform robot with the capability to attach a variety of components. These are service robots for warehouse and fulfillment centers,” John Santagate, research director of service robotics at IDC Manufacturing Insights tells Design News.

A player in the area, Mobile Industrial Robots (MiR) has experienced this growth up close. In 2017, MiR saw revenues from its AMRs triple, fueled by the company’s spring 2017 launch of the MiR200. This AMR can lift 200 kilograms (about 440 pounds), pull 500kg (more than 1,000 pounds), is approved for electro-static discharge (ESD) and certified for cleanrooms. MiR CEO Thomas Visti says in a press release that another factor in the revenue spike is the company’s new user-friendly robot interface.

The Danish robotics manufacturer expects its progress to continue in 2018 and is gearing up for it. It plans to open a new office in San Diego, CA, on April 1, and has expanded its leadership team by hiring former PricewaterhouseCoopers (PwC) and LEGO Education International managing director René Tristan Lydiksen as chief commercial officer (CCO). And Danfoss research and development director Søren Nielsen comes in as chief technology officer (CTO) for MiR, replacing Niels Juls Jacobson who moves to chief strategy officer (CSO).

According to the ROBO Global LLC benchmark index, which tracks the global robotics and automation markets, MiR now has more robots maneuvering through plants all across the world than any other manufacturer, with 25% of its sales in the United States.

Mullen: Autonomous mobile robots (AMRs) are quite different from traditional AGVs. Both AMRs and AGVs transport items from A to B, but this is where the similarities cease.

The way AMRs navigate is very different from the navigation of AGVs. An AGV can only obey simple programming instructions because it has minimum onboard intelligence. It can only follow fixed routes and, to navigate, it needs to be guided by sensors, magnetic stripes or wires, which often requires facilities to undergo extensive and expensive modifications. If the facility layout changes, which it often does in agile businesses, it is usually quite expensive to change the AGV guidance.

The AMR, on the other hand, navigates via maps that its software constructs on-site or via pre-loaded facility drawings. The AMR uses data from cameras, built-in sensors and laser scanners, as well as sophisticated software, to detect its surroundings and choose the most efficient route to the target. Navigating this way makes the AMR easy and cost-efficient to implement in even dynamic facilities because it only needs a map.

As a result, an AMR can be deployed in just a few hours. It works completely autonomously and if obstacles like people, pallets or forklifts occur in front of it, the AMR will safely maneuver around them, using the best alternative route. This optimizes productivity by ensuring that material flow stays on schedule.

AMRs are crucial for modern manufacturing environments that require agility and flexibility if there is a need for modifications to products or the production line. AMRs are highly adaptable for agile production in any size facility. If production cells are moved or new cells or processes are added, a new map of the building can be quickly and easily uploaded or the AMR can re-map onsite, so it can be used immediately for new tasks. This capability gives organizations full ownership of the robot and its functions rather than being constrained by inflexible AGV infrastructure.

The autonomous operation also makes an AMR far more flexible than an AGV. Being limited to following a strict route that is integrated into the facility means applications for AGVs are limited and an AGV performs the same delivery task throughout its service life. Changes are simply too expensive and disruptive to be cost-effective.

The AMR only needs simple software adjustments to change its missions, so the same robot can perform a variety of tasks at different locations, automatically making adjustments to meet changing environments and production requirements.

How are the company’s mobile robots used in packaging?

Mullen: Mobile robots from MiR can be deployed with a collaborative robotic arm on top, and as a result, can be used as a mobile packing station in warehouse environments, for example.

However, mobile robots are mostly used to transport the items that need to be packed, such as from end-of-line production or a warehouse to the packing station, and then again, handle the in-house transportation of the packed goods to a loading central or warehouse. With the MiRHook solution, the mobile robots are able to tow carts or even a pallet fork, so they can carry full pallets or many packages at the same time.

Why do manufacturers want to use mobile robotic solutions for local deliveries within their facilities instead of humans or towing/pulling?

Mullen: Spending time pushing carts or towing pallet forks is not a very valuable task. The mobile robots free humans from all in-house transportation tasks in production, warehouse or packaging environments, and can therefore be redeployed for more valuable tasks than moving goods from one place to another. So, it optimizes the workflows to have mobile robots.

Because the robots are collaborative, they can work as partners with their human counterparts to boost productivity levels. For example, companies avoid bottlenecks from production to packaging with the mobile robots. Usually, when humans are handling the in-house transportation, the products are batched for a few pick-times per shift because the transportation needs to be done effectively—but this way impacts the production and packaging flow. Because the robots can run deliveries 24/7 and do not need breaks, the in-house transportation can be done on demand, which boosts productivity and efficiency of operations.

What about safety? How do mobile robots react around people and things in a plant?

Mullen: Putting together a safe platform that can navigate through a changing, dynamic environment has tremendous value in the industry and it is our main priority that our collaborative mobile robots are completely safe.

In case of an inattentive human stumbling in front of the MiR robot, a laser vision scanning system will interpret the obstruction fast enough to either reroute or stop to prevent a collision. We are a Category Three, Performance Level D safety system, and we use safety laser scanners, safety PLCs and safety relays to feed data into our planning algorithm. We can recognize obstacles out up to 50 feet and plan to go around them, or make a safe stop to not bump into or hurt someone.

What is the speed range of a mobile robot? Does it depend on what it is transporting?

Mullen: The MiR100 can drive up to 5 feet per second and the MiR200 3.6 feet per second. The reason why the MiR200 is slower is because of the gearing has been changed due to the higher payload, so no, it does not depend on the items being transported—the mobile robots are always able to run with the same speed. The end-user can, however, define the speed: If the robot is driving in high traffic areas, for example, the user can define an area on the robot’s map where it is not allowed to drive fast and then it can speed up again once it leaves that area. Our interface also allows for customer speeds, accelerations and decelerations.

Why does the company think the market for mobile robots will explode in the next one to two years?

Mullen: There is a big market need for smart automation of in-house transportation. Many companies have highly automated productions, and now they are ready to take the next step: to automate material transportation to reduce production bottlenecks and deploy valuable human workers effectively. They need the flexible, collaborative and autonomous features of mobile robots because this is the only in-house transportation method that is suitable for today’s agile businesses.

We see a clear trend where large, multinational corporations have started deploying more and more collaborative mobile robots into their facilities all over the world. Many are still testing various applications, and the more robots they get into a facility, the more applications they often see.

Figures from IFR estimates that the sale of AMRs and AGVs in manufacturing environments will increase by 333% until 2020, and we expect that the figures for AMRs are by far the highest.

How does the adaptability of mobile robots bring more value than a conveyor belt?

Mullen: A conveyor belt is even more fixed and inflexible than the AGV’s. Conveyor belts are for sure still effectively used in production and packaging lines. Today, however, companies often have high-mix characterized productions, which means they need to produce and package flexibly, and they need to be able to move things around.

For example, a production line might need to be connected to one packaging line one week and another the next week, and it is too time consuming to move conveyor belts around. With the mobile robots, companies avoid costly downtime when changing facility layout.

How did the company triple revenues in 2017? Was this attributed to volume, price increases, something else, multiple reasons?

Mullen: This was only attributed to volume. We get a higher demand for our mobile robots every month and volume increased continuously during 2017.

Why is the U.S. growing at 25% for MiR? Is this the company’s largest market?

Mullen: For now, the U.S. is our largest market, and there are several reasons for this. The U.S. market is a bit more mature for automation in general, and many early adaptors of our robots have been American. The U.S. has been one of our core markets since the beginning, and we established our first not-Danish office in New York in the beginning of 2016. So, it is a good market for automation, and we have had a great focus on this market with skilled people in sales and technical support.

Why does the company anticipate to nearly triple sales in the U.S. for 2018?

Mullen: We have many exciting projects going on, and many companies with facilities around the U.S. have started seeing the potential of our robots. We have a great number of customers that, after a period of testing, are starting to re-purchase more robots, so we have a positive pipeline both in new sales and resale.

We will more than double our number of employees in the U.S. during 2018, and being able to support our distributors and end-users even better locally will hopefully be a good investment in achieving this target.