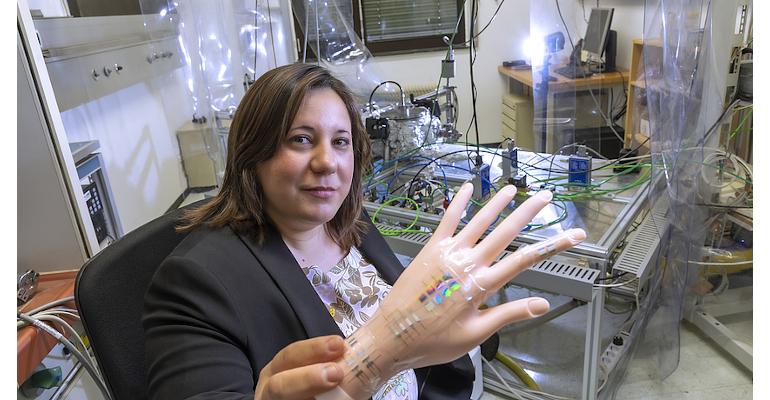 Anna Maria Coclite from TU Graz in Austria and her team have produced a highly sensitive hybrid sensing material that can act as a next-generation smart, artificial skin for prosthetics or robots.
The material has 2,000 individual sensors per square millimeter, making it more sensitive than a human fingertip.

With the aim of creating robots that are as humanistic as possible, scientists have been working for some time to develop various versions of sensory “skin” that can give humanoid machines a similar sense of feeling to natural skin.

One of the latest technologies to be developed for this purpose is from researcher Anna Maria Coclite of TU Graz in Austria, who developed a smart skin for both robotics and prosthetic devices that can sense pressure, humidity, and temperature simultaneously.

Coclite and her team worked on the skin—which has 2,000 individual sensors per square millimeter—for six years as part of a project called Smart Core. The hybrid material’s multitude of sensors gives the hybrid material more sensitivity than a human fingertip, researchers said.

Indeed, developing a sensory material that is as fine-tuned to the environment and as sensitive as the organ that is human skin is a “holy grail” for scientists working in this field, Coclite said. Though there are a number of solutions that currently strive to achieve this, it’s been challenging to reproduce the exact sensing that skin can achieve because the organ itself can feel several sensory inputs at the same time.

Coclite and her team think they’ve come close using a combination of materials that work in a collaborative way to create the sensors, which use electronic signals to function and are composed of a smart polymer in the form of a hydrogel that’s wrapped in a shell of piezoelectric zinc oxide.

“The hydrogel can absorb water and thus expands upon changes in humidity and temperature,” Coclite explained in a press statement. “In doing so, it exerts pressure on the piezoelectric zinc oxide, which responds to this and all other mechanical stresses with an electrical signal.”

Fabricating the skin required material processing of the thin, individual sensor layers while preserving the existence of sensing elements across the entire surface, researchers said. To do this, the team combined three known methods from physical chemistry for the first time: a chemical vapor deposition for the hydrogel material, an atomic layer deposition for the zinc oxide, and nanoprint lithography for the polymer template, they said.

The result of this combination is a wafer-thin material that can react simultaneously to force, moisture, and temperature with what researchers said is an extremely high spatial resolution. The materials emits electronic signals corresponding to each environmental aspect to create the sensing of a particular aspect, they said.

Researchers produced initial artificial skin samples that are six micrometers thin, or 0.006 micrometers. However, the skin "could even be thinner” and still function optimally, Coclite said.

Human skin is, by comparison, 0.03 to 2 millimetres thick, and perceives things from a size of about one square millimeter. The smart skin developed by the TU Graz team has a resolution that is a thousand times smaller, and thus can register objects that are too small for human skin, such as microorganisms, researchers said.

Researchers published a paper on their work in the journal, Advanced Materials Technologies. They envision a number of applications for their smart skin, including as a sensory layer that can independently detect microorganisms and report them accordingly; a prosthetic that can provide the person wearing it info about temperature or humidity; and robots that perceive their environment more sensitively, researchers said.

The skin also has an advantage that makes it well-suited to mass production in that the sensory nanorods that form its core are produced using a vapor-based manufacturing process, researchers said. This already is well established in production plants for fabricating integrated circuits and other parts, which means the process is already set up for manufacturing the smart skin, researchers said.

In the meantime, the team plans to optimize the properties of the skin to improve its performance. Ways that researchers plan to do this include extending the temperature range to which the material reacts and improving the flexibility of the artificial skin, they said.