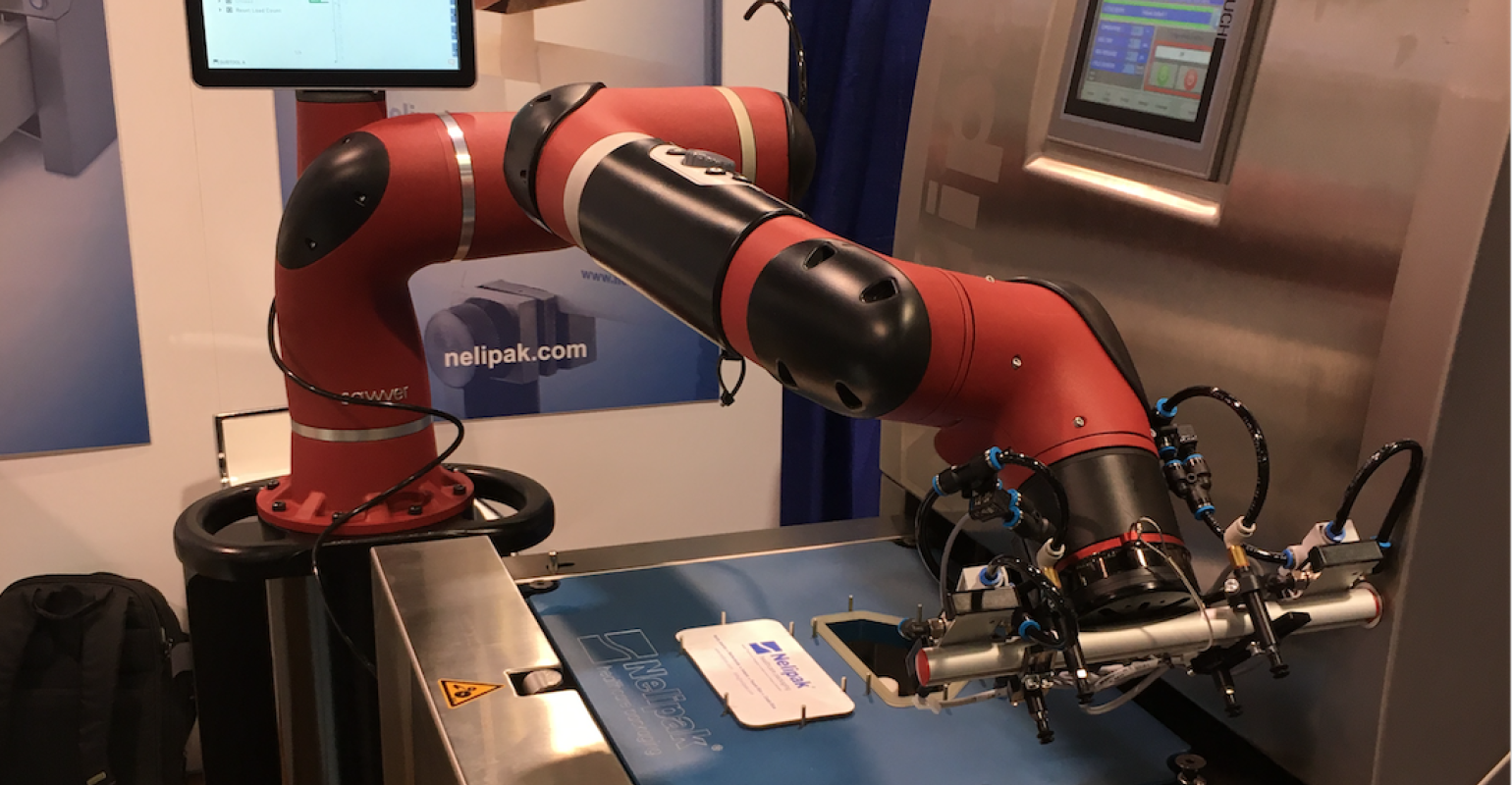 Incorporating robots in the manufacturing process can help reduce human error and improve quality for increased patient safety, Nelipak stated in a press release. In addition, “we’re seeing more instances in which companies want to condense manufacturing space, and cobots can help,” Seán Egan, group marketing manager for Nelipak Healthcare Packaging, told PMP News at the show. The Sawyer robot was closely situated alongside Nelipak’s tray sealer in the booth and was able to navigate around the side of the unit without unintentionally touching it. (It was programmed to press the sealing cycle button after loading the trays and lid into the sealer, as shown in the above image.)

Egan envisions additional applications in which a cobot could be used to load and unload trays from a rotary heat sealing machine as well as pick up trays and present them to printing stations or package testing units.

Nelipak’s demo used a fixed jig to stage the components for the cobot to pick up, but Egan says that an onboard camera could allow it to pick up items from a work station to present to the sealer.

Agile and flexible manufacturing is precisely what Rethink Robotics’s Fair believes is driving demand for cobots. He described what some are calling a “blended or augmented workforce” in which cobots and humans work together. “Companies are reconsidering how they design jobs, organize work, and plan for growth,” he explained at the WestPack Hub.

Cobots can also help address labor shortages in both skilled and unskilled positions, he said. One hurdle, however, is to overcome the stigma that robots replace jobs.

“In the press, there certainly is a lot of discussion about the negative effects of AI and robotics on the industry, but these devices are tools to help create new jobs, gain production efficiencies, and allow workers to focus on the more complex, human aspects of the task,” Fair told the audience.

For instance, “people can do what people do best: the complex tasks that require cognitive abilities and dexterity,” he continued. He showed examples of how cobots like Sawyer can grab several products at once while human operators handle the more complex, hard-to-automate tasks such as folding down box flaps and maneuvering boxes around products.

And cobots can handle tasks that are too difficult or dangerous for humans. “Employees don’t have to reach into machines, reducing the burden on them,” he said.

Another hurdle is to determine the “ROI that makes sense,” and for that companies may need to “look beyond the work cell.”

Considerations for evaluating cobots include safety (to mitigate any risks to employees), ease of use (so that employees find it easy to work with them), approachability (using cobots with smaller form factors and footprints), ease of integration (use of cameras and force sensors), and flexibility (how easy can the robot be repurposed), Fair said.

Fair told the WestPack Hub audience that the Sawyer robot, for instance, has a screen with “eyes,” making it approachable. Fair said that when the robot arrives at a plant, employees are often charmed by his appearance and line up for taking selfies with it.

For successful cobot deployment, companies should target non-value-add tasks, come up with a cobot strategy and roll-out plan, communicate the strategy and plan, involve employees, find cobot “champion,” and look beyond just ROI, he said.

For more details on Nelipak and Rethink Robotics, visit http://www.nelipak.com and http://www.rethinkrobotics.com.

Handing Production to the Robots? It’s Getting Cheap and Easy
Jul 15, 2021