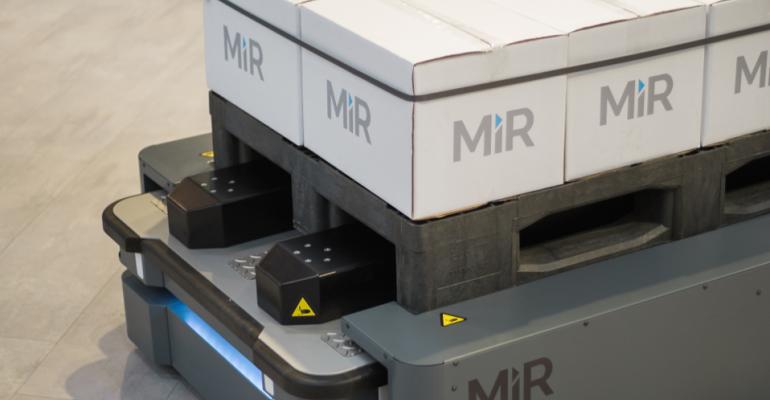 A new industrial-grade autonomous robot handles pallet loads within plants. Photo is showing a demo at a trade show with just one layer of cases.

To optimize packaging line logistics, a new industrial version of a mobile autonomous robot was designed to automatically collect, transport and deliver pallets holding more than 1,100 pounds at speeds of nearly 4.5 miles per hour.

The new MiR500 from Mobile Industrial Robots (MiR) can recognize obstacles in a 360-degree radius—even in busy environments where people and vehicles are moving—allowing the robot to navigate by itself using the most efficient route.

MiR CEO Thomas Visti explains, “Industry is looking for new ways to optimize production and strengthen competitiveness, and internal transport is the last part of automation that is lacking.”

Using mobile robots for delivering packaging materials to the production line is on the rise, as Packaging Digest reported in its previous article “Mobile robots are adaptable packaging line workers.”

Ed Mullen, MiR’s vp of sales, tells us more about this new robust robot and how packaging lines can benefit from using it.

Why is there a need for an autonomous pallet handling in manufacturing facilities?

Mullen: Companies have been automating their production in recent years to optimize workflows and gaining competitive advantages. As for all other internal transportation tasks, people are still spending a lot of valuable time moving pallets around facilities—so there are significant efficiencies to gain by automating this task and redeploying human workers for higher-value activities. Since our MiR500 can find its destination on its own—and always takes the most efficient route to pick up, transport and deliver pallets autonomously—workflows will be optimized and bottlenecks avoided in production due to missing transports.

Autonomous pallet handling is also valuable for safety. The MiR500 is not only autonomous, but it is also collaborative and designed to work side-by-side with humans. This reduces the risk of crashes compared to traditional forklifts that need their own lane and are still not safe—our robot will always avoid obstacles or make a safety stop if a person stumbles in front of it, for example.

Moreover, this robot has a payload of 500 kg and, because the robot assumes heavy lifting duties, it reduces the risk of injury to the workers, who will have less risk of back injury, falls or other issues related to moving pallets.

Specifically, how is the MiR500 designed differently to be bigger, stronger and faster?

Mullen: The footprint of the MiR500 is twice as big as our MiR100 and MiR200 robots. We have designed it for industry use with robust exterior—it is all metal—that can withstand dropped cargo and can easily navigate up and down ramps and even through shallow water puddles.

Our other robots can drive up to 1.5 meters per second (5.4 kilometers per hour or about 3.3 miles per hour). So with a speed of 2 m/s (7.2 km/h or about 4.5 mph), the MiR500 is significantly faster. We expect that the MiR500 often will be used in applications where it transports heavy goods or pallets over long distances, and here it can speed up the process.

[Editor’s note: As a comparison, maximum allowable speed of a forklift is 8 miles per hour, but should be driven about 3 mph when people are around, according to the Material Handling Equipment Distributors Assn. (MHEDA).]

Mullen: From both current and potential customers, we have seen a great demand for an industrial mobile robot that is bigger, stronger and faster than our other robots that are mainly used to transport smaller goods.

The MiR200 with the MiRHook can, as you say, tow 1,000 lbs. but we will see other applications for MiR500 since the payload of 1,000 lbs. can be placed directly on the robot. We expect that the pallet lift application will be used by around 75% of all MiR500 customers, and this is not possible with our MIR200 and MiRHook.

We will also see many big conveyor bands or belts placed on top of the robot. The complete solution with a larger footprint, high payload and extra speed will open up for many new applications and markets.

What features on the robot ensure pallet loads remain stable during transport? Do the pallet loads have to be unitized first (stretch wrapped, for example)?

Mullen: The robot has an anti-slip surface and a low center of gravity to ensure a stable transport. Whether the loads have to be unitized one way or another first depends on the loads being transported (payload, size and height) and the speed of the robot.

Can the MiR500 be used to deliver pallet loads of packaging materials to the packaging line as well as take full loads from the end of the line to a warehouse or truck?

Mullen: Yes. Our robots are flexible and can be used for various applications within the same facility.

Users can develop and replace top modules—such as pallet lifters, conveyor belts and robot arms—so the robot can be used for different transport purposes. Who manufacturers/supplies these different top modules?

Mullen: Yes, our robots are a flexible, standard platform for which it is easy to develop and deploy different top modules for customized used. Usually, the top modules are manufactured by our distributors or by integrators. In our online marketplace, MIR TradeForum, customers can see some of the top modules that have already been developed. 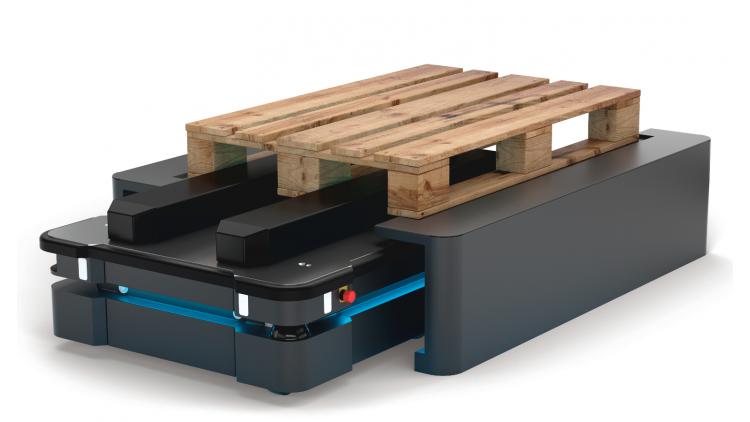 Mullen: Yes. MiR manufactures the MiR500 Pallet Lift, which is made for euro pallets. However, as for all other top modules, integrators or distributors can also develop pallet lifters for American pallet sizes and integrate them. We provide guidelines and specifications, but the principle is the same; we provide a flexible platform where pallet lifters of different sizes can also be deployed.

We have had a high demand for the transport of euro pallets, which is why we are offering that specific solution for now. But as some very big markets (America, for example) use other standard sizes, we will also consider different pallet lifters to be offered by MiR.

Are the specially designed pallet lifters and frames standard with the MiR500 or are they an additional cost?

Mullen: They are an add-on and have additional cost as not all companies will use this specific application.

How many docks [I’m not sure what you call the pick-up or drop-off locations] come standard with a MiR500? Does the dock also charge the robot? If not, how is the robot charged?

Mullen: We call them MiR500 Pallet Racks. As the pallet racks (docks) are an add-on, the customers identify how many they need and order them additionally. The racks are only for delivering and picking up pallets. There is a separate charger where the robot can automatically charge. It charges 80% in one hour and it can be part of the robot’s missions to go charge when it has a low battery level.

Similar to your other products, the MiR500 can be programmed without prior experience. How is it programmed?

Mullen: Yes, we have an intuitive web interface that can be controlled via smart phone, tablet or computer. In the web interface, you can edit the map of the robot, which it uses to navigate, you can add positions, make as many missions (tasks) as you want, define preferred routes or de-accelerating zones, for example, and much more.

The MiR500 uses the same interface as the MiR100 and MiR200. A few tasks concerning the ability to lift pallets are also added.

The MIR500 is also part of our fleet management software that we recommend using when a customer has more than two robots to prioritize tasks and control the robot traffic.

Again similar to your other products, the MiR500 is flexible and user friendly. Can you give us examples of both?

Mullen: The intuitive web interface is both an example of the flexibility and user friendliness of our robots. The customers have full ownership of the robots from the very start because they can program the robots easily. At the same time, there is no limit to the number of tasks that the robots can do, so the same robot can automate the material handling both within the manufacturing site, between manufacturing and warehouse, or in the warehouse.

With the ability to quickly and easily integrate different top modules, the MiR500 can be equipped with pallet forks, conveyors, a robot arm or other options to support a range of applications, which also underlines that the MiR500 is user friendly and flexible.