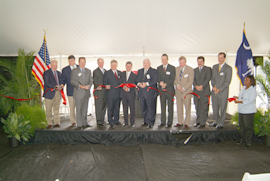 Noted Eastman Chemical chairman and CEO J. Brain Ferguson during the grand-opening ceremony, "We are much stronger today than we were several years ago, and PET is a very important part of that strategy. We are the largest PET producer in the world, and this plant is the most competitive facility for PET in the world."

Eastman Chemical's IntegRex technology, used to produce its ParaStar PET resin for carbonated soft drink and water bottle applications, is a "revolutionary" process, according to the company, that significantly changes a number of the manufacturing process steps, while completely eliminating others, such as solid-stating, for example. As Ferguson told PD during an interview of Eastman Chemical executives at the event, "From the front to the back, there is little that resembles a classic PET manufacturing plant. It is a dramatically new design."

Added Gregory O. Nelson, executive vp for Eastman Chemical, "The total IntegRex effort was an intensive look at every aspect of the process."

In-line with what Ferguson calls Eastman Chemicals' core value propositions of "greener, smarter, cheaper," the new IntegRex operation not only has a significantly smaller environmental footprint than a traditional PET facility, but it also uses 40-percent-less energy intensity to produce a pound of PET versus the classic manufacturing process. And, the resin's energy-efficient benefits are said to carry over to the customer, as well.

"If you take that 40-percent savings in energy along with the fact that this material heats up and processes faster, the customer gets two things," explained Ferguson. "First of all, they get a bottle that takes less heat to form, and because it takes less time to produce the bottles, they get more capacity on their machines."

The next step, Nelson, Ferguson and Thomas J. Stevens, vp and gm, Performance Polymers Business Organization, Polymers Business Group for Eastman Chemical, told PD, will most likely be the creation of a "full" IntegRex plant, incorporating PTA and PET production in one, continuous process.

"We have implemented the IntegRex front end, the PTA, side of it, in Rotterdam," said Ferguson, "and we've implemented the back end here in South Carolina. The next opportunity for big facility is to marry both ends of that together, and when we do that, we get even more interesting than we are now."

Noted Nelson: "We fully realize that a full IntegRex plant would be the lowest cost in the world and the best material in the world, and we are considering the potential for partnerships on a global basis. But these are very early days."