The many happy returns of the custom preform bins 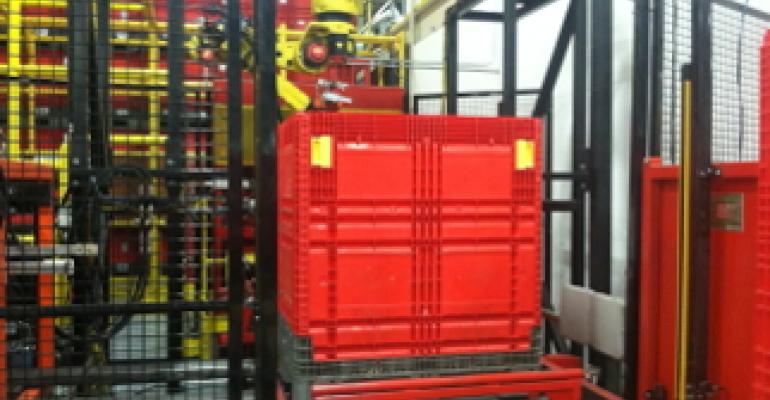 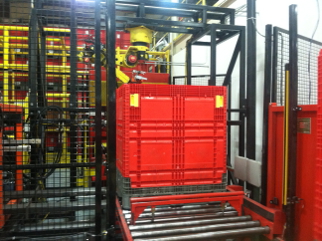 The toughest test for packaging in the supply chain may be time. That is certainly true of reusable plastic containers (RPCs), where durability is as important as protection-whether what's transported is a packaged product or "prepackaging" in the form of PET preforms.

It may be more important for the latter: Preform flaws like nicks and scuffs created during transportation and handling can become magnified during blow molding.

Southeastern Container (SEC), a cooperative of 16 independent Coca-Cola bottlers in the eastern U.S. serving about 34 states and six Canadian provinces, sought an alternative to bulk "gaylord" corrugated containers used to distribute preforms internally that would maintain integrity through dozens of reuse cycles. The preforms are used for bottles from 20 oz to 2L in size.
SEC collaborated with RPC supplier Orbis to develop a custom bulk bin that was tested and customized in size, structure and value-added features to hold the most preforms in the lightest weight possible.

The RPC volume is 50 cubic feet, 10 cubic feet more than the gaylords or the equivalent of about 20 percent more preforms, yielding for SEC a net savings when calculating total costs.

The bin offers four-way forklift entry in the approximately 4-inch tall injection-molded high-density polypropylene base along with the Coke-red PP sidewalls. A snap-on PP lid seals the bin.

At 140 pounds, SEC's lidded bin weighs 20 to 30 pounds less than the competition's, according to Orbis, and offers several unique features:
• The bottom platform features a plastic sheet with integrated dampening springs to deaden the bounce of the initial preforms dumped into the bin to reduce damage;
• Recessed latched handles fold out to permit the sidewalls to be lifted and completely removed so the bin components can be thoroughly cleaned, rather than using hinged sides;
• Radio-frequency identification (RFID) tags are affixed to every bin and lid (see sidebar below).

There are more than 40,000 bins currently in the system, according to Doug Wehrkamp, SEC president, who was the company's director of engineering during much of the bin development and implementation process.

"The gaylords were not heavy, but someone had to ‘wrestle' it from a knocked-down position into an erect form and place it on a pallet-it was not an ergonomically ideal situation," he says. "We sought the optimum, one-piece collapsible plastic bin that would retain to the degree possible what we liked about a gaylord-including light weight and a good return ratio-and that conveniently knocked down. We wanted a bin that would better cube out in a trailer, that we could extend the life, was repairable and was modular in the sense that a damaged part could be replaced instead of having to dispose of the whole unit. Finally, we wanted it used in a system we could automate."

Light weight: When the project started, the bin weight was around 250 pounds. "When it was reduced to around 200 pounds, we still couldn't make the economics work, but when we got to below 150, we could clearly see that there could be an economic payback," Wehrkamp says. "Getting that weight down was crucial."

The weight reduction resulted from various iterations of cross panel designs for the sidewalls and different types of lids.

Through the design process, "bellying" was controlled to prevent the bin walls from bowing outward due to the weight of the preforms-even when they are filled and stacked four high. Bowing negatively affects the lid application, whether done manually or robotically. "Stacking allowed us to shrink the footprint of our warehouse storage by 15 percent," Wehrkamp adds.

Good return ratio: Wehrkamp estimates they got about 10 use cycles on a gaylord. SEC sent about 5,000 unusable gaylords yearly into the recycling stream.

Each bin makes about 12 to 15 roundtrips yearly, with SEC's goal a minimum of 100 to 150 turns over a bin's lifetime. "We're about halfway there and we don't see any significant issues or wear with the bins," Wehrkamp reports. "There's nothing to indicate that we're not going to be able to achieve that or perhaps as high as near 200 turns."

Shrinkage has been minimal: "The number of bins lost is staying well below one percent," he adds. "Economically, we've been very happy with the returns-it's met our expectations in all areas."

Efficient knock down: Technically, the bin is made up of several components, including removable sidewalls. But according to Wehrkamp, it's effectively a single-unit bin. After use, the bin is manually collapsed for return. "The latches are pressed and the four side walls collapse," says Wehrkamp of the simple process. It can fold in several ways, but due to the programming on the robotic erecting system, the sequence doesn't matter, he adds.

A bin has a collapsed height near 13 inches, which at a 4.8:1 ratio is just short of the 5:1 ratio the gaylords had provided. "It's not exactly what we'd originally anticipated, but was extremely close, so we consider that successful," reports Wehrkamp.

"We were able to clean up our operations from a housekeeping perspective," Wehrkamp points out. "We maintain extremely clean plants, but the amount of dust and contamination that was removed from our plants was a pleasant surprise."

Wehrkamp says the bottling operations receive the same benefits the blow-molding facilities enjoy: "They've got no corrugated or wooden fiber coming into the operation with the bins. With a plastic bin, you've got that consistency and repeatability day in and day out, including the exact same footprint that also handles well on our equipment."

The project also included robotics, which were first implemented at the Asheville, NC, facility in 2009-2010 by ProMATIC Automation, a local automation integrator, followed a year later by automating facilities in Bowling Green, OH, and in 2012, in Winchester, VA. All three facilities share a similar bin erecting setup; Asheville also has an automated bin lidding system.

"ProMATIC came up with a solution for us that was relatively simple in design and effective," Wehrkamp relates. "We achieved the automation piece that we'd anticipated to eliminate a source of workplace injuries and moved that labor elsewhere in the plant."

A robotic cell re-erects the collapsed bins. The flats enter the cell on a roller conveyor, which senses the order in which the bin sides have been folded. That data directs an overhead, inverted six-axis Fanuc M16 robot to sequentially open the bin using grippers in the required order. The system confirms using sensors and air cylinders that the bin has been erected with all sides secure. The bin then conveys to a separate mechanical system that inverts it and cleans it with ionized air to remove any remaining preforms (to prevent loads of mixed-size preforms) and any particulates. The bin is reoriented and released from the cell.

The process, which takes about a minute, was one of the positives from the outset.

"We were surprised on how well the robotic cell has worked from day one," Wehrkamp relays. "It grabs the jaws of the latches and very reliably and repeatedly assembles the bins."

In Asheville, a filled bin is lidded by a robotic system also supplied turnkey by ProMATIC. Larger than the erecting robot, the Fanuc M710 uses two kinds of end-of-arm tools that mate to the robot. In rake-like fashion, the first tool is used to even the level of the preforms, which tend to pile in the middle above the sidewall and may prevent the lid application. The robot then switches tooling and orients and applies the lid using vacuum grippers.

That process also takes about a minute.

"Next for us is to complete the automation on the lid application side," says Wehrkamp, referring to automating that process for the two remaining preform plants. SEC is also looking to automate bag insertion when a vapor-barrier bag is added manually before filling to protect heat-set preforms. He estimates that about 10 percent of the bins need a barrier bag.

While the project has remained locked down for a number of months, Wehrkamp discloses that the financial benefits have become clearer over time.

"We see a reduction the cost of dunnage on our bottom-line financials," says Wehrkamp. "From where I sit now, it's pretty obvious that's had a dramatic, positive impact."

SEC felt that RFID was something that it wanted to have from the outset as the only feasible way to track bin usage.
"RFID was a quick, relatively inexpensive way to capture the number of turns on a bin-by-bin basis at the erecting robot," says Doug Wehrkamp, SEC president. "Otherwise it's very difficult to track that."

He also felt that the most economic time to do that was at the front end during bin manufacturing.
SEC uses a custom tag for bin and lid. The RFID tag, which took some design work according to Wehrkamp, is about 1 inch square and is supplied by Alien Technologies.

SEC supplies the RFID tags to Orbis to affix. Every bin and lid is tagged.

Wehrkamp says that he'd like to leverage more benefits from RFID; at some point, he'd like to track the movement of the bins in and out of the plants from and into the trucks.

"As costs for the technology come down, there's a point where using RFID might become more beneficial than just a simple tracking mechanism we use today," he explains. "Hopefully, we'll be able to build a business case to use that technology further in the next few years."