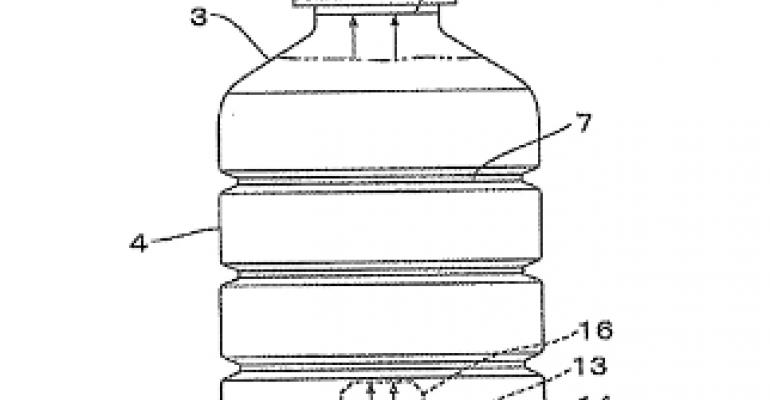 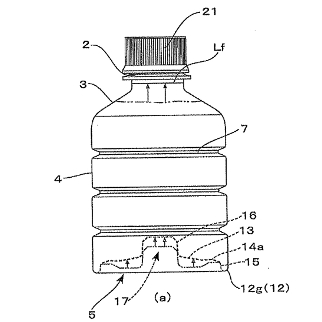 Synthetic resin bottle design withstands vacuum pressure (shown)
This invention relates to a biaxially stretched, blow-molded synthetic resin bottle with a body having high shape-retainability through a bottom plate design that draws upward when the pressure drops inside the bottle. This reduces the internal pressure that can otherwise cause a deformity of the container. The bottle of this invention has a round shape and is provided with multiple peripheral groove ribs in the wall of a cylindrical body. In one version this is a 350-mL PET container.

Sealing station patent helps reduce costs
Thermoform/seal equipment manufacturer Multivac AG has filed for a patent that increases the packaging machine performance and that simultaneously improves the gas flushing efficiency and/or the evacuation efficiency. It can reduce the manufacturing costs for packages having very low residual oxygen values or high oxygen values of more than 30 percent. Suitable for meat packaging, the invention cites sealing station tooling with at least one evacuation aperture for discharging the atmosphere and at least one gas flushing aperture for supplying a gas volume flow.
www.packagingdigest.com/sealing

Fastener made of film can be integrally formed
Chittenden Research and Development LLC (doing business as LYNX Fasteners) recently received U.S. Patent No.8,375,529 for a touch-engageable closure system as an alternative to hook-and-loop fasteners. Intended primarily for packaging and disposables including bags, pouches and other flexible packaging, the TouchE system can be economically die-formed from thin polymer films including HDPE and PP. The scalable system consists of an array of undercut dome-like protrusions that interlock when squeezed together and then peel apart to open. It may be integrally formed of the base packaging material or manufactured as attachable edge strips.
www.lynxfast.com

Lidstock improves strength and peelability
This invention from Crown Packaging Technology centers on an improved peelable lidstock for metal packaging that's sealed directly to the flange of an annular component. The closure is particularly suitable for use on containers intended for packaging food products that require retort sterilization. The closure has the dual objectives of providing a strong seal while also being easily opened by consumers.
www.packagingdigest.com/peelable

Two-compartment container mixes fluids
The patent filing relates to a two-compartment container for holding two fluids in separate compartments until mixing is desired. A door separates the first and second compartments. A shaft holds the door in a closed position. A release component, coupled to the shaft, moves the shaft to a second position prompting the door to move to an open position, thus causing the two fluids to mix together.
www.packagingdigest.com/convertible