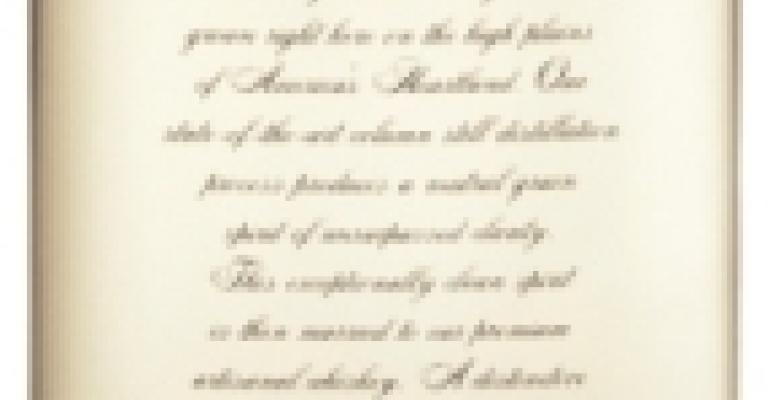 Kansas Clean Distilled isn't your average whiskey. The beverage is made through a unique column-still distillation process to create a neutral grain spirit, which is then married to premium artisanal whiskey to create a drink that's said to be crisper, cleaner and lighter than others in the category.

"The bottle had to convey the personality of the whiskey," he says. "In designing the bottle, I needed a package that conveyed a narrative of clean, gender-neutral and modern, but that had a shape that acknowledged the whiskey inside."

Goldman says he drew inspiration from the elegant, timeless appearance of Chanel No. 5's iconic perfume bottle, a design which has endured for nearly a century. His package idea evolved from a sketch on a napkin to a 3-D rendering of a tall, sleek, slender bottle. He partnered with designer Jeremy Dooley to come up with the custom-tooled font, which would be hand-screened onto the glass label, then sought a packaging partner up to the challenge of producing the unconventional bottle. After months of searching, he connected with Owens-Illinois Inc. to produce the distinctive container.

"They loved the concept, they understood it and said they'd figure out how to do it-they did, and the results are terrific," Goldman says.

The spirit has launched in Missouri and Kansas. Goldman says the company plans to focus on distribution efforts in that region, and to build demand through social networking and other means before reaching into new markets.