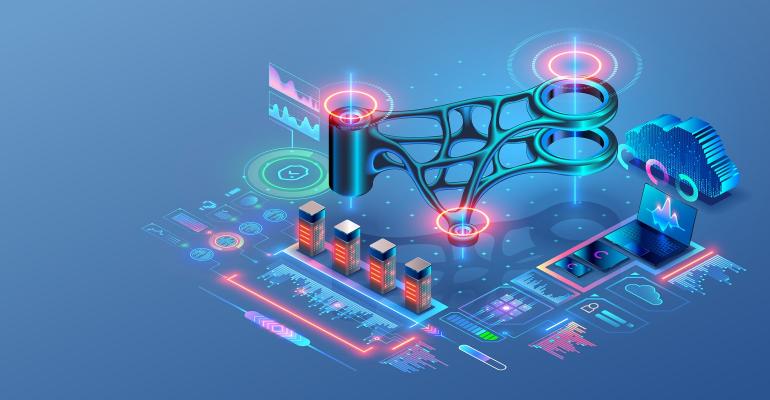 2023 will see the expansion of AI and analytics Software for design engineers. Also, keep an eye out for moves in the metaverse and licensing.

Advances in processing power and data analytics will change the nature of engineering software over the coming year. Over-touted terms like artificial intelligence and the metaverse will likely deliver practical tools for the design engineer. We sat down virtually with Jonathan Girroir, a technical evangelist at Tech Soft 3D, to get his view of coming software developments in 2023.

AI is a Game Changer

As for AI, Girroir noted that in 2023, we’ll see an expansion in the massive amounts of data available through the rise of the internet. "We’ll see a dramatic increase in processing power fueled by GPUs originally designed for gaming," Girroir told Design News. "And we’ll also see steady advances in software algorithms to analyze and use that data. This trifecta will result in the power of AI becoming fully realized across almost all markets."

He explained that AI is 100% the number one game changer in the coming years. "It will change the way we interact with computers just as Google Search did 20 years ago,” said Girrior. “Generative Design is one great example. Being able to use text prompts, leverage huge datasets, and natural language recognition is now driving increased use of generative design, and I think we'll see much more of that in 2023.” He noted this goes beyond generative design and will have a big impact on Computer Aided Engineering (CAE) in general. “For example, you will be able to generate large data sets and then have the system learn from them, predict the outcome of deformations or anything else, give a preview of post-processing results and even suggest certain workflows for optimum efficiency. Or give the system a basic 2D image and then it generates a 3D design from scratch.“

He noted that in addition to CAE, AI will completely revolutionize how realistic digital-twin assets are created. “In the past, designers would sit for hours generating and applying complex repeating textures on objects and environments. This can now be done with AI and will result in a far greater volume and variety of assets.”

Analysis from Beginning to End

Girroir believes that powerful tools, massive amounts of data, and the power to process that data will drive the integrated use of analysis from the beginning of the design process to the end of production. “Why have these tools all of a sudden become incredibly powerful? It's because of the massive amount of data the AI now has to learn from. With AI being able to learn more and faster, we now have the power to analyze design ideas at the very beginning of the process.”

He explained that we are seeing more and more companies analyze everything starting at the very beginning of the design process. “They run simulations, predict outcomes, and make better decisions in all aspects,” said Girroir. “Instead of running analysis far down the design path once you have a close-to-final design to make sure it meets your specifications and then iterating from there until it meets specifications, we are seeing the evolution of analysis tools at your fingertips at all points of the design process, from the initial conception of the idea to designing it.”

A Different Way to Capture Reality

Girroir noted that we’re seeing new ways to make the design process virtual. “When it comes to reality capture, the current options are to use a scanning device to create point clouds or photogrammetry technology where a 3D mesh is calculated from images taken from different angles and positions,” said Girroir. “However, we see a new technology called neural radiance fields (or NeRFs)  taking hold, which takes as input images or videos similar to photogrammetry but then uses deep learning to essentially "learn" the scene and can generate novel views of high-quality from it that can be turned into triangles or rendered directly.”

The Metaverse and Digital Twins

Girroir explained the expansion of the use of metaverse tools. “Most people assume the Metaverse has to be immersive, and they also assume a Digital Twin can only reside on a desktop workstation. As we see Microsoft and Amazon invest in technology to support Digital Twins and the other big players continue to define and refine the Metaverse, we will see the line between these arenas blur,” said Girroir. “Maybe you experience these through a headset, maybe you don't. The key will be the ability to utilize engineering applications within a Metaverse environment to collaborate on designs and monitor Digital Twins. This can be done on a workstation or a mobile device. The Covid-19 pandemic forced us all to collaborate remotely, and this forcing function also showed us that the Metaverse and Digital Twins don't have to be restricted to specific platforms. They can be cloud-based and easy to work with.”

Grroir noted that the licensing model will be used to save costs. “It's no secret that there is a recession looming. Meta, Microsoft, Alphabet, and so many other tech companies have either put a freeze on hiring or conducted mass layoffs,” said Girroir. “The boom initiated by the pandemic has now recoiled, and companies are looking for ways to cut costs while maintaining growth. One key way to do this on the technology development front is to license component technology rather than maintain large teams of engineers and developers. For example, instead of having an army of graphics developers, you can license a graphics engine. Utilizing component technologies for specific functions is efficient and cost-effective, especially as today's components are solid and reliable.”