Bioplastics land use: No threat to food or feed stock 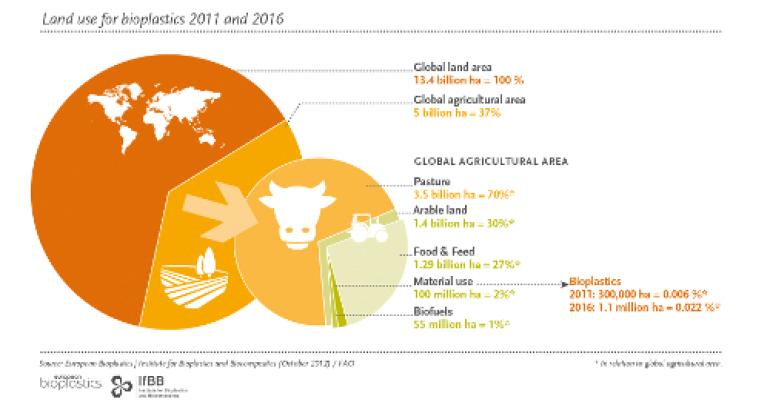 The surface required to grow sufficient feedstock for today's bioplastic production is less than 0.006 percent of the global agricultural area of 5 billion hectares. This is the key finding by European Bioplastics, based on figures from the Food and Agriculture Organization of the United Nations (FAO) and calculations of the Institute for Bioplastics and Biocomposites (IfBB, University Hannover, Germany).

In a world of fast growing population with an increasing demand for food and feed, the use of feedstock for non-food purposes is often debated controversially. The new brochure " Bioplastics: facts and figures" published by European Bioplastics, moves the discussion on to a factual level.

Minimal fraction of land used for bioplastics
European Bioplastics market data depicts production capacities of around 1.2 million tonnes in 2011. This translates to approximately 300,000 hectares of land-use to grow feedstock for bioplastics. In relation to the global agricultural area of 5 billion hectares, bioplastics make use of only 0.006 percent. Metaphorically speaking, this ratio correlates to the size of an average cherry tomato placed next to the Eiffel Tower. 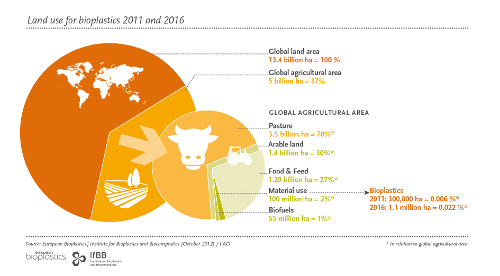 According to European Bioplastics, increasing the efficiency of feedstock and agricultural technology will be key to assuring the balance between land-use for innovative bioplastics and land for food and feed. The emergence of reliable and independent sustainability assessment schemes will also contribute to this goal.