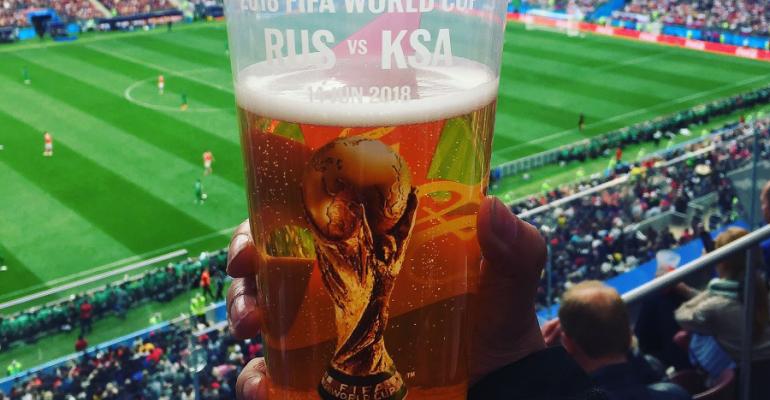 Lights in the base of the Budweiser 2018 FIFA World Cup cup lit up and flashed whenever the crowd roared.

Anheuser-Busch InBev—no stranger to innovative packaging design—outdid itself at the 2018 FIFA World Cup tournament in Russia, with collectible Budweiser cups that lit up in response to crowd noise. Circuitry built into the beverage packaging responded to environmental sound with light-emitting diodes (LEDs) that flashed, visually ramping up the fans’ energy. The cups had two levels of activation, so louder noise amplified the already flashing lights.

The brand owner’s Global Innovation and Technology Center (GITEC) in Leuven, Belgium, which created the 500-mL beer cups, also took an ambitious approach to graphic design. The graphics on each cup were keyed to the match during which the beer was sold, featuring, for example, the competing countries’ names and flags.

Anheuser-Busch InBev created more than 70 versions of the cup to incorporate imagery from the many countries that participated in this year’s World Cup. It produced more than 8 million cups altogether.

For fans purchasing multiple cups of Budweiser at the 12 World Cup stadiums, Anheuser-Busch InBev provided easy-to-transport cup carriers. “A printed and folded corrugated board with perfectly sized cup cutouts made the ultimate beer-carrying tool for fans. One fan could easily carry eight cups from the concessionaire back to the seats for their friends,” says Keenan Thompson, global innovation director-packaging materials, structure and design at GITEC. See a photo of the carrier here.

Thompson answers Packaging Digest’s questions about the cups’ smart design, materials and distribution in Russia and beyond.

What are the circuits in the cups made of, and how do they work? Do they incorporate printed-electronics technology?

Thompson: The PCB (printed circuit board) is constructed of standard electronic components. The circuit is sleek and simple, carefully built with only the necessities, to reduce complexity and cost. Design constraints, as they often do, worked in our favor on this project. FIFA stadium requirements that kept us from using technologies like WiFi, Bluetooth and radio frequencies actually helped point us in the direction of audio technologies.

When we started defining the design criteria for this project, I never would have guessed that with Putin attending the games in person, we had a chance of losing all ability to communicate to the cups, via radio frequencies, for example. [This could have occurred if the Russian president’s protective-services team were to shut down communication frequencies within the stadium for security reasons.] Additional FIFA stadium requirements to avoid projectiles and sharp objects in stadiums also helped drive overall cup design into a package that was extremely efficient and easy to use for the consumer.

The Budweiser Light Up Cup project serves as an internal reference point for all future smart, connected packaging initiatives. I work in GITEC, and my job is to create and expand technology platforms based on the commercial needs of the business. These types of platforms are not built overnight. The consumer-facing smart packaging technology platform work began more than four years ago with small scale experimentation on the Oculto brand bottle labels in the United States.

Printed electronic components will be a key technology in future projects, as we seek the right balance of desirability, viability and feasibility in each initiative. When you print electronic components, the experience can be much more magical, integrated and seamless for the consumer and the brand. The printed-technology landscape is developing quickly, with feasible component solutions coming to life in the form of batteries, visual displays like OLEDs (organic LEDs) and even audio and temperature sensors. We can’t wait to see what the next few years bring! 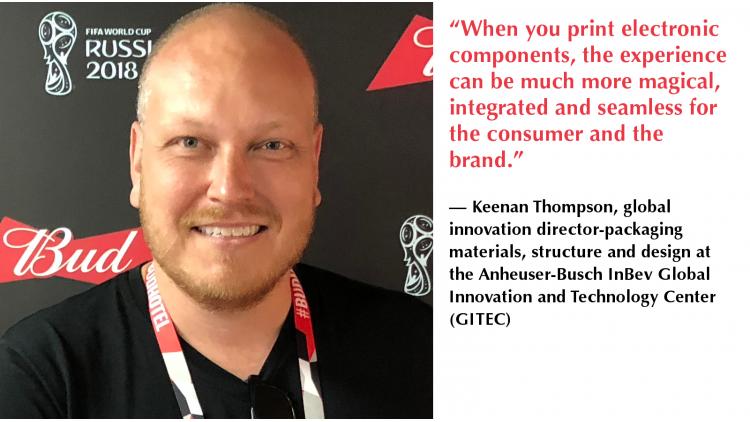 So the cups are essentially equipped with sound-activated circuits?

Thompson: Exactly. The nine LEDs in each cup are activated by changes in sound level. Algorithms are listening for decibel patterns, and the cup reacts visually in the moments corresponding to celebrations, excitement and high energy. A few different patterns of light are displayed accordingly.

How were the electronic components incorporated into the cup?

Thompson: The PCB is sandwiched between two injection-molded components. The base is a translucent Budweiser red to maximize the impact of the LEDs, and the cup itself is clear. We used a unique red PCB board to not only keep the total design on brand, but to camouflage the electronics. 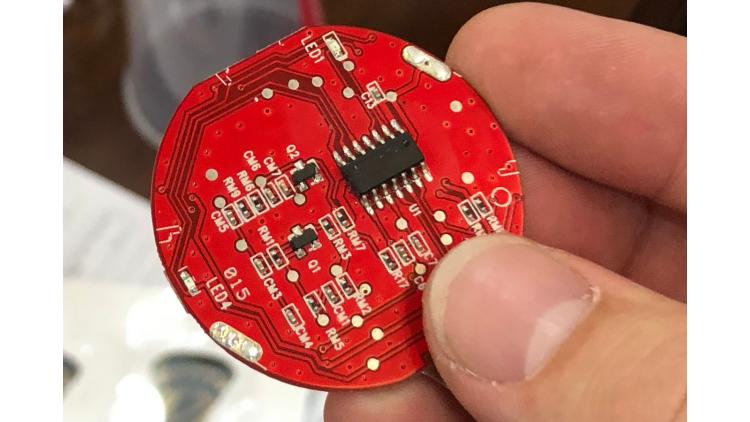 How were the electronics secured so they wouldn’t separate from the body of the cup during distribution or use?

Thompson: The component sandwich locks together in a unique design that can’t be opened by the consumer without the use of a tool. This was a specific requirement of FIFA and required borrowing the best snap-fit technology known in the injection-molding industry. The cups had to be lighter than a cell phone, shatterproof and not come apart into small projectile components by human force.

What was the power source for the LEDs?

Thompson: The circuit is battery powered and lasts up to 36 hours, depending on use.

How were the cups customized for the different teams?

Thompson: The goal was a very high-quality collectors’ cup at the lowest possible price point, with the ability to have numerous graphic designs for this FIFA World Cup event, and into the future. The best way to do this was through conventional and digital printing of in-mold labels (IMLs).

For those not familiar with IMLs, the labels are made out of the same material as the cups, and the ink is inside-printed. When the injection mold is created, the ink is actually molded inside the cup wall, protected from the environment on both sides. This results in high-quality images, no scuffs/scratches and 360-degree graphics coverage for maximum graphic design freedom.

[Author’s note: In a separate project, GITEC used digital printing to produce a customized Budweiser bottle for each player on the winning team in the World Cup Final match, which was the France National Football Team. Each bottle was printed with the player’s name, and the bottles were placed in the athletes’ dressing rooms after the match for celebratory toasting.]

Were the LEDs different colors for the different teams, or all the same?

Thompson: Budweiser red for all! But the PCB design is flexible for future programs.

Were there any issues with cup disposal?

Thompson: We had collection and recycling activities in the stadiums. The cups also served as great collectors’ items for the World Cup fans.

What plastic is used to make the cups?

Thompson: Polypropylene. The clear cup design and label combination give an icy frosted design to the glass when filled with beer, to drive visual appeal. The polymer also keeps the beer colder longer, versus aluminum, during the game to enhance the experience. The material as well as the lip-edge design resulted in a very comfortable, pleasant experience.

Were the cups only distributed in Russia?

Thompson: The “Light Up The 2018 FIFA World Cup” integrated marketing campaign was executed in more than 50 countries, with more than 40 countries leveraging the cups. Half of the cups were sold in World Cup stadiums, and the other half went around the world.

Were they available in bars and restaurants? Could consumers buy the cups at retail, for home use?

Thompson: Yes, our marketing teams leveraged the cups in various programs around the globe, with each zone/country/region putting its own spin on it. The audio algorithms were optimized to function in various environments, including: bars, restaurants, dance floors and stadiums. Even in-home, for sofa watching. 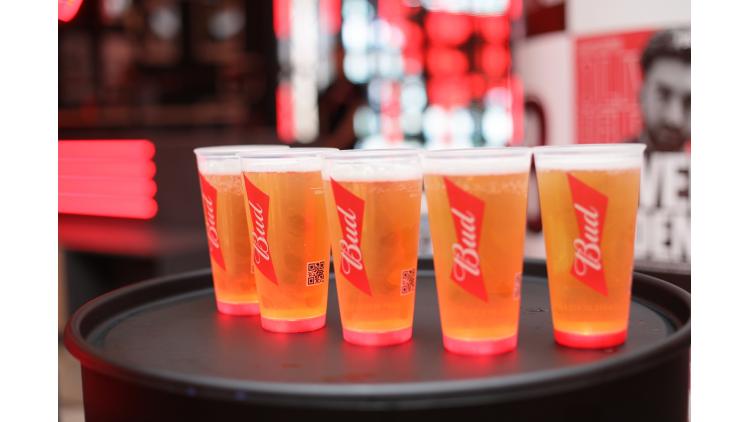