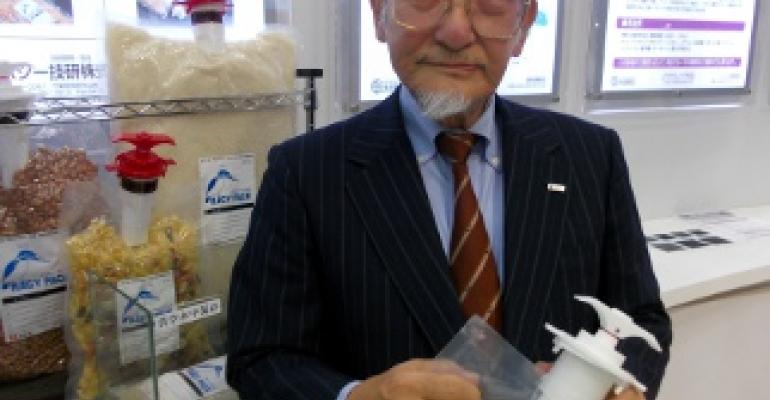 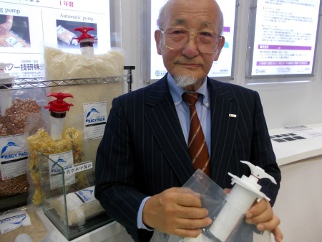 Long before it was ever the well-worn marketing trope, "less is more" was an appropriately succinct encapsulation of Zen philosophy. However lost in translation it might have become in the West, a wholly accurate interpretation is immediately apparent on any shelf in any store throughout Tokyo.

An underlying principle of the Japanese approach towards packaging design is to make the most out of limited resources. Likewise, an understated brushstroke is far more likely than a splash of color to draw a positive consumer response, especially when decorating a structural design whose ingenuity can often be mistaken for simplicity. Japan gave origami to the world. No surprise, then, that the country's packaging industry enjoys nothing as much as stretching its resources within in a tight space rather than extending itself to infinity and beyond.

Serving the world's third largest economy—despite more than a decade of deflation—with a population of 127.5 million enjoying an average per capita GDP of $35,500, Japan's packaging output is valued at around ¥5,689 billion per year. Regardless of the country's relative prosperity, there is an aversion towards unnecessary consumption; further extended by a willingness across the entire supply chain to recycle or reuse spent packaging (including energy from waste), with producers making it as easy as possible for consumers to do so.

Market drivers
With stringent recycling fees calculated on weight and on choice of substrate, there is increasing focus not only upon using less material but on switching formats. Lightweight flexible plastic packaging has been the major beneficiary of this initiative. For example, a unit weight reduction of around 20g achieved by replacing a rigid HDPE detergent container with a flexible pouch, when factored in over a typical run length of 2.5 million, could result in a saving of around $2,000 on one order alone.

Using recycled PE or, better yet, a bio-based alternative, eliminates fees altogether. Toppan Printing's Bioaxx is the first laminated packaging material in Japan to use biomass PE with a thickness of less than 40 micron, designed to produce lighter weight pouches and flexible packaging applications for items such as food and medicine.

The drive to reduce weight is common to all formats. The new Bluelet toilet detergent 0.3mm refill pack produced by rigid plastics manufacturer Kobayashi is claimed to be the thinnest injection-molded container worldwide.

Lighter-weight packaging doesn't just make sense from an environmental perspective; it's also infinitely more user-friendly. While supermarkets are a major component of Japan's retail structure, they are less frequented than the vast network of convenience stores, of which there are more than 42,000 located nationwide; so prolific that it's impossible for anyone in Tokyo to be more than a 200-m walk away from one (compared with Walmart, with just 417 outlets).

With an average floor-space of anywhere between 30 to 250 sq. m and offering on average 2,000 SKUs, the local Lawsons or Family Mart is constantly busy, selling anything from bread to bath gel. Its limited shelf-space largely explains the trend towards uniformly narrow but tall single- or small-portion packs, light-weighted for ease of carrying home.

That's also a structural characteristic further endorsed by that other popular sales outlet: the vending machine. Open all hours to dispense anything from cigarettes to cans of Coke and even live lobsters, vending machines are highly visible endorsements of the Japanese convenience culture. There are more than 5.5 million, roughly one for every 23 people.

The dominance of convenience stores explains to some extent the slow adoption of retail-ready packaging (RRP) in Japan. With a constant flow of shopping data flowing back to head office via the checkout being hugely influential in determining the composition of anything up to eight separate stock refills each day, a more technology-led retail marketing development surely waiting to happen is digitally/variably printed labels, especially so should the Tokyo 2020 Olympics bid be successful.

The other significant market drivers are two key demographics: the unassailable role played by women as purchasing decision-makers, and the country's rapidly aging population. More than 20 percent of Japanese are aged 65+ and represent a purchasing power of $11.3 trillion. How the way in which packaging looks, feels, opens and closes, weighs and is generally perceived by these critical consumer profiles is clearly of primary concern to the rest of the supply chain.

It's in the pouch
New pouch developments at Tokyo Pack 2012 were mostly step-changes rather than breakthrough formats or directions, notes Japanese packaging industry observer Andrew Streeter: "The embossing, attention to detail, sense of precision and way it engages with the consumer is moving the pouch away from being perceived as a low-cost option.

"Whilst some of these pouch refinements are simple but practical, they're adding value without necessarily adding cost, or taking it out either," Streeter continues. "It's characteristic of their approach to developing innovative solutions that the rest of us don't have to the same degree."

For example, Takigawa's EZ Shake pouch is a PET/PE structure incorporating a peelable strip to reveal a perforated base that can either be used as a single-use pest control shaker or else placed in the garden for ants or other insects to crawl inside and then take small particles of poison back to their nest—a process that empties the pouch within 10 days.

Hybrid structures that are part stand-up pouch, part rigid container are becoming increasingly popular in Japan. For example, Totani Giken's Box Pouch (which serves as an on-shelf stand-out, offers storage benefits and resolves reclosability issues associated with existing breakfast cereals packaging; and Hosokawa Yoko's SIP (sleeve in pouch), a package that is three-quarters paperboard box built up from the base to which is glued the top half of a pouch.

Concepts not yet commercialized included a two-ply metallized board/PE single-portion hand-held reclosable pouch for snacking on the go from Dai Nippon; and an LDPE/nylon two-ply pouch that, once cut to form a spout, provides a secure closure by applying finger-tip pressure at the tapered end. Developed by packaging inventor Tadashi Hagawari, it's been patent-approved in the U.S., China and in Europe, and has already attracted the interest of a leading detergent brand owner.

Author Des King is a U.K.-based freelance journalist with 20 years of experience in covering the international packaging and print industries. Information for this article stems from his visit to Tokyo Pack, a trade show organised by the Japan Packaging Institute and held every two years. This year's exhibition was supported by 610 exhibiting groups / corporations extending across 2,289 booths and occupying 21,000 square meters of exhibit space.

Industry statistics
The Japanese packaging industry has virtually plateaued over the past three years and was valued at ¥5,689 billion last year. While paper and board represents almost two-thirds of material capacity on the market, its value is 43.1 percent. Correspondingly, plastics—of which flexibles are enjoying the most dynamic growth—while accounting for 18.7 percent of total volume, have a value of 29.2 percent.

Packaging for the worst-case scenario
Import volumes of raw materials are up by almost 20 percent this year as a consequence of the twin natural disasters of the tsunami and earthquake that rocked the country in March 2011 and wiped more than $300 billion off the Japanese economy. In terms of packaging manufacture, this resulted in a 20 percent loss of all paper and board and 15 percent of printing capacity respectively; the destruction of four ethylene crackers; and the entire hot-melt glue industry.

The food shortages rife in Tokyo at the time weren't due to there being nothing to eat but because of the lack of packaging in which it could be transported and distributed. This has been the catalyst for a number of new solutions designed with disaster relief in mind, including Tadashi Hagawari's pump-operated two-layer LDPE/nylon Hagy Pack, commercialized by Venture Technology that will maintain its powder or granular contents in a fully airtight and fresh condition for upwards of a year.

Central to the 200-micron thickness, the bag's protective capability is a unique PP closure and pump, injection molded in five separate parts and locked in place by means of a tight contact sealing technology—both of which represent the solution's key point of difference. As well as being easy to operate manually, the width of the closure facilitates efficient refilling of the bag.

The format also has potential within the foodservice sector. It is currently undergoing trials in conjunction with a leading Japanese corrugated box manufacturer as a possible alternative solution for the storage of brown rice, which under current food regulations has to be maintained at a constant temperature of 10 deg C.; irksome enough in the restaurant trade, but totally impossible in the wake of a disaster on the scale of a tsunami.