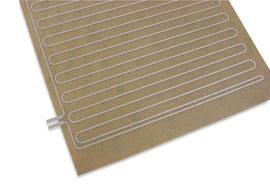 While passive radio-frequency identification (RFID) tag manufacturers race to discover what some in the industry refer to as "the Holy Grail of RFID"—item-level tracking via the five-cent-or-less tag—Suzanne Zaccone, cofounder of GSI Technology, LLC (www.gsitech.com), a Burr Ridge, IL-based label converter with functional printing and inlay-assembly capabilities reports: "The nickel tag is not in our language at all."

GSI has found a sweet spot for smart (or RFID)-label and smart-card products, producing specialty antenna-only and battery-assisted inlays. Unique among its peers, GSI not only prints circuitry and antennas, but it also offers web-based, multicomponent assembly capabilities—a service made possible by the installation in 2005 of a custom-engineered, automated, surface-mount technology (SMT) assembly line.

GSI, formerly Graphic Solutions Intl., LLC, was established in 1985 by sister-and-brother team Suzanne and Bob Zaccone, now company vice chairman and vp respectively, as a nameplate brokerage firm. Within six months, GSI began manufacturing its own products and since then has flourished by pursuing innovative, complementary technologies and strategic partnerships. 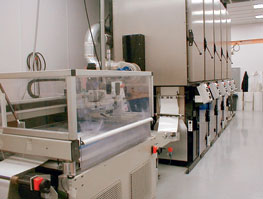 For its first 12 years, GSI was primarily a provider of industrial graphics products. In 1997, the company began exploring the potential of functional printing. "Suzanne and Bob are the visionaries behind functional printing at GSI," relates Adam Laubach, chief technology officer and general manager, Functional Printing, for GSI. "At the time, GSI was looking for ways to diversify and to take advantage of value-added markets and applications. At the same time, functional printing was beginning to emerge, so the company decided to make some serious investments in conductive web-printing equipment."

Its first foray into functional printing consisted of screen-printing conductive metal traces. Today, GSI offers large-scale production capabilities for smart-card and smart-label applications, as well as for medical products such as biomedical sensors for therapeutic and diagnostic applications.

Over the years, GSI has also become involved in electroluminescent (EL) lamp technology, which culminated in the purchase of EL lamp manufacturer BKL assets approximately three years ago. As GSI explains, EL lamps essentially comprise a flat capacitor structure with micro-encapsulated zinc-sulfide-phosphor particles sandwiched between two electrodes. One of the electrodes is transparent to allow light to escape. Application of an AC voltage across the electrodes generates a changing electric field within the phosphor layer that causes the phosphor particles to emit visible light. 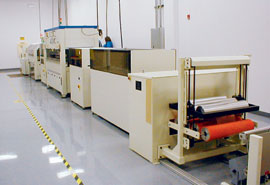 Today, GSI develops EL lamps for applications that include LCD backlights, keypad backlights, automotive instrument panels and nightlights, among others. While GSI has produced EL lamps for point-of-purchase displays, Laubach says that "EL lamps for in-store promotions are usually short-run, specialty jobs, which are less strategic to GSI than areas like automatic and medical-device backlighting applications."

In 2000, GSI began developing and producing RFID antennas printed in web form. Explains Jack Kraemer, GSI president and chief operating officer, "Our move to RFID antennas was a natural progression. It just happened to be one of the largest emerging applications in the market space for conductive printing."

Not quite as natural a next step for GSI, but certainly in line with its goal of providing value-added services, Kraemer notes, was its installation of a fully automated SMT assembly line capable of manufacturing complete smart-label and smart-card inlays, as well as mounting flip chips for almost any purpose. "That was a bit of a leap," he says. "But we felt that having assembly capabilities would allow us to add more value to partners." 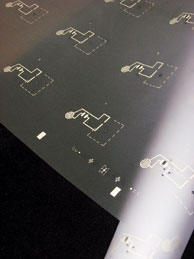 GSI has the capabilities to produce powered smart-card inlays.

GSI's current business is divided into two divisions: Industrial Graphics and Functional Printing. Located in two facilities in Burr Ridge that together cover 60,000 sq ft, the company has 100 employees, roughly split between the two divisions.

GSI's Functional Printing facility is equipped with a range of equipment that enables the company to prepare incoming rollstock, manufacture screens, screen-print product with conductive inks and finish printed product via punching, slitting and/or die-cutting.

During functional printing production, GSI begins with roll-fed stock, typically constructed of "some type of polyethylene terephthalate [PET] substrate," explains Donald Alexander, business manager integrated solutions for GSI. With six printing/drying units available, the converter can accommodate web widths from 14 to 20 in. On the day of PD's visit, GSI was printing RFID antennas on a 20-in., flatbed, single-pass, screen-printing press—referred to in the industry as a web conductive printing line—equipped with 96 ft of drying capacity, resulting in a production speed of 40 ft/min. As Alexander explains, "Speed is the advantage of this type of printing process over sheet-fed printing." Thus, the more drying capacity available, the faster the antennas can be produced, he notes. 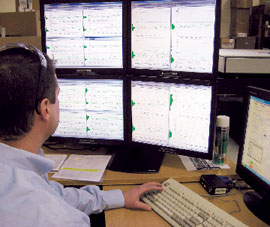 Adds Laubach, "Web-conductive printing is one of our core competencies. There is a lot of art to how you handle the web and make sure everything is dried properly before you do the next pass."

Utilizing conductive inks from a number of proprietary suppliers, GSI can print virtually any frequency, including 13.56 mHz and 900 mHz. "In 900-mHz products," the company relates, "the performance of a printed antenna is equal to traditional copper-etched antennas." The resulting thin, flexible antennas have a thickness of 20 to 40 ga.

GSI's latest Functional Printing equipment installation is the unique, custom-designed multicomponent assembly system. The in-line process assembles semiconductor chips, surface mounted devices (SMDs) and thin, flexible batteries onto a continuous web of printed antennas and conductive traces. The system is capable of mounting electronic components at up to 3,000 inlays/hr on web materials up to more than 6,000 ft long and 20 in. wide.

During inlay assembly, a web of printed antennas is carried from the unwind station through an epoxy-dispensing station. At the next station, RFID flip chips (sourced from a number of proprietary suppliers) are mounted onto the web and then advance to a station where thermal pinpoint heads descend to the web, curing the epoxy. Next, thin, flexible batteries are picked and placed onto the web via robotic arms. The batteries are held in place with epoxy and by their strips until the batteries are cured at another thermal station. A test station follows that can be used if required for the application. Upon assembly completion, the roll can be slit into individual streams and rolled or supplied in production web widths.

Positioned somewhere between 20-cent passive RFID tag inlays and $15 active tags, GSI's battery-assisted, semi-active UHF tags are designed to provide a read range of up to 30 ft for supply-chain management, transport and logistics applications. "GSI is looking at smaller battery technology and trying to take it to new applications," relates Alexander. "GSI has a very defined and developing niche market."

Elaborates Zaccone, "Most of the people who are providing RFID tags right now are not providing them with any power, and so the tags have a very limited read range. You have to be pretty close to the source of the reader in order for it to be activated. But once the battery is onboard, the reader can read the tag in harsh RF environments, like on or near metal containers or packages containing liquids. That's where our advantage is, and that's why we're not going after the single-item use."

Each inlay assembled at GSI is developed and produced to specific customer requirements. "What we are really well known for," says Zaccone, "is taking something from concept, getting it into the development phase and then moving it into production."

While antennas are printed at GSI, the conductive inks and substrates that are used are dependent upon the job specifications, often set by the end customer. GSI works with a wide variety of material and component suppliers. Notes Laubach, "While we are free to work with all suppliers, if a supplier or partner brings us an opportunity, we do everything we can to make sure they participate in the eventual production supply, assuming they have a technical and economic fit for the application."

Adds Kraemer, "Different applications really drive you to different technologies. There are multiple thin batteries out there, and they each have unique strengths and weaknesses. As an integrator, we look to take the best component for the application, whether it's the chip or whether it's the battery."

Bringing all the elements together and combining them in one, continuous assembly process is where GSI sees its major advantage. "When you have one company controlling the process," explains Zaccone, "quality issues and cost considerations can be maintained throughout."