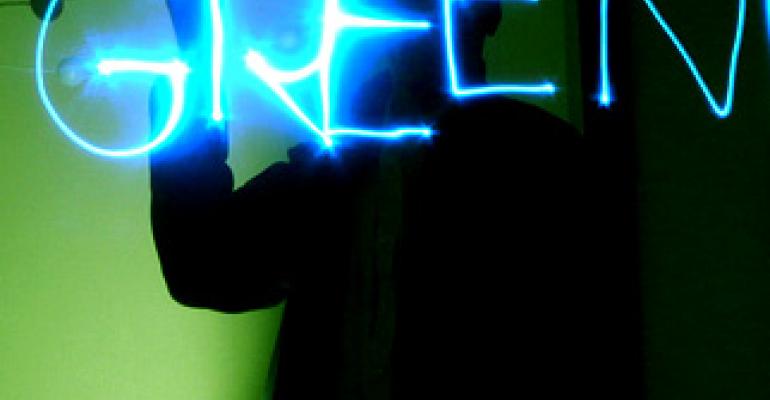 Your eyes aren't deceiving you, but the labels might be. There are more products claiming to be green on the shelves of stores these days, however those 'all-natural' and 'organic' products are likely committing at least one of the Seven Sins of Greenwashing, by not telling the complete truth.

TerraChoice Environmental Marketing recently released its Seven Sins of Greenwashing report, finding that 98% of products surveyed in the United Kingdom (UK) committed at least one Sin of Greenwashing.

Greenwashing is defined as the act of misleading consumers regarding the environmental practices of a company or the environmental benefits of a product or service. For example, the term 'natural' was found on products in the UK ranging from toys and baby care items to health and beauty products. If unexplained and unsupported, the word 'natural' can mean different things to different consumers.

Greenwashing is also changing in creative ways. As a result, a new sin has been identified and added to the original 2007 Six Sins of Greenwashing. The 'Sin of Worshiping False Labels' means that some marketers are mimicking third-party environmental certifications on their products to entice consumers to buy. The full report and handy consumer tips can be found at: www.sinsofgreenwashing.org.

"The good news is that the growing availability of green products shows that consumers are demanding more environmentally responsible choices, and that marketers and manufacturers are listening", said TerraChoice President and CEO Scott McDougall. "The bad news is that TerraChoice's survey of 787 consumer products in the United Kingdom shows that almost all committed at least one Sin of Greenwashing and that some marketers are exploiting consumers' demand for third-party certification by creating fake labels or false suggestions of third-party endorsement. Despite the number of legitimate eco-labels out there, consumers will still have to remain vigilant in their green purchasing decisions".

The Seven Sins of Greenwashing, from most common to least common, are:

1. The Sin of the Hidden Trade-Off occurs when one environmental issue is emphasized at the expense of potentially more serious concerns. In other words, when marketing hides a trade-off between environmental issues. Paper, for example, is not necessarily environmentally-preferable just because it comes from a sustainably-harvested forest.

2. The Sin of No Proof happens when environmental assertions are not backed up by evidence or third-party certification. One common example is facial tissue products that claim various percentages of post-consumer recycled content without providing any supporting details.

3. The Sin of Vagueness occurs when a marketing claim is so lacking in specifics as to be meaningless. 'All-natural' is an example of this Sin. Arsenic, uranium, mercury, and formaldehyde are all naturally occurring, and poisonous. 'All natural' isn't necessarily 'green'.

5. The Sin of Irrelevance arises when an environmental issue unrelated to the product is emphasized. One example is the claim that a product is 'CFC-free', since CFCs are banned by law.

6. The Sin of Lesser of Two Evils occurs when an environmental claim makes consumers feel 'green' about a product category that is itself lacking in environmental benefits. Organic cigarettes are an example of this Sin.

7. The Sin of Fibbing is when environmental claims are outright false. One common example is products falsely claiming to be Energy Star certified.

The 2009 Seven Sins of Greenwashing report focused on children's toys, baby products, cosmetics, and cleaning products because these product categories were found to be the most susceptible to greenwashing and are of particular concern to consumers who want to ensure what they buy is safe for their families and are environmentally responsible. And, in addition to claims of 'natural', claims related to sustainable forestry and 'organic' products were notably more common in the UK than in other nations studied.

"Other important news is that legitimate eco-labeling is nearly twice as common as it was in our 2007 survey, increasing from 13.7% to 23.4% on all 'green' products,” added McDougall. "The 2009 Seven Sins of Greenwashing report demonstrates that consumers do have greener choices in products but that they need to recognize the legitimate labels and ask questions of unfamiliar ones."